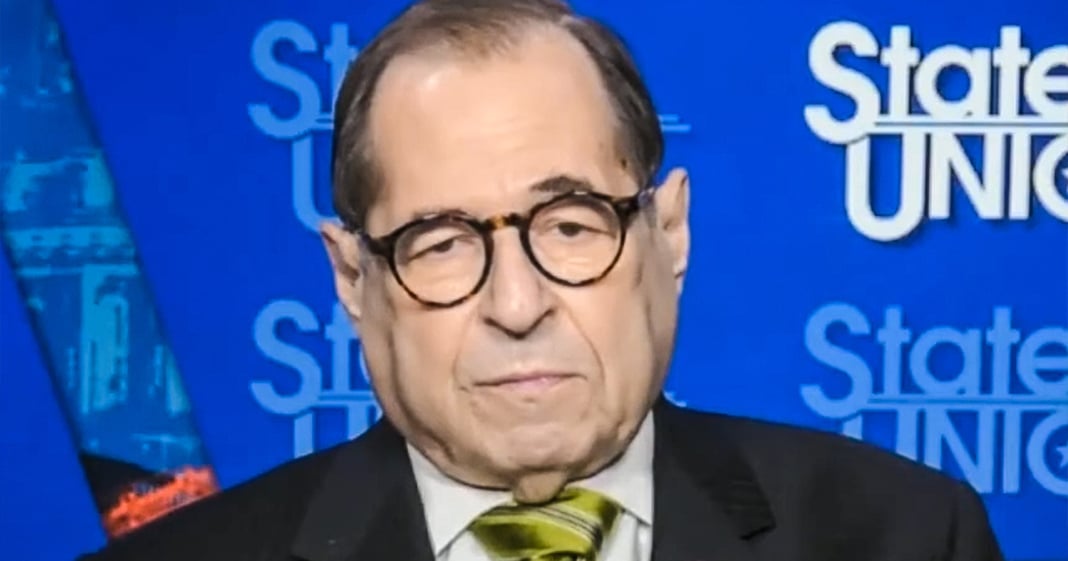 Representative Jerry Nadler, Chairman of the House Judiciary Committee, said that he will not begin an impeachment inquiry into Attorney General William Barr because the corrupt Republicans in the Senate won’t vote to convict him anyway. Unfortunately for Nadler, it isn’t his job to determine whether or not the end result will be what he wants, but he DOES have a duty to carry out these kinds of investigations, especially after the Friday night massacre we just witnessed. Ring of Fire’s Farron Cousins discusses this.

You know, kind of lost in the shuffle of Donald Trump’s miserable failure in Tulsa over the weekend is the saga of a prosecutor in New York, Jeffrey Berman, US prosecutor. Donald Trump and attorney general William Barr attempted to fire Berman late last week, Berman came back and said, yeah, hey, I’m not gonna resign voluntarily. That’s not a thing that’s going to happen. I’m going to continue working here in New York, overseeing by the way, the investigations into Donald Trump and his organization and his finances and all that. You want me gone? You’re gonna have to fire me, to which William Barr said, okay, you’re fired. And then reports after that said, Berman then said, okay, well, if you’re gonna fire me, I will go ahead and resign, I guess. So it’s this whole big thing, essentially, a Friday night massacre by Trump and Barr attempting to purge prosecutors who were investigating Donald Trump himself.

That’s big news, likely an impeachable offense, not just for Donald Trump, but also for William Barr. And we can add that onto the long list of, of potentially criminal activity that William Barr has himself been implicated in since joining the Trump administration. Now here’s the thing, democratic representative, Jerry Nadler, the chair of the house judiciary committee, the committee that would essentially launch an impeachment inquiry should one be warranted and one be warranted right now. But Nadler appeared with CNN’s Jake Tapper over the weekend where he told Jake that, yeah, this looks like an impeachable offense and guess what, Jake, I’m not going to do anything about it. Because those darn Republicans in the Senate, they’re not gonna vote to convict him and remove him. So what’s the point of anything anymore? Here’s the exact quote from Jerry Nadler to Jake Tapper, I don’t think calls for his impeachment are premature, any more than calls for the president’s impeachment were premature, but they are a waste of time at this point because we know that we have a corrupt Republican majority in the Senate, which will not consider an impeachment no matter what the evidence and no matter what the facts. We’re instead going to do what we have to do without that.

Okay. Okay. So, you know Republicans in the Senate are not going to vote to convict and remove William Barr as attorney general. You also knew at the time that they were not going to vote to convict and remove Donald Trump, regardless of what evidence you put forward, you knew that at the time you knew that. And if you didn’t, then you need to step down right now because we all knew it. Literally from day one of the impeachment, I think everybody in progressive media said the same thing, which was that yes, impeachment should happen and two, nothing will come of it because Republicans won’t remove him. We knew it Nadler and I know you did too, but you went forward with it anyway, like you should have because that’s your job. So are you telling me that there was a difference between impeaching Trump and not impeaching Barr? What Barr has done here is criminal.

We have seen people removed from office for doing this exact same thing. This is nothing new. His actions were nothing new, but your actions on the other hand are, and you are out there right now, mr. Nadler confirming all of these horrible stereotypes of Democrats in Washington, DC as weak and spineless, and more than willing to bury their heads in the sands and just let Republicans get away with anything. That’s what you’re doing right now. I agree with you that nothing would come of this impeachment, should you launch an inquiry. But I disagree with you that it’s pointless. It serves a very big purpose. It serves the purpose of showing the American public that, hey, we have a backbone. Democrats aren’t as spineless and weak as everybody thinks we are. Hey, we’re going to make sure that when the history books mention William Barr, they mention that he was impeached.

And they talk about his crime and that becomes the central focal point of his time as attorney general, the crime and the impeachment. But no, you would rather just sit there and say, well, the Republicans are mean and they don’t do what I want them to do even though it’s pretty obvious they should do it. So I’m just not going to do anything. I’m not going to do anything. That’s, that’s not how this works. This is why people have a problem with the Democrats. This is why we have a problem with the Democrats and relentlessly have to call them out for crap like this, because this is crap. This is crap Nadler, you know better. Do your job because let’s put it this way tomorrow, your job’s on the line. That’s when your primary is. And if you don’t come out by the end of the day saying that you’re going to launch an impeachment inquiry into Bill Barr, then I encourage everybody in your district to vote tomorrow, but not for Jerry Nadler.