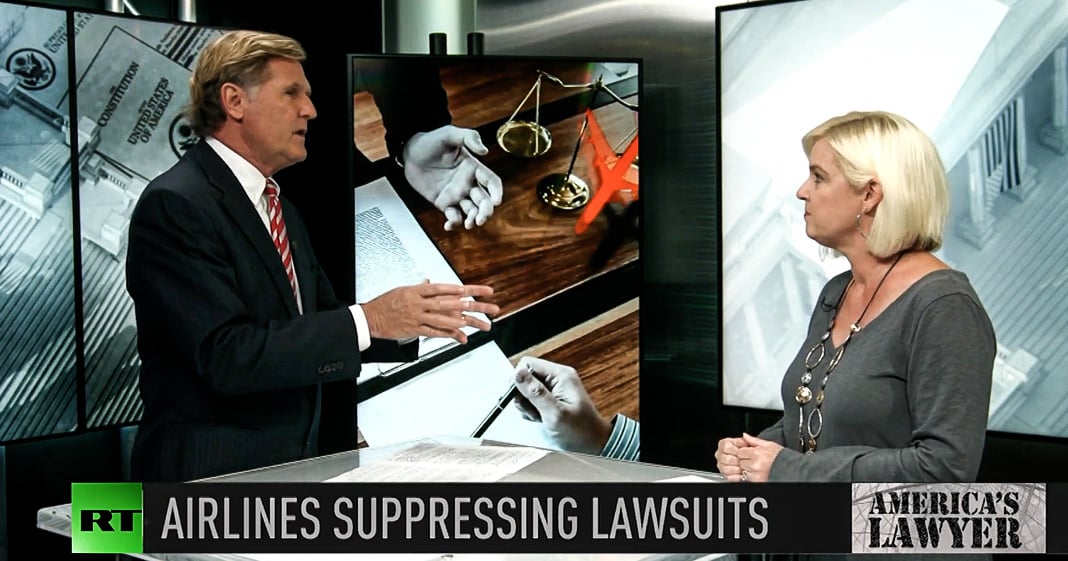 Via America’s Lawyer: Legal journalist Mollye Barrows joins Mike Papantonio to explain how airlines are quietly tweaking passenger agreements to make it more difficult or even impossible to sue them for any wrongdoing.

Mike Papantonio: Airlines around the world have taken a nosedive with the coronavirus pandemic, scrapping millions of travel plans. So what’s the story of the airlines tweaking their passenger agreements, making it more difficult to get paid when you pay an airline a thousand dollars, trying to get it back when they cancel your flight? Let’s talk about this.

Mollye Barrows: Yes. So basically these are a number of airlines that have added these additional clauses, even before COVID hit, where they, you know, you have to sign these carriage of, or contracts of carriage when you buy a ticket. It’s, it’s a standard industry document. If you want a ticket, before you can even swipe your credit card to buy that plane ticket, you basically have to agree to this. And there are clauses in there that say, if you’ve got a problem with this airline, we’re going to have to go to arbitration or you can file an individual lawsuit, but no class actions. And so essentially it’s one of those, what did you call a contract of adhesion.

Mollye Barrows: Or get a voucher

Mike Papantonio: Or get a voucher and what ends up happening is these, if you, if you’re owed $800 by the airline, right, you can’t sue them because the cost to sue them is so much. But the way you could go after them is in a class action where you had thousands of people that were treated the same way and it’s one lawsuit. And they say under the one lawsuit, this conduct by American airlines was wrong. It was a contract of adhesion that you made these people sign. They had to sign in order to travel. It’s a due process argument. It’s an equal protection argument. And frankly, the only way that anybody’s going to get their money back is through class actions.

Mollye Barrows: Well, it’s interesting because they talked about that, that class actions are actually one of the few avenues that an individual has in order to pursue the litigation for exactly what you’re talking about. And when you say something like that, I’m like, well, gosh, couldn’t you go to a small claims court.

Mike Papantonio: No you can’t.

Mollye Barrows: In the County or state, but that’s what they said. Most airlines, aren’t subject to state or individual state laws and or consumer laws that would be in place to naturally protect the consumer.

Mike Papantonio: You have to sue them in federal court. The, the, the, the chance look, here’s the only good news. There is a spectacular class action law firm handling a case on this. It’s called Berger Montague. We work with them all the time. They’re our pals. We do business with them. We’re partners in some lawsuits, they are the best class action law firm in America. They’re going after American airlines. They’re going after some of these other folks. That’s the only, that’s the only, only possibility of changing all this, isn’t it?

Mollye Barrows: Yes, it is. So you have American airlines, British airways, frontier airlines, spirit airlines also have the no class action clause and you have American airlines is one of the few that’s responded and said, oh no, we give people arbitration as an option in order to resolve complaints. And they can still bring an individual lawsuit, which if you don’t realize what that means, like you talked about the individual lawsuit is practically a non-option.

Mike Papantonio: They owe you $700, it cost 5,000, just to initiate the lawsuit. They know this, once they get the, the guy, the person that’s owed money in arbitration, the arbitrators are typically, typically controlled by the corporation.

Mollye Barrows: Right, just like Amazon has been under fire for.

Mike Papantonio: Yeah, exactly. There is no, there’s no arbitrator there that’s out looking for the consumer. The arbitrator gets their job because of their contacts with these various corporations. So this whole process of what American airlines is doing, what, what incense me about some of the articles that were written is they actually, with a straight face American airlines with a straight face, says we’re trying to help our pass. That’s what they say. That’s what, we’re trying to help our passengers. Isn’t that what?

Mollye Barrows: That’s exactly right though. Yeah. Again, even with the spin, oh, you know, you can still bring an individual lawsuit with a straight face, knowing that that’s going to get them nowhere. But it, do you feel like the whole industry is going to change? Because part of this, you know, you’ve got so many cancellations of flights. They owe people, billions of dollars that these class actions are facing.

Mollye Barrows: So it seems like this is almost a hail mary on the part of the airline industry.

Mike Papantonio: Contracts of adhesion are not favored by the court.

Mollye Barrows: So it’s not going to work out. We’ll follow up.

Mike Papantonio: Ah, we’ll see, we’ll see. It depends on what judge it appears in front of.