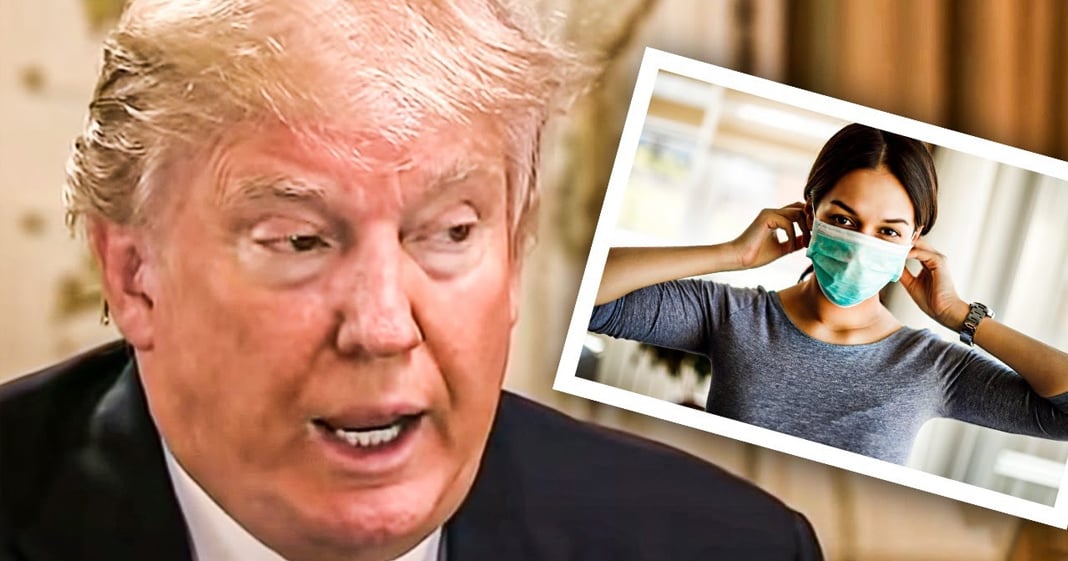 During an interview with The Wall Street Journal this week, Donald Trump said that he believes some people in this country were only wearing facemasks because they don’t like Trump. He truly believes that the masks are an act of political defiance against him, rather than an earnest attempt to protect themselves and others. The man is very good at making everything about him, even something as trivial as this. Ring of Fire’s Farron Cousins explains what’s happening.

In an interview with the wall street journal this week, Donald Trump says that he has finally figured out why Americans are wearing the face masks when they go out in public right now. And the reason is, is not the one you’d think, right? It’s not because they’re worried about germs. They don’t want to spread germs. They don’t want to catch, catch germs. It’s not because the CDC says, if you go outside, you should be wearing a mask. No, no, no, no. According to mr. Trump, the reason people are wearing those masks is because they don’t like Donald Trump. That is what he said in an interview with the wall street journal. They’re wearing the masks essentially as a sign of protest against Donald Trump because as we all know, Donald Trump doesn’t like to wear the masks. He doesn’t like the media to see him wearing a mask for whatever reason, he just doesn’t like it.

You take the mask off, you sanitize your hands or you wash your hands if you’re able to wash, if not, you sanitize as a temporary fix, and then you go about your day and you still avoid touching your face. Like the CDC says. None of this is a cure all. The CDC has not said that if you wear a mask, there’s no way you’ll catch the virus. That’s not a thing. You still can catch it. You still can spread it, but it helps reduce the spread if you wear a mask. Same thing with washing your hands and using hand sanitizer. If it’s, I think 70% alcohol or above, if it’s not 70% or more, unfortunately does not kill quite as many germs. Just a little, you know, FYI right there for everybody. But nonetheless, none of these say that if you do this, you’ll never get sick.

No, you’ll get sick. You could get sick. You might get sick, but you’re reducing your chances of it. And literally nobody’s out there washing their hands, just to stick it to Trump. You should be washing your hands anyway, because that’s what normal people do. You should be wearing a mask every time you walk out in public right now, because it shows respect for those who have to go out there every day. It shows respect for those essential workers. We have seen folks we’re seeing right now, what’s happening from people not wearing masks, who aren’t taking this seriously. Oklahoma has seen a more than 100% increase in new coronavirus cases compared to just two weeks ago. Yeah, that’s going to bode well for the moron rally in Tulsa. South Carolina, Arizona, Oregon, Florida, and Nevada have all seen increases of more than 100% compared with two weeks ago, Arkansas, Louisiana, Alabama, Texas, North Carolina and Utah have all had increases of 30 to 90%.

Folks, this is what happens when you’re not out there wearing the mask, when you’re not practicing social distancing and when you’re just pretending that the virus went away on its own. That’s not what happened. Wear your mask. Wash your hands. Those are two small things we can do to help slow the spread. Continue the social distancing. Don’t go out if you don’t need to. I know everybody’s dying to go sit in a dining room and have somebody wait on you. It’s not worth it. You know, if you have the money to eat out, use that money to order food from that local restaurant. So you can still support them. They can still have workers, but you’re not endangering yourself or anyone else by physically sitting in a restaurant. Is it that hard? Truly folks, is it that hard? Just do these simple things and then life can return to normal much faster. And if you want to prove Trump right, then just wear a mask to say, ha ha, I don’t like Trump. I don’t care why you wear the mask. I don’t care why you wash your hands or why you’re socially distancing, but for the love of God, please continue to do it so we can get through this faster.