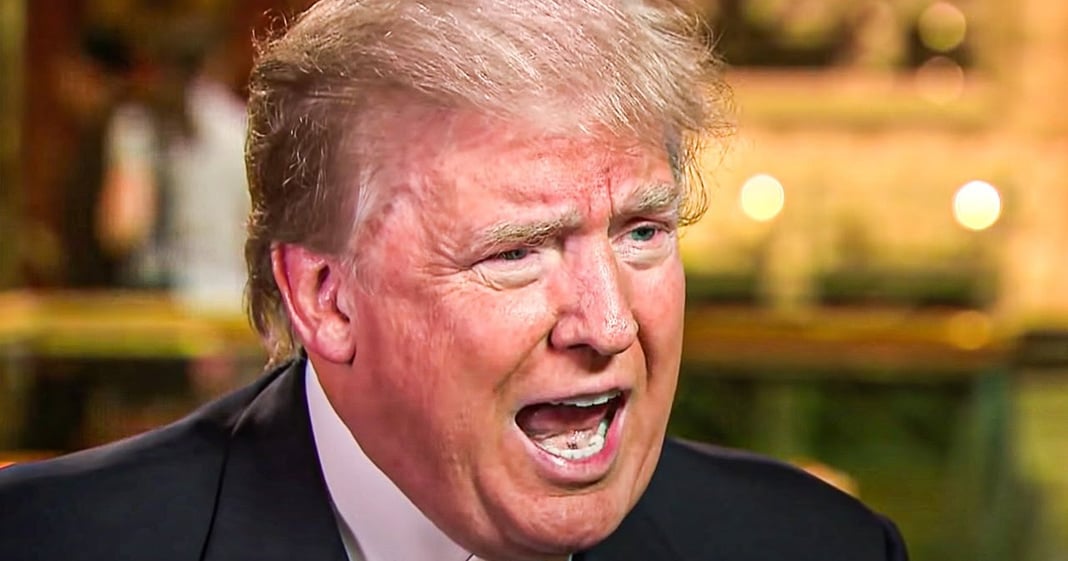 According to a report from The New York Times this week, Donald Trump reportedly snapped at his aides after they warned him that he was on a self-destructive path that will absolutely destroy his campaign. The President didn’t want to hear the HE was the one responsible for the bad things happening with his reelection, and he told the aides that he refuses to change who he is. Ring of Fire’s Farron Cousins discusses this.

According to a report this week from Maggie Haberman with the New York Times, recently aides, white house aides tried to talk to Donald Trump about some of his problems, specifically his problems with the polls. Because as we have seen polls across the board, everything from the national polls him versus Biden to even local polls in counties and districts that Trump won in 2016, he’s losing really badly and it is causing Republicans to freak out. So his aides, those closest to him, the folks that work with him every day recently kind of confronted him, I guess it was a little bit of a makeshift intervention and said, listen, man, you’re your own worst enemy. You know, the way you are, I’m sure they probably phrased it better, but you know, the way you are really is, is off putting for a lot of people. You know, your when, when the looting starts, starts, then the shooting starts. That, that wasn’t so good. Haberman said, they mentioned that specifically, to which Trump got angry, snapped at his aides and he said, I’m going to be me. I have got to be who I am, were the exact words, I believe. I’m going to be who I am and you’re not going to stop me.

I’m going to do what I do, because that is why people fell in love with me to begin with. And folks, those could be the words that end up being the end of the Trump administration, because Donald Trump refuses to admit that he could somehow be the problem. Now I have explained it thusly. It’s like Trump was the Macarena. You know, the song was nice, fun. Interesting when it first came out, this is only for the people who voted for Trump. This does not apply to everybody. But then they got sick of it pretty quick. That’s, that’s kind of how Trump is. You got to change your tune, man. You got to come up with something else, something different, something better because otherwise people are just going to change the station. They don’t want to hear you. They don’t want to see you. They don’t want to do all the little dance moves to the Trump, but that’s what you’re wanting them to do.

You know, it’s not gonna work and the aides tried to tell him that. Like, to their credit these people understood. They’re looking at what’s happening. They’re looking at the numbers and they’re telling him, hey, we kind of like working in the white house, but if you keep acting the way you do, saying the things you’re saying, making the situation worst, then we’re all going to lose our jobs. And I don’t think Trump understands this, but it’s actually been very, very, very hard for his former aides and staffers to find jobs once they leave the administration, because nobody wants to hire people from the Trump administration. So yeah, I see the concern of these aides. They need this job because it’s not going to be easy finding a new one. Not only because the way the economy is, but because of who their previous employer was, that doesn’t look so great on a resume. But Trump refuses and again, snaps at his staff.

And according to Haberman, Trump is acting trapped and defensive and his self destructive behavior has been so out of step for any incumbent in an election year, that many advisors wonder if he is truly interested in serving a second term. That’s the conclusion that the aide’s made after this confrontation that did not go very well. He was so reluctant or not reluctant, just angry at the thought that he could be the problem and that he needed to change, that they walked away thinking, I think he wants to lose. I don’t think he wants to play this game anymore and I think he is intentionally sabotaging his reelection. Now Haberman does not believe that. I do not believe that. And you should not believe that. Donald Trump wants nothing more than to be president. He wants to be president for the rest of his life and after that, he wants his son, Don jr, not Eric, to be president after that.

And sorry, Eric, he is not pushing you into politics at all, just Donnie jr. You may want to have a chat with him about that. But he doesn’t want to lose. He wants to win. He just doesn’t want to have to put in any effort. He wants to be able to just go out there and do one of his insane rallies and rattle off weird things and say horribly bigoted things and have people clap and, and sit at the podium and look around and do the sleepy Joe Biden, sleepy Joe Biden. Am I right? Am I right? Man, he doesn’t know where he is. And all he has to do is stupid stuff like that and it gets the rednecks to vote for him. But that’s not going to be enough this time and that’s kind of part of what his aides are telling him. Hey, it worked last time because it was new and weird, like the Macarena. Nobody wants to listen to that anymore, except for the weirdos who for some reason really are into that song.