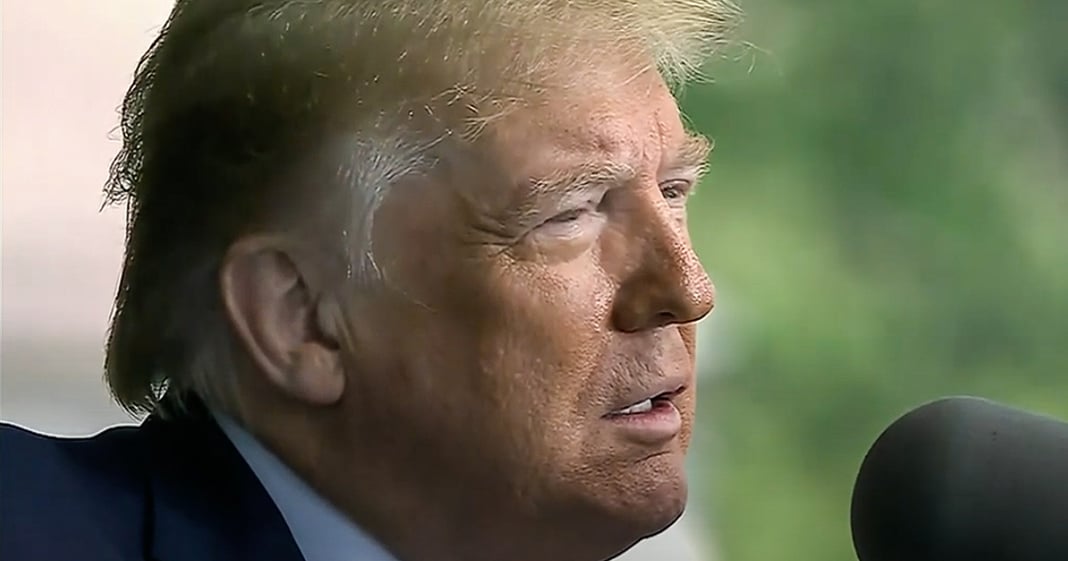 Donald Trump has gotten some REALLY bad poll numbers over the past few weeks, but this latest round of data is the worst he’s ever received. Not because it shows how much people dislike him – that’s not what was asked. This new data is about how people are doing under the Trump administration, and most say that they aren’t doing any better. When voters don’t see their lives improve, they could easily become more likely to jump ship, as Ring of Fire’s Farron Cousins explains.

Donald Trump has obviously gotten some really, really bad poll numbers over the past few weeks. But one that came out this past weekend was by far the most damning poll that has come out for Donald Trump. And this one has the most significant impact on whether or not this man has any chance of being reelected in November because this poll wasn’t asking, do you support him? Do you not support him? Do you like him? Do you not like him? Is he a little too rude on Twitter? No, no, no. This, this, this was more personal. This poll went back to the age old political question. Are you better off than you were four years ago? And most voters say, no, no, I’m not. A lot of them also said I’m not necessarily worse off, but fewer than one sixth of the voters polled in this poll said they were better off.

So less than one sixth of the population said, yeah, I’m doing better under Donald Trump and they all kind of fit into the same category, the folks that say they’re doing better. They’re all white for the most part and for the most part, they all make over $80,000 a year. So yeah, when you’re solidly middle class or upper middle class, because that’s 80,000 a year per person, not per household, yeah, I could imagine things are probably pretty good. Right? They’ve gotten better for you because you do qualify for the tax cuts. The rest of the country, nope. It’s either no different than it was four years ago or it’s actually worse. A third of respondents in this poll, 33% said actually things are worse for me than they were four years ago. And that’s the number we got to focus on. Oh, in addition to this number, which is 42% of those surveyed rated Trump’s overall handling of the economy negatively while 35% say he’s done a good job.

So he’s under water in approval on handling the economy and a third of voters say they’re worse off today than they were four years ago. That’s a disaster for the president. You know, forget all of the other things happening in the country right now that are absolutely going to affect his poll numbers. Just based on this, this number alone, one third of people saying, no, I’m not better off than I was four years ago. According to the old political, conventional wisdom, that number is game over. You don’t rebound from something like that. A third of the country saying they’re worse off under you. That’s not going to cut it. Especially when you consider the fact that only half of us in this country vote and a third of them say, you’ve pissed them off and you’ve screwed them financially. Yeah, those people are going to vote because they’re very, very unhappy with what you personally have done to them.

So that’s why I say that this particular poll right here has more impact on the 2020 election than the other polls. Yeah, Biden’s kicking Trump’s butt left and right state by state swing state to swing state. But none of that is going to have as big of an impact on this election than the poll I just told you, because people vote for their own self interest. Good or bad, they vote for their own self interest. This is showing that people aren’t doing better. Again, a lot of them say they’re also not doing worse, but if the opportunity to do better emerges, say with a different president, they’re far more likely to take it. And that’s another reason this is show bad for Trump. If Biden is offering nothing more than the same that Trump is offering, then that actually would give the edge to Trump. So if Biden can just offer a tiny sliver of something better, this election’s in the bag. The question is, can he do that? That’s like the bare minimum of asking and it’s still unclear whether or not Biden is going to be able to offer something, anything better than the horribleness that we’re getting from Trump right now.