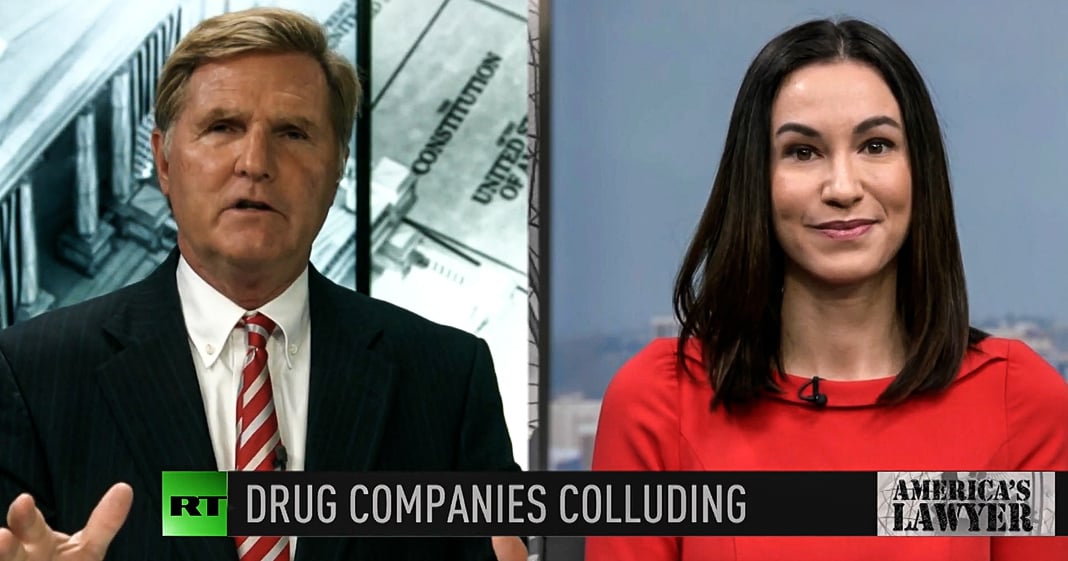 Via America’s Lawyer: Mike Papantonio is joined by RT Correspondent Brigida Santos to put drug manufacturers in the spotlight, as over two dozen are accused of colluding to send prescription drug prices skyrocketing.

Mike Papantonio: A sweeping lawsuit accuses 26 drug manufacturers of colluding in a price fixing scheme to drive up the cost of generic prescriptions. RT’s Brigida Santos joins me now to talk about this story. Brigida, which companies are named in the lawsuit and how did they defraud the public?

Brigida Santos: Well, there are 26 companies named. The defendants include notable drug makers, Mylan, Pfizer, Sun pharmaceutical industries, and Novartis’ Sandoz unit and at least 10 drug company executives who are responsible for sales, marketing, pricing and operations. The 450 page complaint outlines how the companies and executives artificially inflated the prices of 80 generic drugs through phone calls, text messages, emails, corporate conventions and even cozy dinner parties. The executives reportedly in constant communication, colluding to fix prices and restrain competition. Their alleged activities are of course illegal under federal and state antitrust and consumer protection laws. So it’s great to see this lawsuit coming forward.

Mike Papantonio: Yeah, but Brigida, in America if you’re dressed up in a suit and you’ve got a tie on and you carry a briefcase and you’ve got a Bentley outside, your laws are different from everybody else. See none of these thugs will see the inside of a prison, even though the law is very clear it’s felony, felony, felony. We’re not talking about misdemeanor law here. We’re talking about serious felonies and the department of justice under Clinton was unwilling to do anything about it. Under Bush was willing unwilling to do it. Under Obama, not, not going to send anybody to prison. Under Trump, nobody’s going to go to prison. So, so this has been going on for so long because we, they, they know they never have to go to prison. All they do is pay a fine and it’s get out of jail free. What drugs did the companies inflate? What, what prices did they inflate?

Brigida Santos: Well, this complaint really focuses on generic topical skin products. So dermatology products, including the local anesthetic, lidocaine ointment, anti-fungal cream, clotrimazol and latanoprost drops for treating glaucoma and other eye diseases. These are drugs that are commonly prescribed. So many people rely on them. And this scheme unfortunately took place allegedly between 2009 and 2016, which denied millions of consumers, access to affordable generic alternatives to those expensive brand name counterparts. And the fact that the prices of these generic topical drugs had increased exponentially over that timeframe is really what prompted this investigation. Prices were skyrocketing without explanation, in some cases doubling, tripling, or even increasing by over 1000%.

Mike Papantonio: Well, we know this, we know that you start, you said 2009. We know that Eric Holder not only did not prosecute them, he gave them their way out every they were, every time they were cornered, Eric Holder let them up. Nobody was even investigated, much less prosecuted. Then comes in Loretta Lynch, right after Eric Holder. You see both of those folks, just like we saw with the Bush administration, just like we saw with the Clinton administration, just like we see with the Trump administration. They all are just joined at the hip with industry, all kinds of industry, not just drug industry, all the industry. The cost of generic drugs aren’t just high in dermatology. They’re, they’re high across the board as in the healthcare in general. What kind of bills are COVID-19 patients seeing these days?

Brigida Santos: It’s been absolutely crazy. Now, people who have been treated for COVID-19 have reported receiving astronomical medical bills. One woman in New York accidentally received a bill that should have actually gone directly to her insurance company, but it illuminated how high healthcare prices are. Now her bill totaled over $400,000. It was reduced to $75,000 as a financial assistance benefit, but still she can’t afford to pay that much. When she actually looked at the bill to find out what she was charged for, it was really vague. It did include one line for prescriptions for over $42,000, actually it was titled pharmacy. Now there was no itemized breakdown letting her know what the drugs had cost or even what drugs the doctors gave her. And then another COVID-19 patient from Seattle said that his coronavirus virus medical bills totaled over $1.1 million. Now he’s not going to have to pay most of that due to special financial aid rules that apply only to COVID-19 due to those congressional bills that were just passed. But people suffering from other diseases like cancer, they’re often on the hook for similarly outrageous bills.

Mike Papantonio: And the point is this, the point is we, these, these folks, these CEOs absolutely know that they are criminally breaking the law. But they absolutely know that in Washington DC they’re going to get away with it. Somebody’s going to have to pay a fine, but nobody goes to prison. So the next CEO comes in and does exactly the same thing. Without a perp walk this is never going to change. And I haven’t seen a president that has had the damn backbone to do what he should have done and appoint an attorney general who’s serious about throwing white collar criminals in prison, and that’s what we have here and it’s only going to get worse. Brigida, thank you for joining me. Okay.