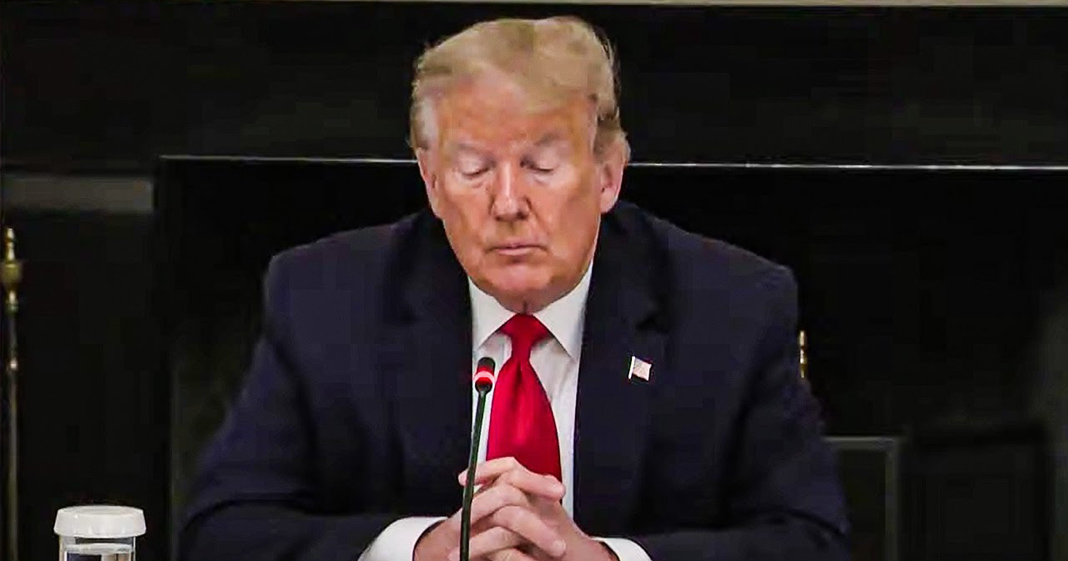 As a gathering with reporters was wrapping up on Thursday, a dejected Donald Trump was asked by a reporter why he always hires people who are “liars” and “wackos.” The reporter was using Trump’s own adjectives to describe the people that he has hired over the years, only to later turn on them and insult them relentlessly. She had a great point, and it would be nice to see the President answer the question. Ring of Fire’s Farron Cousins discusses this.

Donald Trump loves to say that the people who do not work for him anymore, they’re losers, they’re liars, they’re wackos. There’s something wrong with them, whatever it is. If you don’t work for him anymore, he is finally able to tell the world that you’re an absolute piece of crap who doesn’t deserve to have a job anywhere in the country. Which actually begs the question, why do you keep hiring these people that you think so little of? These people who, as you’ve said yourself have been absolute failures, but you’re the one who hired them. Well, luckily, yesterday, Donald Trump was asked exactly that question by CBS news reporter, Paula Reed, and this was the answer that Ms. Reed Got from Donald Trump, when she asked this question, here it is.

Trump’s response right there. The, just the dead silent kind of staring off into the abyss. That is exactly what we would expect, because he has no answer for this and that’s the funniest part. We know he has no answer for it, but I cannot tell you how awesome it is that CBS news reporter, Paula Reed, had the courage to straight up ask that question to his face. Like, as they’re already kind of being herded out of the room, she just yells it out twice. Like, why are you doing this? Why are you doing this? That is absolutely what we need more of in the white house press pool. She is amazing. I loved every second of that and I will be watching that clip over and over again anytime I feel a little depressed because that is what the white house press pool should be doing every single day. We need more Paula Reeds out there to have courage, to have backbone and to straight up ask these very obvious questions to the president.

You’re sitting there right now, Donald, telling us what a horrible human being John Bolton is. That he’s lying and that he’s always been a liar. That he is a loser. That he’s a wacko, but you hired him. What does that say about you? You know, the guy that hires the lying loser-ish wacko, um, I’d, I’d have to imagine this probably doesn’t say a lot of good stuff about you. Right? You hired the horrible person. Wouldn’t that make you an even worse person? And you’ve said the same thing about other people, Rex Tillerson, Jim Mattis, John Kelly, Jeff Sessions, other members of your administration that have come and gone. You always have some really, really horrible words for them, Omorosa off and on over the years, ever since the Apprentice. Like, ah, she’s the worst human being on the planet. Hey, you want to come work at my new company?

Sure. I’ll come back, and then it’s the same thing over and over. You have a problem, Donald, you have a problem. And the problem is not coming from the people you hire, it’s because you hire problematic people because that’s your problem. Does that make any sense? But that’s what we’re dealing with. The guy doesn’t know how to judge character. The guy doesn’t know how to pick winners. He picks people who are the most like him and when he sees his own traits reflected back in these individuals, he loses his mind because he realizes at least internally, it’s like looking into a mirror and by God, Trump doesn’t want to ever have to look into a mirror and see that horribly disfigured reflection, personality reflection, staring back at him. But that is what he sees in all of these people that he fires and then later goes on to label as liars and losers and wackos.