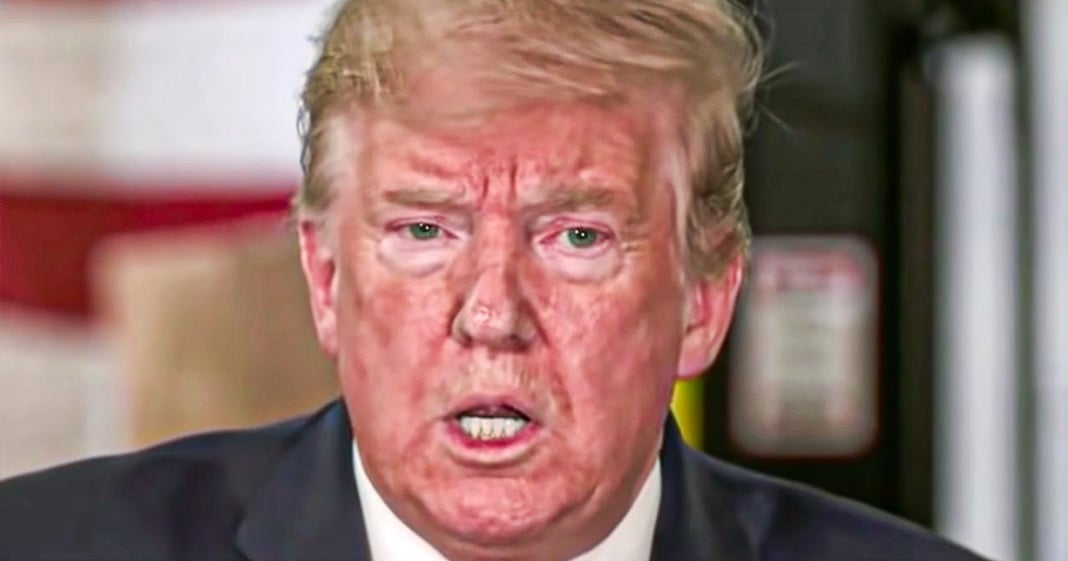 Donald Trump caused an outrage on Twitter on Thursday after he compared his defeats at the U.S. Supreme Court to being hit with a shotgun blast to the face. He is referring to his defeat on the DACA case, but it is unclear why he chose to use such a gruesome metaphor, and the metaphor sparked outrage from the parents who had lost their children in horrific tragedies in schools all over the country. Ring of Fire’s Farron Cousins discusses this.

Donald Trump isn’t happy that he’s had a couple of setbacks this week at the US Supreme Court. He’s actually had a couple of victories. One of those actually handed to Republicans and corporations by Ruth Bader Ginsburg, which was a bit of a shock. That one was a ruling on oil pipelines. But nevertheless, on some of the really, really big issues, you know, transgender protections, as well as protections for DACA recipients, the dreamers, Donald Trump got absolutely demolished and he made sure everybody knew that he got demolished because he tweeted out yesterday morning. I don’t think the Supreme Court likes me very much and he was being humorous about it. But I guess he thought about it a little too much ended up hurting his own feelings. And later in the day sent out this tweet. He said these horrible and politically charged decisions coming out of the Supreme Court are shotgun blasts into the face of people that are proud to call themselves Republicans or conservatives. We need more justices or we lose our second amendment and everything else. Vote Trump 2020.

So many crazy psychotic things that he said in that tweet. So let’s, slowly break it down for everybody. Obviously the first one, shotgun blast into the face of conservatives. This particular part triggered a very strong reaction from the parents of children who have died in mass shootings. They talked about the fact that their children actually did suffer gunshot blast to the face because of right-wingers and their second amendment fear-mongering and refusal to get weapons of war off the streets. So that was, you know, the first misstep, I guess you’d call it that Trump made with this tweet, because a lot of the tweets in response, the ones from these parents, thousands upon thousands of, of retweets and likes and all of that, they, they really blew up on social media and some of the stories were absolutely horrific what the, what these parents described happening to their children. And that’s why it resonated with a lot of people because of the graphic detail that these parents provided, because that’s what they live with now every day, those images.

And Trump just uses it because he’s not happy that he can’t deport people and he thinks that is the equivalent of getting shot in the face. The man has mental problems. And as I am fond of saying, so does anybody that supports him. You have mental problems. If you look at this crap and you say that that’s okay, that this is what you like, there’s something wrong with you. There is something certifiable, classifiable and diagnosis-ably wrong with you if you think that this is okay. Moving on, he talks about again, you know, Republicans and conservatives, it’s the shot to their face, the Supreme Court isn’t there to be partisan. It’s not there to say, well, we got to protect Republicans. We got, they’ve got to look at it and say like, hey, is this legal? Or is this not? But Republicans have done a very good job of packing the court with partisan hacks. But even that sometimes as we’ve seen this week, isn’t enough to save you. So Trump, as the tweet continues, wants more justices.

He wants to put more people on the bench so he can have more conservatives on the bench so that we can not have any chance of the more liberal judges, ruining the conservative plan to destroy America. He then goes on to the fear monger, fear mongering part, excuse me, with the second amendment. They’re going to take it away. They’re going to take it away because by God they’ve been saying that for decades, they’re gonna take it away. And never at any point have Democrats legitimately tried to take away the second amendment. That is completely false. I’d love it if they did. I’m not a supporter of the second amendment in any way. It is there. There’s not much I can do about that and yes, I will defend second amendment rights. That doesn’t mean I like that amendment and if it were to be abolished, I would be happy.

But if it’s there, it’s the law. It is what it is. So not a whole hell of a lot I can do about that personally. But Trump is using it to scare his already terrified base. His already terrified and shrinking base, I should add, because as the latest poll numbers show Donald Trump really doesn’t have all that much support anywhere in the United States right now. And that might also be what caused him to freak out and send out this disgusting tweet. But regardless of the motivation behind it, there is absolutely no excuse for this kind of behavior from the president of the United States.