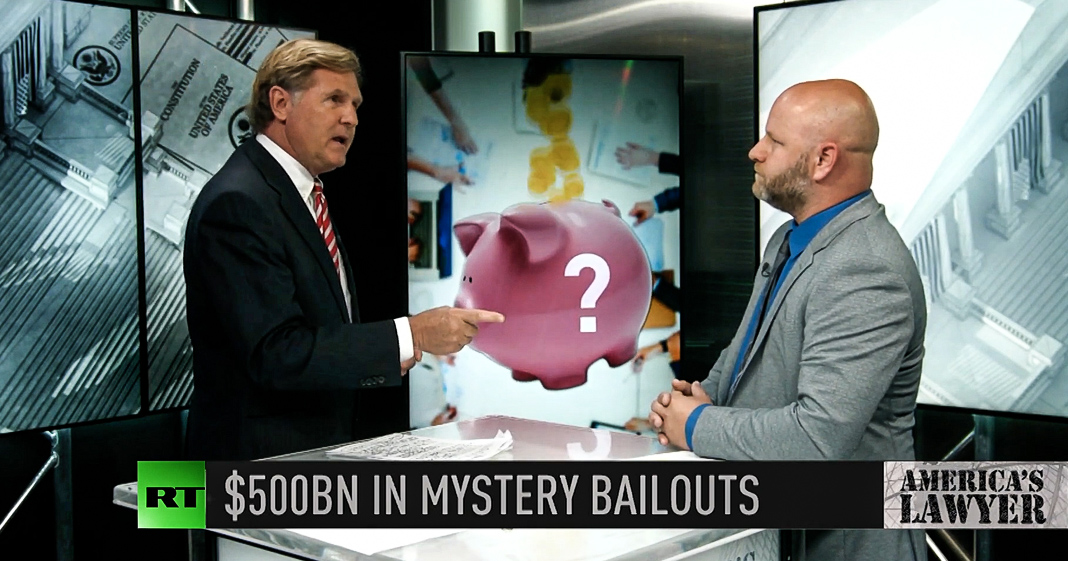 Via America’s Lawyer: Why won’t the Trump administration fess up about exactly where $500 billion of COVID bailout funds have gone? Mike Papantonio & Farron Cousins discuss.

Mike Papantonio: The millionaire in charge of the treasury department has decided to keep the names of the companies getting coronavirus bailout money completely secret. Okay. SBA, SBA, that’s where the money’s coming through, has always, always made that information available, but not under the little munchkin, right?

Farron Cousins: Steven Mnuchin. You know, he’s going to do what Steve Mnuchin does, and that is keep everything secret, give money to his powerful friends, you know, powerful financial interests, and then hide it from the public and that is exactly what’s happening here. And the reason he’s doing it now is because we know from the first round of stimulus, that 245, at least publicly traded companies, got their hands on some of that small business loan money. And Steve Mnuchin says, wow, I took a lot of heat for that because yeah, I shouldn’t have, but I did. So this time, I’m just not going to tell you. You have no way of knowing until a new administration comes along and releases it, where this money goes. But this, this to me is appalling. Not just because he’s hiding it because we know what’s going to happen. We know where it’s gonna go.

Mike Papantonio: Well, okay. We know there’s fraud. We know there’s hustle. We know there’s all types of iteration of fraud. We know that. 4.5 million companies split up $500 billion and the SBA has always said, you want that information who got the money, we’re going to give it to you. But the little munchkin comes on and says, no, we can’t do it. Why? Because he is useless in his job in that department. And here’s the problem, here’s the real problem. It was a failure. It was a total utter failure and his name goes on the failure. His picture goes on the failure and if this information ever comes out, we can then start talking about what a huge failure the guy is.

Farron Cousins: Right. I mean, Steven Mnuchin is nothing short of a bond villain. I mean that, that’s what he is. That’s what he’s doing in this administration. But regardless, everything right now is infuriating with the response from the federal government with coronavirus. American citizens were given what, 1200 bucks, two months ago and they haven’t gotten another dime. Even though it’s not safe to go back to work. We’re seeing the numbers spike everywhere. There is no relief for working class people in this country and Mnuchin is trying to hide this program so that the wealthy corporations.

Farron Cousins: Can get more money.

Mike Papantonio: We already know it’s happening. We already know that the CEOs that, you know, have involved in hucksterism to get the money, we know there’s been con jobs for them to get the money. We know that there’s hustlers out there that in 13 days, now think about this, in 13 days they were already out of money because the first people in line where the affluent. The first people in line with these corporations that had their lawyers collect the money up and mom and pop that’s got a store on main street that really needs the money, they ran out of money. We had it happen right around here in Pensacola. We are getting calls like crazy. What do you mean there’s no money? This is a restaurant, three generations in the family. It, but it’s not a CEO of a major corporation.

Farron Cousins: And they would create little shell companies and little new, you know, oh, I have five employees with this business that was started three days ago. I need $10 million. That’s how the scam worked and that’s what Mnuchin is trying to hide.