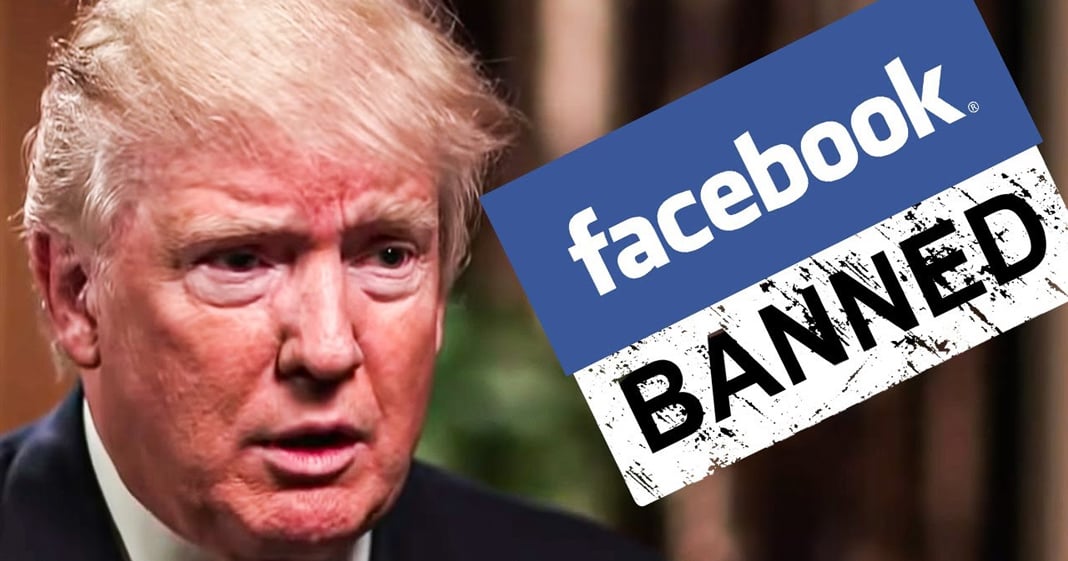 Facebook was content to let Donald Trump get away with anything, and much like a child that continues to push the boundaries further and further when they aren’t punished, Trump went off the deep end in his latest ad. The President and his campaign used Nazi imagery to attack Antifa and other protesters, and that was a step too far, even for the Trump-loving Mark Zuckerberg, and they were forced to pull his ad. Ring of Fire’s Farron Cousins explains what happened.

Mark Zuckerberg has made it clear over the last few months and really over the last couple of years, he does not want Facebook getting political whatsoever. He does not want to interfere with it. He says, let’s just let whatever happens happens. And, he came under fire recently for refusing to mark Donald Trump’s speech as hate speech or speech that incites violence, when he was going after the protesters, when he was saying the horrible things about Antifa, which was inspiring attacks against the protesters. But finally this week, Facebook had enough, Donald Trump and his reelection campaign finally crossed the line. The post that made them, Facebook finally take action and take the post down, was from the Trump make America great again committee, a post by Donald J. Trump, the official one, and it said, quote, dangerous mobs of far left groups are running through our streets and causing absolute mayhem.

They are destroying our cities and rioting. It’s absolute madness. It’s important that every American comes together at a time like this, to send a United message that we will not stand for their radical actions any longer. We’re calling on you to make a public statement and add your name to stand with president Trump against Antifa. Please add your name immediately to stand with your president and his decision to declare Antifa a terrorist organization. And then it had a little upside down triangle. Not sure why, right? The triangle was just kinda there. Well it turns out that that triangle was actually a Nazi symbol and this was, you know, the official Trump group. Put this out there with that statement that I just read you, the upside down triangle, and then Facebook said, yeah, we removed these posts and ads for violating our policy against organized hate. Our policy prohibits using a banned hate group symbol to identify political prisoners without the context that condemns or discusses the symbol.

Because according to the Anti-Defamation league, league, this triangle that the Trump people used in this ad was in fact used by the Nazis to identify political prisoners in Nazi Germany. And so it makes a little sense why the Trump people would put this on there because that’s what they want Antifa to be, their political prisoners. They’re just not their prisoners yet. They have to arrest them first and they need your help to do it. So support him in calling them a terrorist organization. So then the Trump organization or Trump team, excuse me, decides to fire back and say, no, no, no, no, no, no, this is totally, this is because this is Antifa’s, um, logo. You know, the organized group of Antifa, this is their thing. Right? The upside down triangle, we’ve all seen the thing. You know, the thing as Joe Biden would say. So they sent out a tweet, here’s the tweet.

I have to show you this because you have to see the logo here. And it says, obviously this is an emoji. It’s also a symbol widely used by Antifa. It was used in an ad about Antifa, it is not in the ADL’s hate symbols database. It actually is in the database. And that little logo that you see there of the upside down triangle with the word Antifa over it, they made that. Trump’s campaign made that because really cool people on social media then took that image and they said, okay, well, if this is what Antifa uses, obviously we’ll find it somewhere. So they did a reverse image search through Google and that image, the upside down triangle with the Antifa logo across, it has literally never been used ever on the internet, not one single time because Trump’s team made it up, they made it up so they didn’t look like they were using a Nazi symbol, but they were.

They knew what it meant and I think that’s why they chose it. And then they tried to create a fake talking point with a fake logo for, let’s be honest, a fake organization. Antifa is not an organized thing. It’s a label an individual slaps upon themselves when they want to go out and do these things that are happening. That’s what Antifa is. They don’t have meetings. They don’t have their own websites or newsletters. You know, like the right wing hate groups do. Those are organized. Those have actual members. Yet, none of them are classified as terrorist organizations. Very odd, isn’t it? Well not when you consider who’s running the country right now. But the bottom line is this Facebook was right to take down the ad. Facebook needs to get more aggressive with this. The Trump campaign is lying about this, just being a simple little emoji and it being Antifa’s logo. Antifa has no logo and they made one up for them so that they wouldn’t seem quite as racist as they really are.