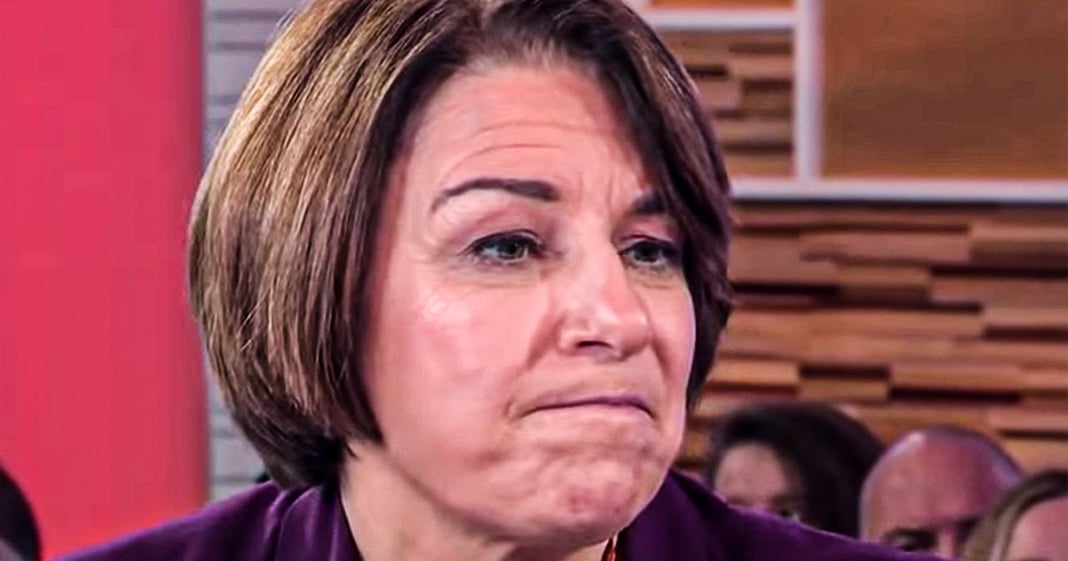 Democratic Senator Amy Klobuchar has officially withdrawn her name from consideration to be Joe Biden’s vice presidential candidate, and not a moment too soon. Not only had Klobuchar’s name fallen off the shortlist of people the campaign was considering, but her reputation has also been forever tarnished as the prosecutor who refused to do anything about George Floyd’s murderer. Ring of Fire’s Farron Cousins discusses this.

Former democratic presidential candidate Amy Klobuchar announced on MSNBC’s Lawrence O’Donnell program yesterday evening, that she was officially dropping out of consideration for the vice-presidential slot on the democratic ticket. This came as a surprise to absolutely nobody in this country. Most people had actually already forgotten that Klobuchar was ever once even in consideration and the latest news to come out of the campaign was that there were six people who were essentially finalists and Klobuchar’s name was not on the list. So nobody thought Klobuchar even had a shot at this thing and for good reason. I mean, as we all know, Klobuchar was in fact, one of the local prosecutors who refused to go after Derek Chauvin, the officer who was allowed to stay on the force and then murdered George Floyd. Klobuchar could have effectively prevented some of what we’re seeing in the country today.

Now I’m not saying all the problems with racial inequality come from Amy Klobuchar, that would be an insane statement to make, but Klobuchar helped perpetuate it. And she did, in fact, allow the man who was the catalyst for what we’re seeing today, go out there and continue serving as a police officer. So no Klobuchar absolutely would have tanked the democratic ticket this year. So she goes on Lawrence O’Donnell and makes it sound like it was her decision. She’s, God, she’s so pathetic, like absolutely horrible human being she is. I cannot stand her. Anyway, she says, after what I’ve seen in my state and what I’ve seen across the country, this is a historic moment and America must seize on this moment. I truly believe, as I told the vice president last night, that I believe that this is a moment to put a woman of color on that ticket.

And you told him that on Wednesday and Wednesday marked, by the way, the 20th day of the protests. So it took you 20 days to soak in what was happening around the country and you finally had that aha moment of, oh, the vice president should be a woman of color, not a woman of horrible history like me. That’s, is that what happened, Senator Klobuchar? Because I’m a little confused here, because 20 days ago, even as this stuff was going on, you were more than happy to be vetted to be in this position. But then, then when your horrible history came out, that’s when you suddenly like ah, okay, oops, I can’t do this. But you did tell Lawrence O’Donnell the following you said, when he asked about your record, if it would impend, impede how you function as vice-president you said, I think I could have functioned fine.

There are, there’s a lot of untruths out there about my record and now is not the time to debate them. No, I think actually now is the time to debate them. Now’s the best time ever to debate them, Amy. If you legit say that I there’s mischaracterized, characterizations about this, this isn’t exactly true, now would be the perfect time to come out and say that. Now that would be the perfect time to explain yourself, to clear the air, so that we don’t go on continuing to hope that every political race you run in the future is an absolute failure because that’s where we’re at right now. We just want to see you fail because of how horrible you’ve been. Now, if that wish of failure is based on something that’s not true. Please tell us, you know, I hate to wish bad things on somebody for the wrong reason, Amy, Senator Klobuchar.

So how about you clear that up for us and we’ll go from there. But until then, nobody cares that you’re taking your name out of consideration other than the fact that they’re happy about it. We didn’t want you as president. We damn sure don’t want you as vice president. We would love nothing more than to see you go away because you right now represent everything that’s wrong with the system. From the corporate ties of the democratic party to perpetuating the racial inequality that has helped spark the protests across the country. Amy Klobuchar represents every single bit of it and has no place on a presidential ticket now or ever.