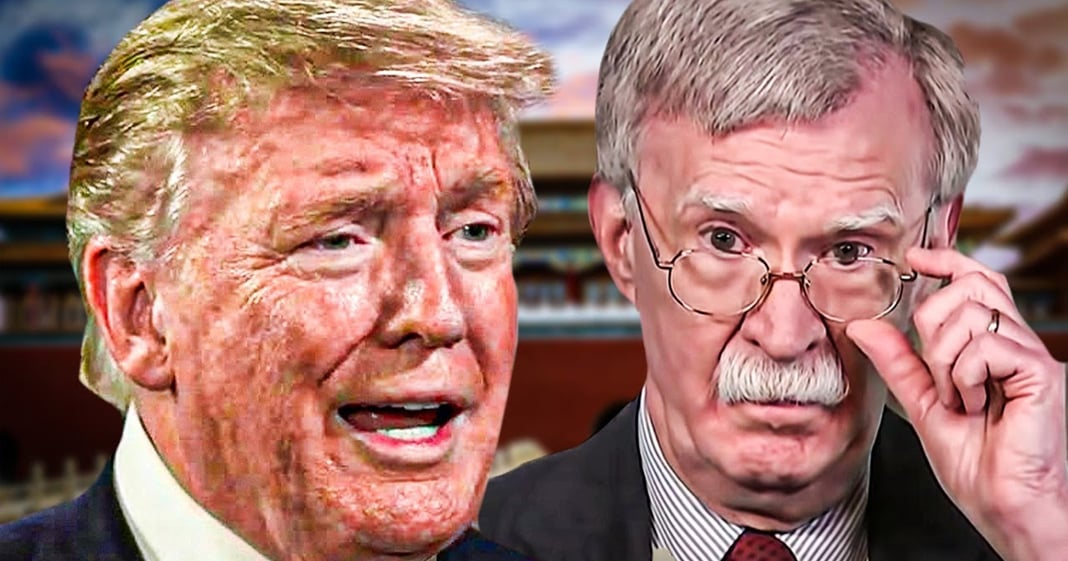 According to John Bolton’s new book, Donald Trump pleaded with President Xi of China to buy more agricultural products from the midwest so that he could win those states in this year’s election. While this might not be as nefarious as other plots the President has hatched with foreign powers, it does show that the President knows he messed up big time, and that he’s at the mercy of the very people he screwed over. Ring of Fire’s Farron Cousins discusses this claim, as well as several other damning new claims from Bolton’s book.

Donald Trump’s former national security advisor John Bolton’s book is due out in just a few days now and of course, Donald Trump is freaking out. He said on Twitter, first thing this morning, he said, Bolton’s book, which is getting terrible reviews is a compilation of lies and made up stories, all intended to make me look bad. Many of the ridiculous statements he attributes to me were never made. Pure fiction. Just trying to get, even for firing him like the sick puppy he is. First and foremost, his little claim there that the book is getting terrible reviews, actually it’s not. So I don’t know where that came from. I know you try to make yourself feel better, but you’re lying when you say it’s getting terrible reviews. It’s not getting a whole heck of a lot of reviews right now, but the few that have come in are actually pretty positive.

So why is Trump freaking out? Well, because like every other book that’s come out about his administration, it’s got some pretty damning material and one of the more damning claims that has been revealed over the past 24 hours is that Donald Trump in fact, asked China to help interfere in a way in the 2020 presidential election. Now this is not quite the same level as the Ukraine scandal, where he actually wanted them to interfere and dig up dirt. This was more of a subtle, not necessarily illegal move by the president because according to the book, Donald Trump, as president Xi of China to buy more agricultural products from the Midwest here in the United States, buy them for China so that these sales would go up, you know, farmers would be doing better. The Midwest would be doing better. It would help the economy out there.

And then they would be more likely to vote for Trump in 2020. Again, not exactly illegal, really. Just saying, hey, buy more stuff so I can win an election, but it does show you where this man’s priority lies and that he knows his policies screw these people over. He just doesn’t care until of course it’s time for them to go and vote. So folks in the Midwest, please do remember Trump knew he was screwing you over with the trade war and then he tried to use you as pawns for China. He tried to play you to get China to buy more stuff so you would vote for him because you would think that he did a good thing for you when he was the one that hurt you in the first place. It’s like, if I’m in the process of just punching you in the face, and then I finally say, all right, I’m done punching you in the face.

You don’t look at me like, oh wow, that’s the guy that stopped me from getting punched in the face. No, that’s not how it works, but that’s how Trump thinks it works with the voters. Like he’s just sitting up there punching you and punching you and then when he finally stops you don’t thank for stopping and saying, wow, I thought nobody would stop that. But you did. Thank you, sir. No, he’s a horrible human being that screwed you all over and I hope you’re smart enough to understand that. But even though that is one of the most damning claims that has come out recently, it’s also been a little misconstrued, because there’s lots of headlines saying that Donald Trump asked China to, you know, directly interfere in the election. And again, what he asked them to do is not technically illegal, which is why I’m a little confused as to why that part of the story that has emerged that has been released is what people are focusing so hard on.

Because according to Bolton, he also asked Turkey to interfere in the United States election. He asked other countries to help dig up dirt on his political rivals. That’s a big deal. Here’s a list from Alternet, actually, they did a good job of putting together the, the worst things mentioned in the book. His infamous Ukraine, quid pro quo was in fact explicit, meaning there was intent. His intent was to influence the US election. Therefore it would be considered a crime. He also, by the way, Bolton says the Democrats really screwed the pooch by narrowing the focus of their impeachment, just on Ukraine. Well Bolton, you also kind of screwed the pooch by not testifying under oath. Okay? You’re not a hero here. You’re still a horrible piece of crap. You could have done something about this. It still wouldn’t have redeemed you for all of your past sins from previous administrations, but you could have done something.

You’re, you’re, you’re a horrible human being and always will be. Other claims made is Trump reportedly did not know Britain is a nuclear power. Reportedly asked if Finland is part of Russia. All right. So those claims like, okay, wow, the president’s dumb. We know that, those aren’t really shocking. Secretary of state Mike Pompeo, reportedly dismissed Trump’s overtures to North Korea as useless. Bolton says he reported cases of Trump’s potential abuses of power to attorney general William Barr. Now that’s a big one. That kind of seems to me like the kind of thing Bolton should have testified to under oath and as we always see carries around those yellow notebooks, because he keeps notes of everything and that’s why staffers or Trump are so terrified of this book coming out next week, but it would seem like he should have, you know, told investigators about that when it was time to do that.

And here to me is absolutely the most disgusting thing in the book. Bolton’s book indicates that Trump encouraged China to pursue its policy of putting a Muslim minority population in concentration camps. That to me kind of seems like the thing the media should be paying a little bit more attention to and given Trump’s record his policy record here in the United States, that seems entirely plausible and in line with what Trump has tried to do. His Muslim ban, we know that he likes to single out Muslims. We know that he likes to put people in cages, certain groups of people, ethnic groups. And yes, I know by the way, those cages did not start under Trump, but he damn sure expanded them. These are some very serious claims. Bolton had a duty to tell the public these things under oath during the impeachment hearings, but instead he chose to withhold it. Now he’s criticizing Democrats and Republicans for a profit. That’s what this is about. I’m sure most of these claims are true. Trump wouldn’t be freaking out if they weren’t, he would be suing Bolton if they were all lies. But sans lawsuit, we have to assume everything Bolton is saying is in fact reality.