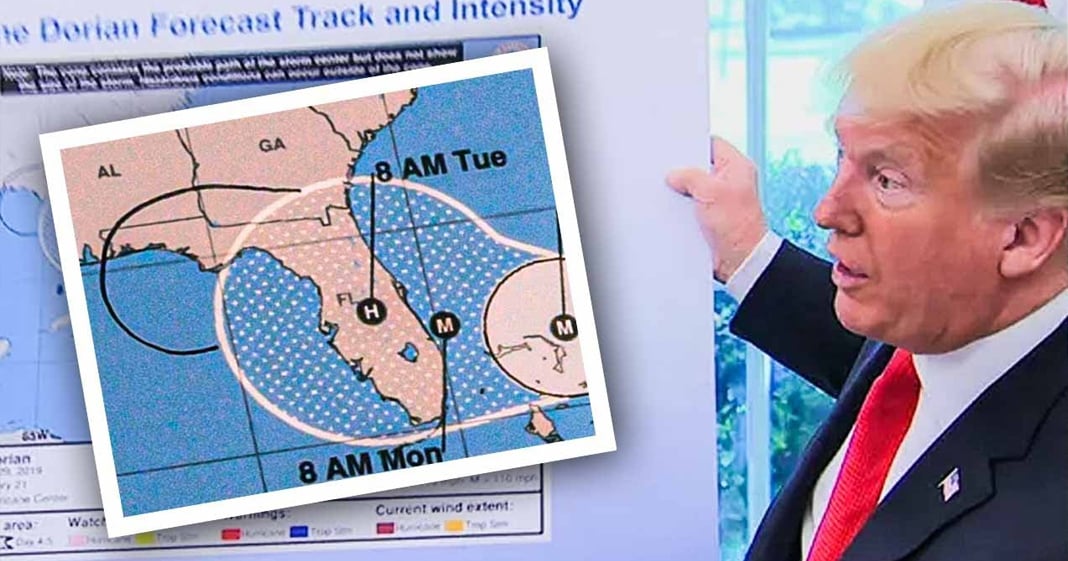 A new report claims that Donald Trump managed to corrupt scientists at the National Oceanic and Atmospheric Association (NOAA) last year during Hurricane Dorian when he claimed that the storm could hit Alabama and filled in a NOAA forecast model with Sharpie marker. The agency refused to allow their people to correct the President publicly, and an inspector’s report says that this had a chilling effect on both science and the organization as a whole. Ring of Fire’s Farron Cousins discusses this.

There’s been lots of different scandals throughout Donald Trump’s entire administration, but none of them more stupid than Sharpiegate. Sharpiegate, as I’m sure most people remember was last year you had hurricane Dorian headed towards the United States and Donald Trump erroneously said, hey, careful, it could hit Alabama too, but it wasn’t going anywhere near Alabama. So rather than just, letting it go or saying, oops. No, sorry, I didn’t mean Alabama. I meant blah, blah, blah. Or just not saying anything at all. The president decided to double down on the claims, took a map from the national oceanic and atmospheric administration NOAA drew in with a Sharpie an addition to the cone of uncertainty, which is what it’s called. And he added his own little part to include Alabama to be like, ah, see, I told ya, Alabama, and everybody knew it was fake.

Everybody knew he was wrong. The meteorologist in Alabama came out and said, actually, that’s not true. Alabamians, don’t freak out. You’re okay. It’s not going to come here. And after that, the meteorologist at NOAA, the scientists at NOAA came out and said, don’t listen to the meteorologists in Alabama. Donald Trump is correct and there was a chance that it could have come to Alabama. And it’s that part right there that triggered an investigation by a nonpartisan group, the national academy of public administration and this week we got their final report on Sharpiegate. And what they found was that NOAA coming out and telling the Alabama meteorologist to stand down and to not correct Donald Trump was in fact a violation of their policy that all scientists at NOAA have to sign on to saying that they will not let politics influence science whatsoever at their organization.

Now that is actually an official NOAA policy and you can get in serious trouble for violating the policy. And according to the report from this nonpartisan organization, that’s exactly what happened. The agency scientific integrity policy explicitly prohibits the NOAA from allowing its communications or its conduct to be influenced by politics and that is 100% what happened in this particular instance. And again, it’s over something so stupid. You know, whenever a hurricane forms out there in the Atlantic, you have all of these different meteorological, meteorologists, wow, I’m having trouble with that word. But anyway, all of these different weather organizations from all over the world start making predictions. You know, it’ll be right off the coast of Africa and you’ll have the, the line saying, nope, this one’s going to go up and it’s going to fizzle out on the North Atlantic others will say, nope, it’s going to go into the Gulf of Mexico and hit smack dab in the middle of New Orleans. It could go here to Pensacola.

It could go to North Carolina, Georgia, wherever in the early days of it. When it’s, you know, thousands of miles away, nobody knows where it’s really going to go because the patterns are going to shift before then. And so yes, in the very early days of this particular hurricane, there was at one point 1 line that showed, hey, it could go through Florida across Florida and then up into Alabama, maybe. But by the time Trump had made the claim, that particular map, I think was a week old, at least. And the ones for the past seven days prior to Trump making the claim no longer had that. So Trump could have just said, oh, I’m sorry. I was, I was looking at this map over here. I should have been looking at this one, my bad.

But this man is showing capable of ever admitting that he made a mistake that it now had to become yet another quote unquote scandal that we actually had to have a fricking investigation for just to find out that yeah, his arrogance, his ego has now corrupted the very science at NOAA, at the NOAA. He has corrupted those scientists and the ones who did come out and tell the meteorologists over in Alabama to shut the hell up. They should be fired and they should be shunned from the scientific community. Because if you’re ever at a point in your scientific career where you let politics, whether it’s the right or the left influence your data, you have automatically given up any credibility that you ever had. And according to this report, that is exactly what those scientists up at the NOAA did.