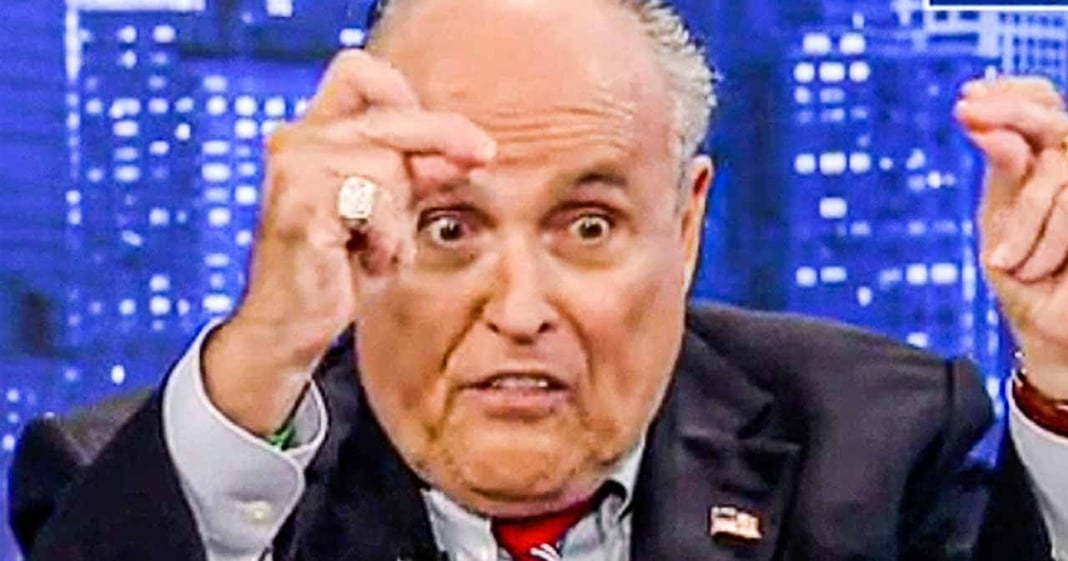 Rudy Giuliani hasn’t been in the spotlight very much since his good friends from Ukraine got busted, but he has decided that it was time to emerge from his hiding place with some horribly racist and completely false talking points. During an interview with Fox News this week, Giuliani claimed that black people actually kill more cops than cops kill black people, a claim that is not supported by any available data. Ring of Fire’s Farron Cousins explains what’s happening.

Rudy Giuliani has been doing his best, I guess you would say, to kind of stay out of the spotlights. After all, I mean, the man is under investigation last we heard up in the state of New York, to see if he was acting as an unregistered foreign agent. His good buddies Lev Parnas and Igor Fruman, you know, facing very serious criminal charges and they were central characters in the entire Ukraine scandal as was Giuliani himself. So Giuliani trying to lay low, but, you know, sometimes you just gotta speak your piece. And unfortunately for Rudy Giuliani, his piece that he had to speak this week was insanely racist. Giuliani re-emerged from whatever hole he’s been hiding it to appear on Fox news with Fox news host, Ed Henry, where Giuliani made the following racist claim. He said, after all more police officers are shot and killed, shot and killed by blacks than police officers shoot and kill African-Americans. The unarmed shootings, which are the ones that are troublesome.

They are only, there are only nine of them against blacks, 20 against whites in 2019. So that will give you a sense. Meanwhile, there were 9,000 murders of blacks, 7,500 of which were black on black. You know, I think it’s absolutely insane when people want to bring up the black on black crime when talking about literally anything other than black on black crime. That is not relevant to what’s happening here at all. Is it a thing that happens? Absolutely. Is it a thing that needs to be addressed? Absolutely. Just like white on white crime. Why aren’t we bringing that up too? Because we could talk about those numbers all day long as well. We talk about Hispanic on Hispanic crime, Muslim on Muslim crime, but you only want to bring up black on black crime when we’re talking about white people, killing innocent black people.

Wow. You know why you do that? Because you’re racist. You know why you only talk about black on black and not any race against its own race? Because you’re racist. That’s exactly what Giuliani’s talking point here is. Not to mention the fact that it’s also in addition to being racist entirely fabricated. What Giuliani just said is not true. Those are not even the numbers folks. Here’s the number that you need to know. 250 versus 48, 250 is the number of black people killed by police in the year 2019. 48 is the number of officers killed in the line of duty in 2019, total, killed by black people, white people, automobile accidents while they’re on the job. 48 total coast to coast in the country. Meanwhile, cops killed 250 black people. Now I don’t know about you, but Giuliani’s claimed that black people kill more cops than cops kill black people. Just knowing those numbers right there proves that he is lying his ass off. 250 versus 48 and not all of those 48 are killed by black people. Some of them, as I mentioned, literally just killed in average everyday auto accidents.

It’s a tragedy, but it had nothing to do with the fact that they were a police officer. But Giuliani doesn’t want people to understand that. Giuliani doesn’t want people to know that and Giuliani wants people to know that he doesn’t understand what the actual problem is. Because after he made these horrendous statements on Fox’s Ed Henry show, he sent a text message to salon.com because they asked for clarification and this is what he said in his text message clarification. He said, what I thought I said and meant to say was that police kill more whites than blacks. Even though blacks commit considerably more violent crimes. Last year, police killed 9 unarmed blacks and 20 unarmed whites. Even though blacks were both the perpetrators of violent crime and the victims of violent crime at a rate of 53%, 53%.

Now here’s the thing though, Rudy, you also have to understand percentages here in the United States, right? Because if they killed 7 blacks and 20 whites, proportionately, that’s still more blacks than whites because whites make up a larger part of the US population. So percentage of population wise, you did in fact kill more black people. And that’s how this works. We have fewer black people and more white people. So yeah, you would expect the numbers to be skewed, but unfortunately they are still not proportionate and that is something to always keep in mind. We have a problem with racist cops. We absolutely do. We have a problem with cops who may not think that they’re racist, but when it comes down to it, they act in racist ways and that costs black people their lives. Those are the kinds of things we have to get rid of here in the United States. It’s that ingrained racism that people don’t even realize they have. That’s the problem and until we address that, these problems we’re seeing right now are going to continue.