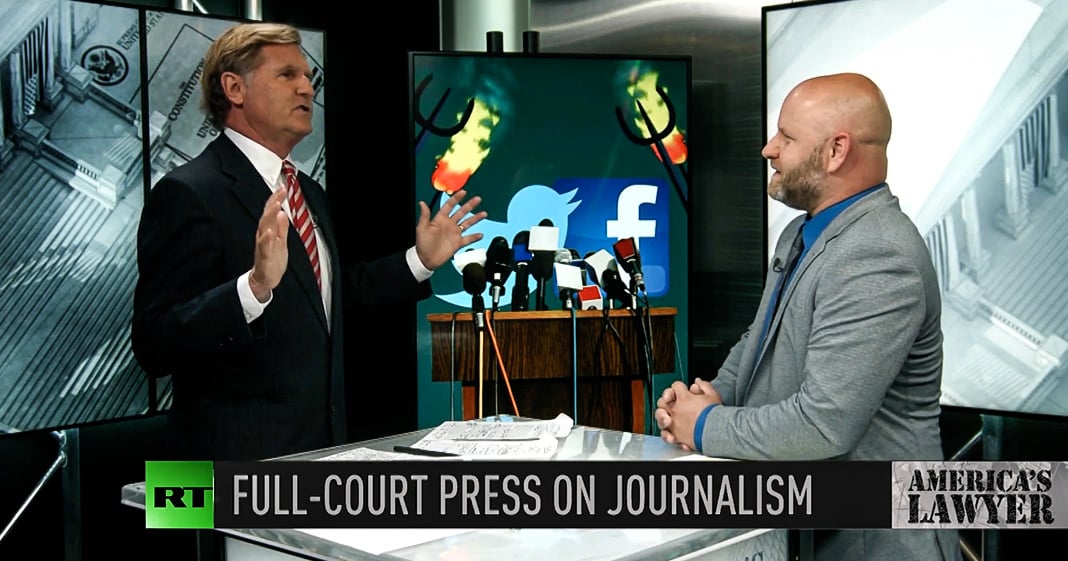 Mike Papantonio: A functioning press is vital to any democracy and the president of the united states is being dismantled by both major political parties. I have Farron Cousins here to talk about it. Farron, you are a real journalist. I mean, there’s, nobody gonna argue with you are a real journalist and you write reports that really matter. And in those reports, you do the damnedest things. You ask questions, and maybe you disagree with the narrative out there for the day. That’s what journalists do. There are, journalism is dying. We have a whole generation and I’m going to, they’re snowflakes. I mean, you got these snowflakes political correctness. It’s destroying our ability to even ask questions. This, this Matt Taibbi story that it was brilliant. Matt Taibbi is a real journalist. It’s brilliant. The guy’s one of the best in the business. Talk about it. I want to spend some time talking about what he had to say here.

Farron Cousins: Well, this, this has been, you know, a piece that absolutely blew up all over social media. You had a lot of people on the left, mostly saying Taibbi’s lost his mind. Taibbi’s gone off the deep end. He’s going conservative now because he dared write a piece that said, listen, folks on the left, it’s okay to ask questions if you’re a reporter. It’s okay to say, wait a minute, slow down a second, we may have something wrong. And Taibbi names, names. He calls people out as well he should, because that is what a journalist does. And I think a lot of times, especially on the left, we like to think, hey, we’re much better than conservative media, but that doesn’t mean everything we say or do is right.

Mike Papantonio: Okay. Let me preface this. You and I have been doing progressive left wing media for how many years?

Mike Papantonio: Almost two decades. Every time we do a story where some, some numb nut out in numb nut land on social media, disagrees with what we have to say, all of a sudden, oh my God, we’re fascist. We’ve said something that they can’t process. It’s like, they have an inability to think. So Taibbi does this story. Now, let me just tell you this Akela Lacy, Akela Lacy works for the intercept. The, Lee Fang, who you and I have interviewed so many times. He is brilliant. He is an actual, a real investigative reporter. Actually, he’s probably the person that had more impact on campaign financing than any journalist in the business, changing the way we go about it and talking about it. So all of a sudden, this Akela, Akela Lacy, she works for the intercept who, by the way, I’m always talking about what a great organization that is. I don’t know anymore. I literally don’t even know what the hell is happening at the intercept. So pick it up. What did this, what was this horrible thing that Lee Fang did?

Farron Cousins: Lee Fang had the audacity to, you know, speak to a African American activist who said, listen, we also need to be talking about crimes against African Americans, by African Americans. Which, you know, you can agree that maybe this isn’t relevant to what’s happening at the moment in this country. But the response from, from Akela Lacy, from entire social media against Lee Fang was absolutely disproportionate to the fact that the man asked a question while reporting a story.

Mike Papantonio: That is all he did. He asked the question, shouldn’t we think about the idea in our, this broad society, how we get under control black on black crime? I mean, what, 35 African Americans shot in the streets up in Chicago. You read it about every weekend. So he’s, he’s asking about it. He says, can’t we do better getting this under control. Well, the snowflakes on social media go crazy. Why? Because they’re unable to think for themselves. They’re terrified of questions. They it’s, I call it virtual, virtue signaling. Oh, I don’t, you know, I think like the celebrities think, let me, let me be on this side that everybody else is on and God forbid I should ask something that’s politically incorrect, according to social media standards. This Matt Taibbi got it right, didn’t he?

Farron Cousins: He did. And I’ll say, you know, too, maybe this isn’t probably the best time to be asking that particular question in the media. That doesn’t mean that Lee Fang was wrong to ask it, but it just means that it may be, it’s not related to what we’re seeing right now. And again, I agree with almost everything Taibbi has said here. Maybe not a hundred percent of everything, but one thing I certainly don’t agree with is the response that this has triggered from the left on social media. I spend a lot of time on Twitter, just reading people, basically, learning more about how people react to things. It’s a fascinating case study in humanity, just reading through Twitter and they lost their minds. Not because they disagree with him on everything, but because he questioned what the left had become. And that is something we do have to do, because again, he’s, Taibbi’s not going after Progressive’s here. He makes it clear in the piece.

Mike Papantonio: Oh he is a progressive. He’s probably one of the most progressives, important progressive journalists in America.

Farron Cousins: It’s these middle to upper class, you know, liberals who probably have done a horrible things in their past and now they’re trying to atone it by being the tone police.

Farron Cousins: Well, you know, and the other thing that Taibbi brings up in here is the Tom Cotton op-ed. Now that, that’s obviously spurred a lot of anger all over social media. You had the editorial chief, I believe from New York Times have to resign over this. And it’s because everybody now and look, I despise Tom Cotton with everything I have.

Mike Papantonio: Of course. How many stories have we done on Tom. We’ve done tons of stories about the guy. He’s a nut.

Farron Cousins: The man committed borderline treason with the Iran deal. But what they perceived him to be saying, what social media said he said, didn’t get said in the op-ed.

Farron Cousins: Because nobody took the time to read it.

Mike Papantonio: Nobody, they’d might have actually read the narrative.

Mike Papantonio: It showed up on Twitter crazy world, where, you know, it’s okay to be, it’s okay to be certifiably crazy on Twitter these days. And if it’s not politically correct, oh my God, all I am so disgusted and tired of these folks that call themselves journalists that don’t have an original thought. They’re terrified to ask an original question and look, can you imagine this editor on the Tom Cotton story going to leadership of the New York Times and groveling like a damn domestic animal saying, oh, I’m so sorry. I’m so sorry. That’s, that’s the level of journalism nowadays and it’s terrifying. It’s almost like, you know, I look at Chaz right now that, you know, Seattle.

Mike Papantonio: Okay. It reminds me of Lord of the flies. Now. Here’s what I mean, Lord of the flies, here you had these kids they’re in charge, you know, they’re, they’ve got control of their space. Look, what’s happening in Chaz. Okay. What’s happening there is you have literally warlords telling, you can’t be here because you don’t agree with this. You can’t be here because you said this. It is insane and we don’t even appreciate the level of insanity.

Farron Cousins: Well, you know, I do have to point out too. Like I disagree with everything Cotton does say in the op-ed because I took the time to read it. But at the same time he had a right to say it, New York Times has a right to publish it. And as Taibbi points out, unfortunately for, you know, those of us who disagree with it, polls show majority of people do agree with it. That’s what we have to accept as well.

Mike Papantonio: They’re, they’re so, they’re so worried about approval. They have become left wing grifters who want to sell more ads on their site because it’ll, it creates, it creates interest. They’re grifters. They’re nothing short of grifters.