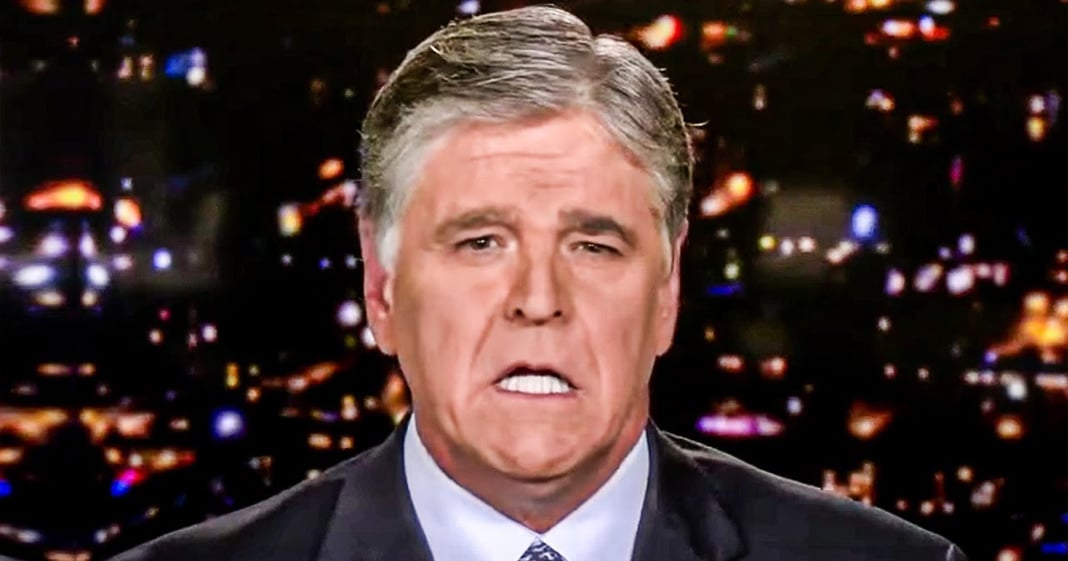 Fox News host Sean Hannity appeared to have either a nervous breakdown or a stroke on Monday’s broadcast, when he began ranting about the calls to defund and/or abolish the police and then digressed into a bizarre and impossible to follow rant about summer love parties and spaghetti. No one is really sure what the host is talking about anymore, and they are speculating everything from drug use to medical problems in order to explain this truly bizarre rant. Ring of Fire’s Farron Cousins discusses this.

Something happened to Sean Hannity during his Monday night broadcast, while he was talking about the efforts to defund the police. The, you know, talking point of abolishing the police, he decided to go on a rant, essentially borrowing a catchphrase from Ghostbusters. You know, who are you going to call when bad things happen if we abolish the police? But the rant didn’t quite go I think the way that it was supposed to go, because he ended up talking well, I’ll just let him do the talking. Here is what happened Monday evening when Hannity attempted, to ask, who you going to call when bad things happen. Here it is.

Sean Hannity: I keep asking a simple question. Middle of the night, somebody breaks into your house. Who are you going to call after they defund the cops? Who do you call when you’re in the middle of a summer love session, autonomous zone, where it’s like one big block party, which spaghetti, you know, whatever’s, dinner’s. Not gonna end well.

That’s right folks, when you’re in the middle of one of those summer love fests with all the spaghetti, who are you going to call? Right. Okay. Obviously this, this truly bizarre segment from Hannity has, has caused a lot of people in social media to mock him. And I, I’m no exception. I’m, I’m going to do that right now, because this is very weird. And I’m wondering if during that clip, because he starts off very lucid at the, at the start of it. He’s like, you know, hey, if we’re going to abolish the police, then what’s going to happen when, and then at that point, you’re wondering like, did you either just have a stroke or is that where the drugs kicked in? Because who are you going to call when you’re in the middle of a summer love fest with a spaghetti whatever’s and dinner? Yeah.

Like what the hell just happened? That’s not a normal train of thought. That’s the train of thought through drug town. That’s where that is. Like, that’s where the mushrooms kicked in and you’re like Summer love fest and, and spaghetti’s, ah, yes. Either that, or you’ve clearly never been invited to a party in your life. You know, like you hear people in the apartment next door having a good time and you’re like, oh, you darned people with your sex and spaghetti parties that I’ve never invited too. I’m assuming that’s what happens because I’ve never gone to one. What is wrong with you, Sean? Is this a cry for help? Is something happening? Is somebody hurting you in ways that we don’t know about? Please let us know, let the authorities know, oh wait, you can’t call them anymore. Right? Because they’re too busy with the summer love fests and the spaghetti things.

But in fact, that’s actually the point of the abolish the police is that somebody who would be having some kind of mental breakdown, you wouldn’t have to call the people with the guns. You would call a special task force of people trained to deal with these behaviors. They would come there, they would know how to handle things. They would know how to deescalate the person and not once would they ever reach for a gun. That’s the point, Sean. You made the point in your own video there when you had your little nervous breakdown. Who are you going to call? The people who are trained to handle people who behave the way you behaved in that segment without ever thinking for a second in their heads, I may have to kill this person. That’s the point.