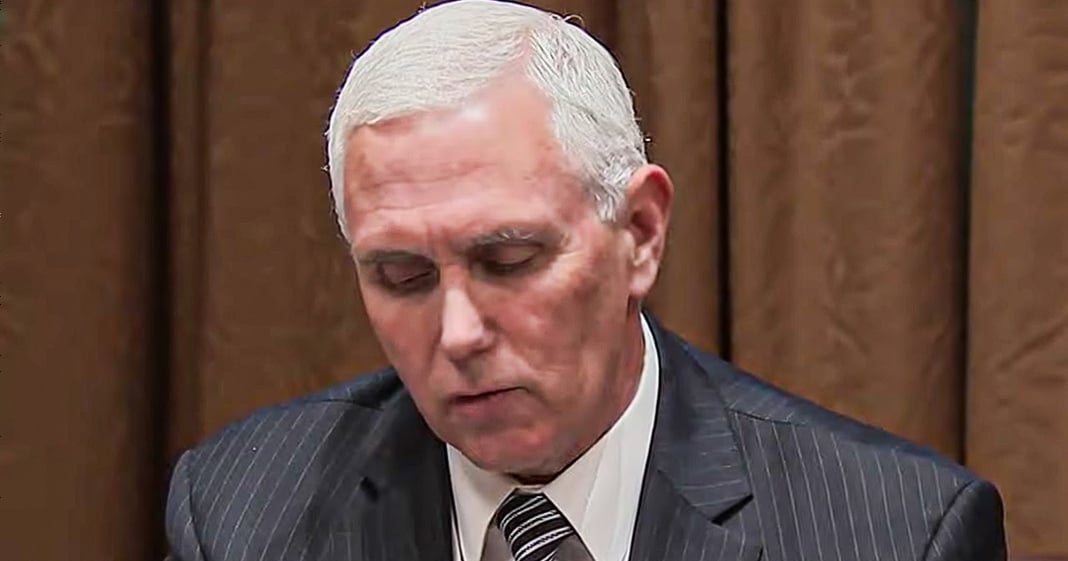 Vice President Mike Pence told governors around the country to lie to the public about the new wave of Coronavirus infections in their states, and to blame the major spike in new cases to a simple increase in testing. The testing rates have barely climbed, but the number of positive cases of Covid 19 have skyrocketed, so it is easy to see that Pence is lying in order to protect himself and Donald Trump. Ring of Fire’s Farron Cousins explains what’s happening.

On Monday members of the Trump administration had a phone call with governors from across the country to essentially instruct them how to lie to their citizenry about the rising number of COVID-19 cases throughout the country. And what Mike Pence told these governors to do was basically lie to them about what’s actually happening so that you don’t look worse. So that me and Trump don’t look worse, just lie to everybody. Here is what the vice president said and we know this is what he said by the way, because there is audio of the phone call. Here it is. I would just encourage you all as we talk about these things, to make sure and continue to explain to your citizens the magnitude of increase in testing, and that had most of the cases where we’re seeing some marginal rise in number there’s more, that’s more a result of the extraordinary work you’re doing.

You see when he said marginal? Okay, cases down here in Florida have more than doubled the average of what we were at a month ago. I mean, just yesterday alone was our highest day ever as opposed to four days ago, that was our highest day ever and five days ago was our highest day ever before those, we keep hitting new highs here in the state of Florida, and we’re not alone. It’s happening all over the country and the number of cases are literally sometimes double, triple quadruple of what we had a month ago. And Mike Pence has the audacity to tell these governors that it’s marginal and it’s only because of the great work that you’re doing. You’re aligning sack of human excrement, Mike Pence. And I’m pretty sure that little book that you claim to live your life by, that has quite a bit to say, I think it’s, they actually command you to not lie, you a piece of crap.

So you better hope that that little book that you base your life off of, or you allegedly do is pure fiction. Because if it’s not, you have now gained yourself a one way ticket to burn for all of eternity. That Bible tells you that. That’s what you did. Oh, you’ve been doing that for decades, let’s be honest, but let’s also be clear that lying is a sin. It is a sin, Mike, and you’ve done it repeatedly. He continues, as we speak today because people are going back to hospitals and elective surgery and getting ordinary care, hospitalization rates may be going up. But according to our most current information, hospitalizations for coronavirus are going down across the country. Okay. It’s the reason more people are in hospitals is because everybody’s doing those elective surgeries right now. You know, you want to get some plastic surgery done. Yeah. You can go do that. You know, your elbow has been bothering you. You want to get a surgeon in there to, you know, get that nerve on impinged, go do that. You know, you, you’re ankles been acting up, you’re going in. That’s what it is. It’s not coronavirus at all. No, totally, totally just the thousands and thousands of Americans every day who say, you know what? I guess now’s as good a time as any for me to go and get a, a liposuction. So I’ll see you all later.

Mike Pence lies as much as Donald Trump. You know, don’t think for a second that just because this man is not as brash and openly racist as Donald Trump, that he is in any way better. He is a bigot. He is a fraud. He is a liar, a hypocrite and a charlatan and a con man. And he is out there telling these governors to be the same thing, to lie to your people so that they think it’s safe to go about. Well, it’s not. You wear a mask, great. You socially distance. Awesome. Do those things and we can get through this. You know, you don’t have to be locked up in a bunker underneath your house cowering in fear. You’ve been told the things you need to do to go out in public, just do them. I don’t understand why that’s so hard. Just do these easy things, but we can’t do it. Republicans like Pence and these governors and Trump are telling us we don’t need to do it and the numbers are going back up. Folks, we could have defeated this thing a long time ago. All we had to do was collectively listen, but we didn’t.

And yeah, it is mostly these brain dead conservatives out there that doesn’t absolve Democrats of it. There’s plenty of bad ones out there too, but it is coming mostly from the, you know, right-wingers at this point and Mike Pence is telling them to keep doing it. Trump is telling them to keep doing it. Republican governors are lying to you about what’s actually happening about why things are so bad in the state. Oh, it’s all the testing we’re doing now. Nope. Nope. The increase in testing has not kept pace with the increase in total numbers of positive. Meaning the percentage of people being positive has not stayed consistent with the percentage increase in testing. I hope I explained that correctly. There’s more, you know, people now positive percentage wise than there were increase in testing. That’s the truth there.

So you can’t even attribute it to that, but that’s what Pence wants people to do. They want people to think that we have a handle on this. They want people to think that we’re doing a good job of this, that we know what’s happening, but they don’t. This is the most incompetent administration I have ever seen in my lifetime and I promise you that when all this is said and done history is going to upon them the exact same way. There is no excuse for what these morons are doing. There is no excuse for the amount of lying that we are seeing about this pandemic every single day. And I hope all of the religious people out there see it coming from Mike Pence, a man who is draping himself in the Bible and has for his entire career only to be proven to be absolutely fraudulent. Everything he says, everything he does, not a single bit of it is Christ-like. So religious folk who love Mike Pence for being religious, if you think that’s what religion looks like, you may want to pick up that book and read through it one more time.