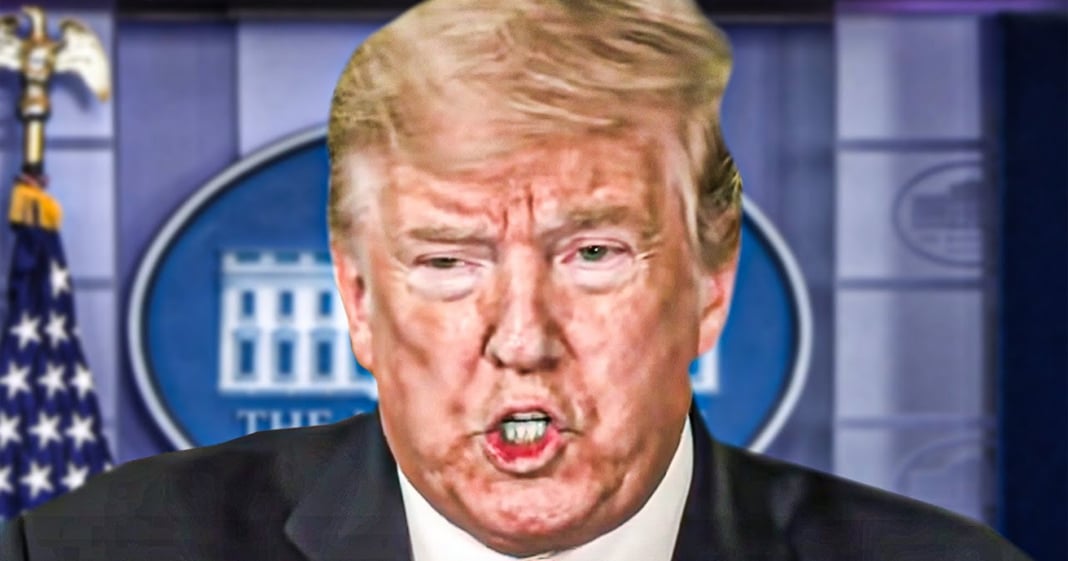 Republican officials throughout the deep-red state of Alabama are furious with Donald Trump for injecting himself into the Senate race for the seat currently held by Doug Jones. Republicans in the state have said that they want Trump to “butt out” and cancel his planned visits to promote the candidacy of Tommy Tuberville because they would prefer the nomination, and the seat, go back to their old pal Jeff Sessions. Ring of Fire’s Farron Cousins explains what’s happening.

Republicans in the state of Alabama are furious right now with Donald Trump and that’s a very weird statement. It’s a statement I never thought I would have to make because after all, Alabama is a red state. Alabama might be one of the reddest States, but they’re also going through a very contentious Republican primary for the Senate nomination there to fight Doug Jones, who is the guy, the Democrat who beat Roy Moore for Jeff Sessions’ old seat. Well, Jeff Sessions is no longer with the administration. He wants a seat back from the Democrat, but somebody else wants that seat as well. And that somebody is Tommy Tuberville, the former coach of the Auburn tigers football team there in the state of Alabama. And as a lifelong Auburn football fan, I can tell you, Tuberville was a good coach, some of the time. Last half of his career at Auburn, he got lazy.

He got stale. He got predictable and he acted like he didn’t care. And all of that came after an undefeated season one year where he did something good, then he just said, I don’t care anymore. And that kind of lets you know what kind of a politician he would be. Nevertheless, Donald Trump has decided to insert himself into this Senate race. And because Donald Trump hates Jeff Sessions with a burning, fiery passion, he has repeatedly and wholeheartedly endorsed Tommy Tuberville for this Republican nomination runoff. I don’t know if anybody is within the TV viewing area of Alabama, I am. Last night I was inundated with ads for the Tuberville campaign. Every single one talked only, only about Trump’s endorsement of Tuberville. That’s all Tuberville’s ads are saying, and this was multiple different ads all in one evening. So Tuberville is exploiting this.

He is letting people know I’m the Trump guy. You know, he’s painted MAGA on the side of his bus and pour little ole Jeff Sessions ain’t got nobody except all of the Republican officials in the state of Alabama and as I mentioned, they’re pissed off. They’re not happy that Trump has decided to come down to Alabama, literally and figuratively by the way, to kind of trash their hometown guy. Because that’s what Trump is planning on doing. Trump is planning on coming to Mobile, Alabama, which is Jeff Sessions, hometown, where everybody still loves Jeff Sessions and he’s going to do a rally and he’s going to get people to go out and vote for Tommy Tuberville and local Republicans do not want Trump to do this. And, and they admitted, that they’re torn. They want to love Trump because they do love Trump, but they also love Jeff Sessions.

He’s their boy. He’s their, their neighbor. They grew up with him. And yeah, he’s a horrible piece of crap, but he’s our horrible piece of crap. The whole thing is awful. The whole thing is awkward. The whole thing is very, very stupid because these are three horrible politicians and one, well, two horrible politicians, one horrible want to be politician with Tommy Tuberville. But Trump hates Sessions obviously because he recused himself from the Russia investigation and he believes that is what caused Robert Mueller to be appointed. But if, as Trump says, he’s been totally exonerated. Why still hate Jeff Sessions? Right? You got the outcome you wanted. So why hate Jeff. Doesn’t make much sense. Jeff Sessions for his part is a horrible human being, always has been and always will be. He holds ass backwards and false beliefs about race, about drugs and about so many other things.

And Tommy Tuberville, as I mentioned, his coaching career, he did one good thing one time, and then he just gave up because he’s a lazy person. So that’s what Alabama is looking at. But unfortunately, either Jeff Sessions or Tommy Tuberville is going to be the next Senator from the state of Alabama. Doug Jones only won a Democrat, only won that seat because he was put up against a guy that was accused of pedophilia. And even then Jones only won by a couple points like that was still a nail biter. So Doug Jones is not going to win the seat and that is not attacking Doug Jones. That’s just letting you know what Alabama is like. But they’re mad right now. The Republicans in Alabama, they’re mad because Trump has inserted himself. They’re confused because they want to support Sessions, but they want to support Trump and they like them both. But if Trump’s saying don’t support Sessions, they don’t know what to do.