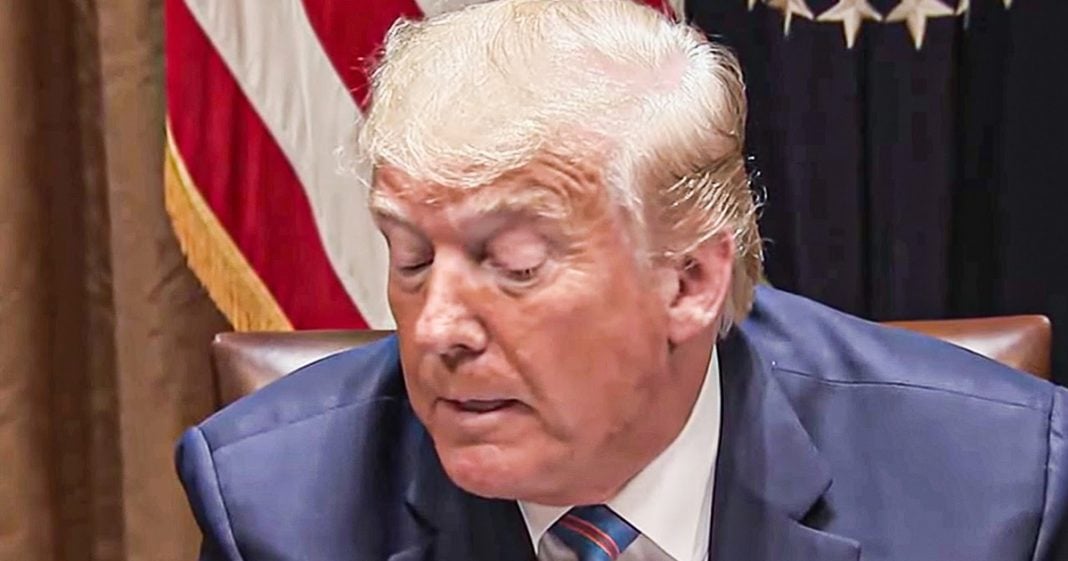 According to reports, Donald Trump’s team is starting to freak out because his messaging about the protests isn’t resonating with voters. His poll numbers are tanking with each new poll that comes out, and he refuses to abandon his “law and order” approach to injustice. The public sees Trump for what he is, and his team knows that this could mean the end of his administration. Ring of Fire’s Farron Cousins discusses this.

According to a report by the daily beast, the Trump team right now is “terrified” over the fact that their racist, dog whistling is not working anymore and based on what’s happening around the country, it doesn’t appear as if their racist, dog whistling is going to work for them the way it did in 2016. And of course that absolutely terrifies them. If they are unable to convince the American public, to be afraid of what has consistently been called throughout the decades “the others”, if they cannot generate that hatred against “the others”, their goose is cooked and they know it. And right now there does appear to be an awakening here in the United States. People of all races are waking up to the racial injustice that some Americans have faced every day of their lives. We’re seeing it now, or we’ve always seen it. We are choosing to not ignore it anymore.

I think that’s the better, better way to say it. We’ve all known that it’s always been there. It’s just a lot of people in this country have been more than comfortable to pretend it doesn’t exist. But it’s getting harder and harder to do that and fewer people in this country are willing to do that. So when Trump goes out and calls these people thugs, when he talks about crime in Chicago, we all know what that means. That’s coded language for black people and it’s not working this time around. So as the daily beast reports members of the administration, members of the reelection campaign and members of the Republican party in general are terrified because they believe that because the racist dog whistling is no longer working, that it could spell doom for the Republican party in November this election. And to be honest, it should.

Now there’s plenty of reasons to not vote for Republicans. There’s lots of reasons why these people should lose their power. You know, top of the list would probably be the fact that the president himself has committed multiple different crimes and has seemed to have gotten away with all of them. Right? I think that’s the kind of area where you need accountability, but also the racism thing. He has been hugely racist, both in words and deeds. We have seen it with his travel bans. We have seen it with his actions against immigrants and especially his words against immigrants. In fact, that is how he even came to power in the first place by telling Republicans back in 2016 and, and average American voters, that the reason their life was so crappy right now, things weren’t working for them was because immigrants. You know, you lost your job because of immigration.

You’re not getting good wages because of immigration. You know, people are dying in this country because of immigration. Immigrants are doing these things. You have to hate these people. We have to get rid of these people and if you and I work together on it, just vote for me, we’re going to do it. And it was all a lie, folks, every bit of it. You’re worse off now economically than you were four years ago. And we’ve got more people in cages today than we did during the Obama years. We had them during the Obama years, don’t get me wrong, but we got even more now. We’re treating them even worse than we did back then and did your lot in life improve? No, and you know it, and polls are reflecting that you know it, and when the president goes out there right now and tells you in the coded language that non-white people are bad and that the white cops are good.

You know, it’s not true too and the polls reflect that as well. So no matter what the president has tried in the last two weeks with these racist dog whistles, they’re not working. And that is sending shivers down the spine of every Republican in DC. Because if they can’t get that to work, that same talking point that they’ve been using for 40 years nationally, if that suddenly doesn’t work for them, then they have nothing else to run on, to get their base ginned up, to turn out and vote for them. They are effectively as a party, dead in the water at that point.