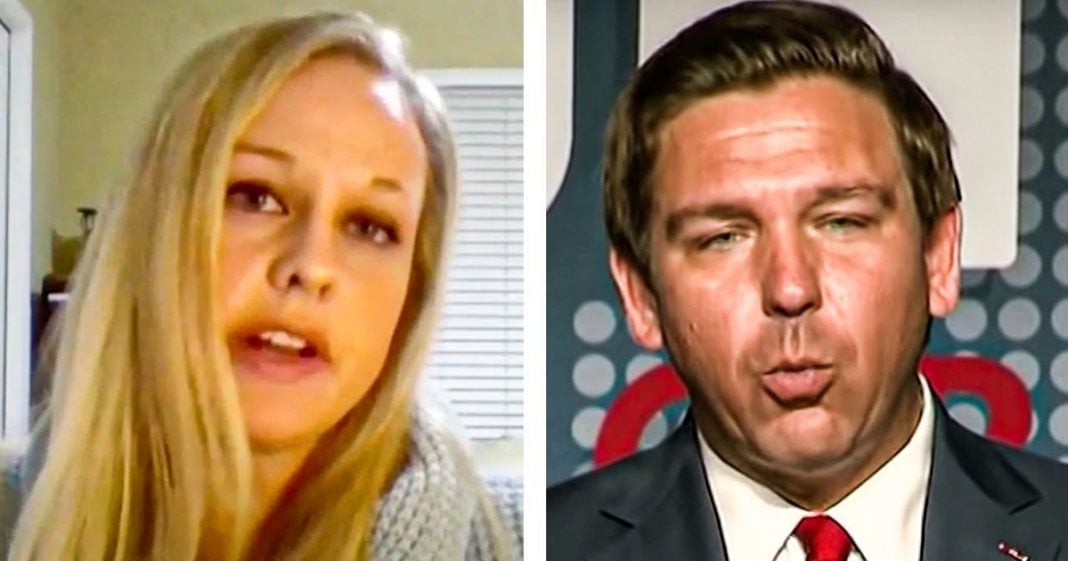 The scientist that Florida Republicans fired after she refused to alter the Coronavirus for the state has returned, and she isn’t taking orders from the GOP anymore. The scientist, Rebekah Jones, has decided that the data is too important to trust to the politicians, so she has decided to publish it on her own to keep residents of the state informed about what is really happening. Ring of Fire’s Farron Cousins discusses this.

Several weeks ago, we told you the story of Rebekah Jones, a scientist from the state of Florida, who many months ago as the pandemic was just beginning, created the database for the state of Florida, the dashboard, essentially for the state to use for coronavirus tracking and for citizens to use for coronavirus tracking. She was fired, according to her, for refusing to alter the data. From what she told in her story, essentially the government of Florida wanted to keep the numbers low, but the numbers weren’t keeping themselves low. So they asked her to go in and, you know, kind of doctor it up a little bit, take away some of the positives. Take away some of the deaths, you know, not necessarily lie so much as change the criteria for what it means to be a coronavirus positive or a coronavirus death.

Meaning if you have coronavirus and you die from it, but we also find out that, oh, you had diabetes. We’re going to go ahead and put you down for diabetes instead of, you know, coronavirus, that was one of the ways the state wanted to adjust the numbers there. And they wanted Rebekah Jones who created this to go in and, you know, fix it. She refused, she was fired for insubordination and here we are several weeks later and she has decided enough is enough and she’s fighting back. So what Rebekah Jones has now done to essentially take on the corrupt Republicans in the state of Florida is she has created the database again, the dashboard again, except it’s not running through the state this time. She doesn’t have to get their approval. She has just created it as a tool for people in the state of Florida to use whenever they feel like, whenever they need it, so they can get the accurate numbers.

And yes, her numbers on her website are clearly higher than what the state has reported. And she explained why in an interview, she said, it’s because in the state of Florida, we’re counting, we’re over counting the number of tests that have been done. We’re under counting the number of positive cases and deaths so that we can look better. She’s not doing any of that. You know, she is not counting people as going to get an antibody test as having been tested for coronavirus and coming back negative. The state of Florida does. For example, my office actually did free antibody testing for everybody there. I got the test. I did not have the antibodies, but according to the state of Florida, I am now somebody who’s been tested for coronavirus and came back as not having it. So they get to count that in their positive numbers. Her algorithm doesn’t do that.

It does differentiate these and that is important. Her death toll is also higher because she’s counting everybody who dies of the virus in the state of Florida. Another thing the state of Florida isn’t doing, according to Rebekah Jones, is if somebody died in the state of Florida from coronavirus, you know, was in the state, developed the symptoms, went to the hospital or went in quarantine and here in Florida and they died from it. If that person was not a legal resident of Florida, they didn’t count it as a death in the state. And that’s not how it works. You know, if you’re, if you’re driving in a car in, in a different state and you get in an accident and die, you still get counted towards that States automobile fatalities. You don’t get to just ignore that because, oh, it was a, it was a tourist around here.

No, but that’s what the state of Florida has done. So Rebekah Jones is taking on the corrupt Republicans in this state, the corrupt Republicans who tried to shut her down, who tried to silence her and now they can’t do that anymore. And hopefully residents here in Florida will use the resource that she has created so that we can finally see what’s actually happening in our state. We know that these numbers have been under reported. We have heard the stories from the morgues that have said that the state came in, the health department came in from the state and said, do not test these people for coronavirus. They can’t get away with that anymore. Real scientists are taking charge and we need a little bit more of that in this country.