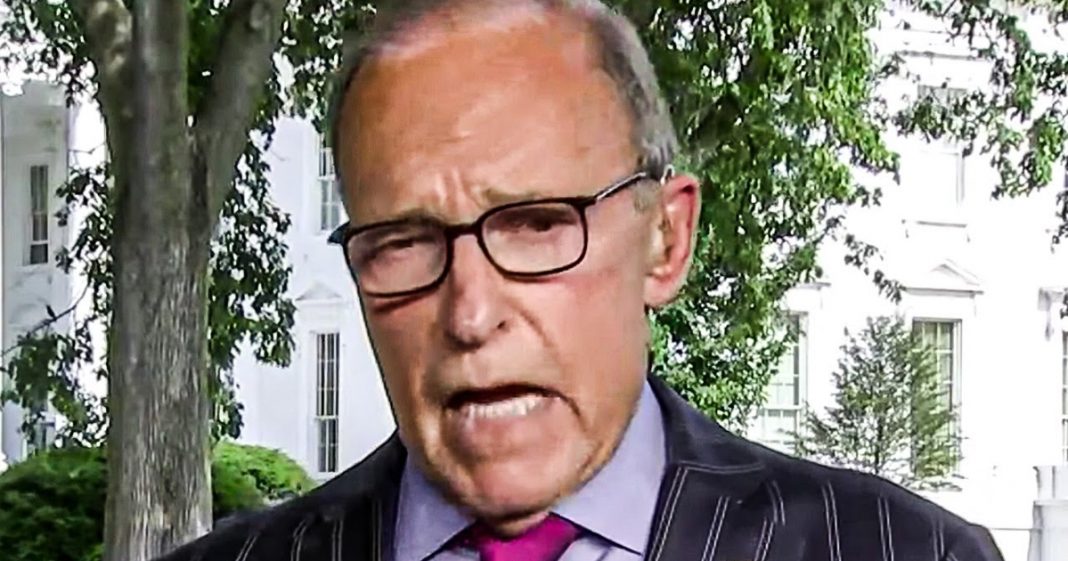 Larry Kudlow, Trump’s millionaire economic adviser, believes that giving unemployed people an additional $600 per week during a global pandemic and national economic emergency is just far too much, and that we’d just be paying people to NOT work at that point. What he’s really saying is that poor people are too greedy and lazy and would prefer to not contribute to society. This is what Republicans have always believed, as Ring of Fire’s Farron Cousins explains.

Trump economic advisor, Larry Kudlow, believes that poor people in the United States and people who do not have jobs, they’re just too darn lazy and more importantly, they’re too darn greedy. According to an interview, Kudlow did this past weekend, he wants to end as soon as possible, it’s most likely going to be towards the end of July. He is going to end the $600 per week in extra unemployment payments that unemployed Americans have been getting as part of the CARES act during the coronavirus pandemic. Because according to Kudlow, we’re paying people too much money to not go out there and work. His exact quote was, I mean, we’re paying people not to work. It’s better than their salaries would get. Isn’t that more of an indictment of how shitty we pay workers here in the United States? You know, if, oh no, we can’t give them unemployment benefits because then they make more money.

Yeah. That’s a problem with corporate America, Larry, not a problem with the government or with the people themselves. Maybe you should be directing your anger at those corporate bosses, you used to talk about how awesome they were every single day on him on CNBC, huh? Maybe those are the people where you should be directing the anger. But no, you’re a Republican. So of course you directed at the people who don’t make much money. It’s somehow their fault, right? They go to work, but it’s never good enough, right? It’s never good enough for you and your other Republican idiots. Nothing’s ever good enough for you for the poor people. But there’s plenty of things that are too good for the poor people. You know, like making extra money because they can’t work because there’s a frigging pandemic happening, you idiot. And that’s the problem here.

These unemployment benefits were extended thanks to Bernie Sanders who got this into the bill. Credit is due to him for this, you know, what could have been right, with the presidential primary. But anyway, he got this in there. It passed, but it is set to expire and we’re coming up on that expiration date pretty damn quickly. And when it does expire, Republicans have made it clear they’re not going to extend it. The Democrats have made it clear that nothing’s off the table. You know, they’re even open to giving corporations immunity from lawsuits if they open up and they’re, all their workers get coronavirus, they’re open to whatever. So these unemployment benefit extensions are going away. They’re going away. Bernie did it once. He’s not going to be able to do it again. They’re going to shut him down and that’s sad, that’s unfortunate, not for him, but for the 40 plus million Americans who’ve lost their job during the pandemic.

This administration is trying to intentionally hurt people. And we know that because Kudlow said that maybe the next, maybe the next stimulus package that won’t come around till end of July, maybe that one will include bonuses for people who do go back to work. So if you’re willing to go out there and put yourself in harm’s way and put your family in harm’s way and, you know, possibly spread the virus to countless other people and maybe even kill them with it, who knows. If you’re willing to do that, Larry Kudlow has got a pocket full of cash for ya. That’s what he’s talking about because when it comes to kick-starting the economy or boosting the stock market or whatever it is, you’re an expendable pawn to the Republican party, and they would gladly throw a few dollars at ya if you’re willing to die for the gods of wall street.