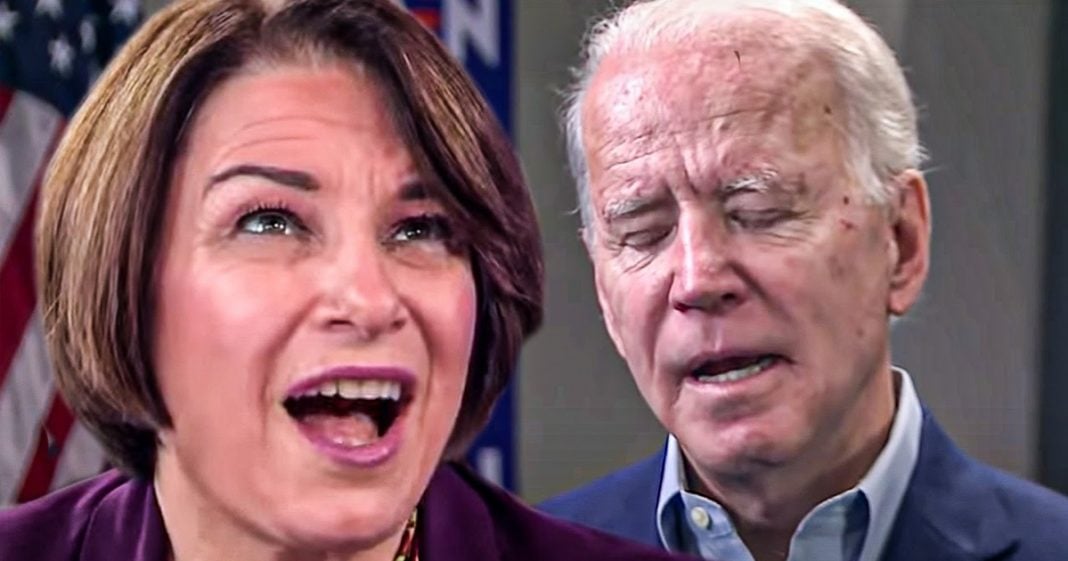 Former Presidential candidate Senator Amy Klobuchar is no longer in the running for the VP slot on the Democrats’ 2020 ticket, according to a report by the Associated Press. Her failures as a prosecutor in Minnesota sealed the deal, but there are still lots of questions about who will take that prize. Ring of Fire’s Farron Cousins discusses the importance of the VP slot on Biden’s ticket and how he could potentially screw it up.

The associated press reported this week that Amy Klobuchar is, even though she’s still being vetted for potential vice presidential pick for Joe Biden, but she is effectively out of the running and is no longer really on Joe Biden’s shortlist. In fact, as the associated press reported, there’s about six women right now, who are the finalists and Amy Klobuchar is not one of them. And the reason for that is because Senator Klobuchar during her time as prosecutor in Minnesota, refused to prosecute officer Derek Chauvin, for killing a minority. Didn’t prosecute him. He stayed on the force and we all know how that story ended, right? That’s why, what we’re seeing happening in this country right now is happening. This is what sparked it. Derek Chauvin killing an unarmed black man and Amy Klobuchar could have stopped it way back when, but she didn’t.

In fact, she let lots of instances of police brutality and police murder go unpunished, unprosecuted. So that according to the associated press is why Klobuchar really is no longer being discussed as a potential, a potential pick and that’s a smart decision on team Biden’s part. You know, that is a very good job of reading the room right now. Klobuchar ain’t it. In fact, Klobuchar’s failures as prosecutor have likely doomed any future aspirations she may have had, as well they should. She is clearly part of the problem and apparently hasn’t learned anything from it either. So yeah, bye. We don’t want you anymore. As for the six women who have made the, top six, the finalists as they’re called in this article. But it is also worth pointing out the, it is six women because Biden was asked many, many months ago, if he would commit to picking a woman, he said, yes, he has stuck to that.

Several of these actually African American women too. So anyway, here they are in no particular order, this is not, you know, best to worst or whatever. This is just how they list them in the article, Atlanta mayor Keisha Lance Bottoms, representative Val Demings from Florida, Michigan governor Grisham, Senator Kamala Harris, former national security advisor Susan Rice, and Senator Elizabeth Warren. Some of these names terrify me as a VP pick. Grisham, Harris, absolutely in my book, probably the two worst picks out of that list of six. Harris, obviously as the prosecutor in California, failed, refuse to prosecute Steve Mnuchin and, and other bankers for all of the crimes they were committing. All the money they were essentially scamming out of consumers in California. She shut down the investigation. They had hundreds, hundreds of evidentiary complaints against Mnuchin himself, and she shut it down.

That to me, grounds for dismissal, absolutely unforgivable sin that should have tarnished any future aspirations she had. To a degree it has. I think that’s what helped, you know, tank her presidential aspirations. But, she shouldn’t be rewarded with a VP nod not after that. Grisham, to me is somebody that people have not paid enough attention to. If you look at Grisham’s record with the water in Michigan, that’s where people need to focus, right? She came in, obviously during the Flint water crisis. Now she didn’t cause it, but she hasn’t done a whole heck of a lot to solve it and that’s just the surface of the water problems that she’s having in Michigan. For example, she was, you know, cutting off the water for poor people that weren’t paying their bills until an environmental group had to step in and say, please, you’re going to get people killed, stop turning off the water.

Okay. She really didn’t have much compassion and to me that also is a nonstarter. Elizabeth Warren, I am not of the group on the left, which, you know, they have their reasons. I have mine, but I do not hate Elizabeth Warren by any stretch of the imagination. I’m very disappointed that she has backtracked on her most progressive platforms, but I do believe at the end of the day, she would be a strong advocate for consumers. So I’m not anti Elizabeth Warren. Now what does concern me about Warren is obviously the attacks coming from Trump against Warren. He has been going after her for well over a year. A well-established line of attack that his supporters also like to go out there and say, so I don’t know if, if she would be the best pick. Atlanta governor, or excuse me, Atlanta mayor Bottoms and then of course, representative Demings, Georgia and Florida respectively.

I think it’s kind of obvious why he’s going after these two African American women. Trump has problems with African American voters. Biden does fairly well with them, would do even better with a, you know, African American woman on the ticket with him. So that’s definitely a plus for him. They’re in swing States, that’s a plus for them. They don’t have huge histories behind them. So probably not a lot of dirt there to dig up on them. You know, not perfect, but, and, and that’s also scary about not having a huge record behind them is there’s not a lot to kind of gauge who they really are. They could be great, or they could be, you know, just kind of corporatist type Democrats. I’m sure as this thing goes on, we’re going to find out a lot more about them, but, they could also be very smart choices for the campaign. So anyway, that’s where we are. I think the most important takeaway at the moment though, is that Klobuchar did herself in, by failing to do her job when she was a prosecutor in Minnesota and that not having her a part of this conversation anymore, that’s a smart move for the Biden campaign.