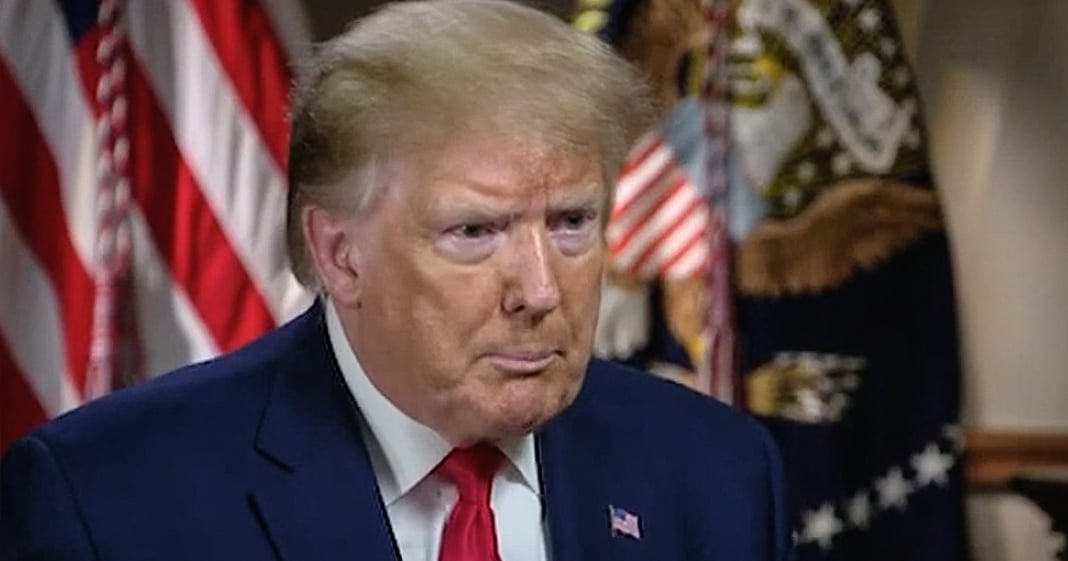 During a recent Fox News interview, Donald Trump claimed that the “concept of a chokehold” sounds “so innocent and perfect.” This is at a time when racial tensions are boiling over, police are being exposed as bigoted thugs, and black people are dying from things like “perfect and innocent” chokeholds. As long as Trump is in office, there is likely to be very little progress made, as Ring of Fire’s Farron Cousins explains.

On Friday, Fox news aired an interview with Donald Trump, where Harris Faulkner Fox news host asked Donald Trump about chokeholds and police officers. That’s been a big topic of conversation, obviously, for the last few weeks, although it’s really hard to classify what happened to George Floyd as a chokehold. I mean, it was a knee to the neck, not exactly a classical, you know, chokehold. But Democrats with their legislation, excuse me, have attempted to ban the chokehold, even though it is already banned by a lot of States throughout the country. It was banned where it was used. It’s been banned where it’s already killed people, but it was still used to kill people. So sure, good job there. But nonetheless, this is about Trump, right? He goes on Harris Faulkner with this interview. And first he says that he doesn’t like the chokehold. Shouldn’t, shouldn’t be there. It should be illegal. It should be banned. And then he immediately says, but you know, if it’s a single officer there, kind of need it to happen. He says, you know, when you’ve got someone who’s a real bad person, what are you going to do now? Let them go?

So I guess you need the chokehold when it’s a really bad person, according to the president, those are his words. When it’s a really bad person, what else are you going to do? He went on to say, I think the concept of chokehold sounds so innocent, so perfect. And then you realize if it’s a one-on-one, but if it’s a two on one, that’s a little bit, a different story. Depending on the toughness and strength, you know, we’re talking about toughness and strength. There’s physical thing here too. So not only could he not exactly finish his thought because the man has severe mental problems, but he described chokeholds as so innocent and so perfect. We have seen far too many people in this country murdered by police officers using a chokehold. I can’t breathe. Ring a bell? Ring several bells? Because we’ve now heard it from multiple different unarmed black men as they’re being murdered by police officers.

I wouldn’t classify that as something that is either innocent or perfect. But here’s the sad truth of the matter here. As long as Donald Trump is president, there will be no national action on this issue in this country. Absolutely not. He just made it clear that whatever legislation Democrats put forward, he ain’t gonna sign it. He likes the chokehold. It’s innocent and perfect and if you, you know, if there’s more than one on one, then you know, maybe it’s bad. But if it’s one on one, totally, choke each other out all you want. So he’ll never sign a piece of legislation that bans this move. Not that the ban has done anything good because we have already seen men killed in areas where the chokehold has been banned. We need real reform, a complete transformation. We need to get these killer cops off the street. We need to defund the police across this country.

They should not be equipped like their own mini militaries in their cities, yet they are. Meanwhile, school lunch debt exists, but cops have all of the firepower, the weaponry, the armored vehicles they could imagine and yet kids at school are going hungry. They’re throwing away hot lunches because they can’t afford to pay it. Let’s defund the police and fund literally anything else. That’s what has to happen, but it will never happen as long as we have somebody like Donald Trump at the very top of the political food chain, he won’t allow it and so we got to get rid of him. I’m not saying Biden’s gonna allow it either. He has made it clear that he does not support the defund the police movement, but we have a better chance of moving Biden slightly on the issue than we have of making any reforms under Donald Trump.