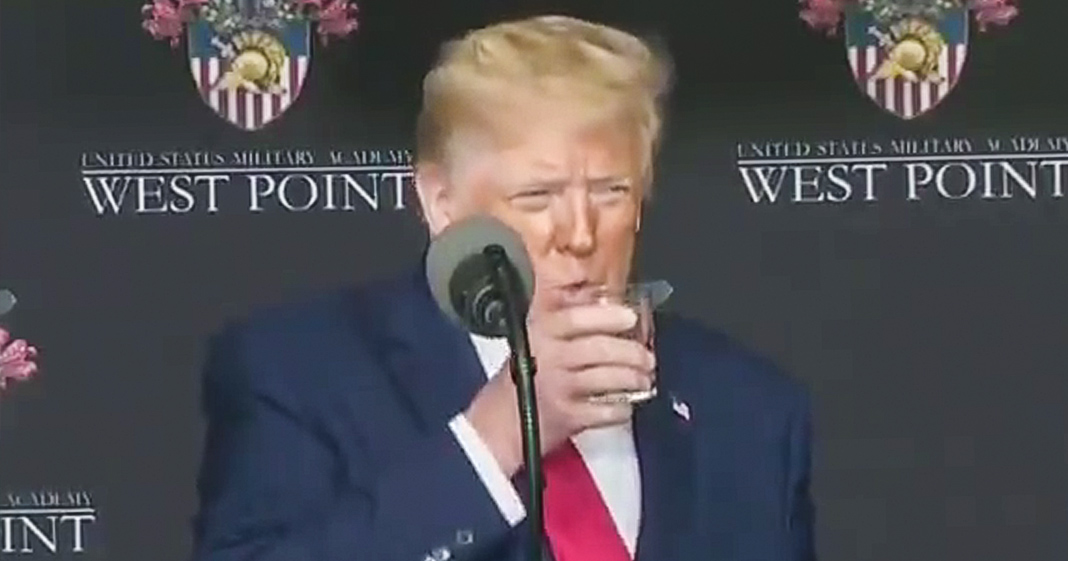 During a ceremony at West Point this weekend, Donald Trump got thirsty and needed to take a sip of water. And, as always, he couldn’t quite figure out how to do that. There are now multiple different bizarre instances of Trump attempting to drink water like a human being and failing miserably. Is this a sign that something is seriously wrong with him, or is he simply weird? Ring of Fire’s Farron Cousins discusses this.

On Saturday during a speech at West Point, Donald Trump got a little thirsty. You know, it happens. You talk a lot, your mouth dries out, you need some water. So he reaches under the podium and gets his cup of water and then this happened.

You know, if this was the first time Donald Trump ever acted like he’s never drank from a cup in his life, maybe we could let it slide. Right? But this guy ever since he was even running for president has this weird history of not being able to properly drink water. It truly is bizarre and I don’t know what’s happening with this guy. I mean, this is a guy who actually mocked Marco Rubio while he was on the campaign trail, for Rubio’s state of the union response many years ago, where he had to, you know, oh, reach off screen and graph his water. And Trump mocked that in a speech and then didn’t know how to drink from his own water bottle immediately following that and then just started like, throwing it out there onto the crowd.

And of course there’s the other times when he couldn’t, couldn’t get his cup and he’s trying to figure it out. It’s, it’s weird and it’s creepy and it’s a sign that there’s something wrong with this guy. And if you don’t believe me, well, then take a look at this super cut of all of the times that Donald Trump didn’t know how water worked. This was shared on Twitter by Aaron Rupar. I do not know who originally created it, but whoever it is, thank you very much. Here is the clip of Donald Trump repeatedly trying and failing to do the simple task of drinking water. Here it is.

Donald Trump: Japanese companies have announced investments into the United States worth more than $8 billion, 17,000 jobs. Thank you. Oh, they don’t have water, that’s okay. What? That’s okay. In China, we also announced $250 billion worth in trade investment deals that will create jobs in the United States. From China, I flew to the city of Da Nang in Vietnam.

So there it is. I mean, you can see for yourself clearly there is something wrong with this guy to where he doesn’t know how to drink water. Is that something we as his constituents, his, you know, citizens should be concerned about? Probably, I mean, of all the characteristics you want in a president, I would think knowing how to drink from a big boy cup should be right up there at the top.