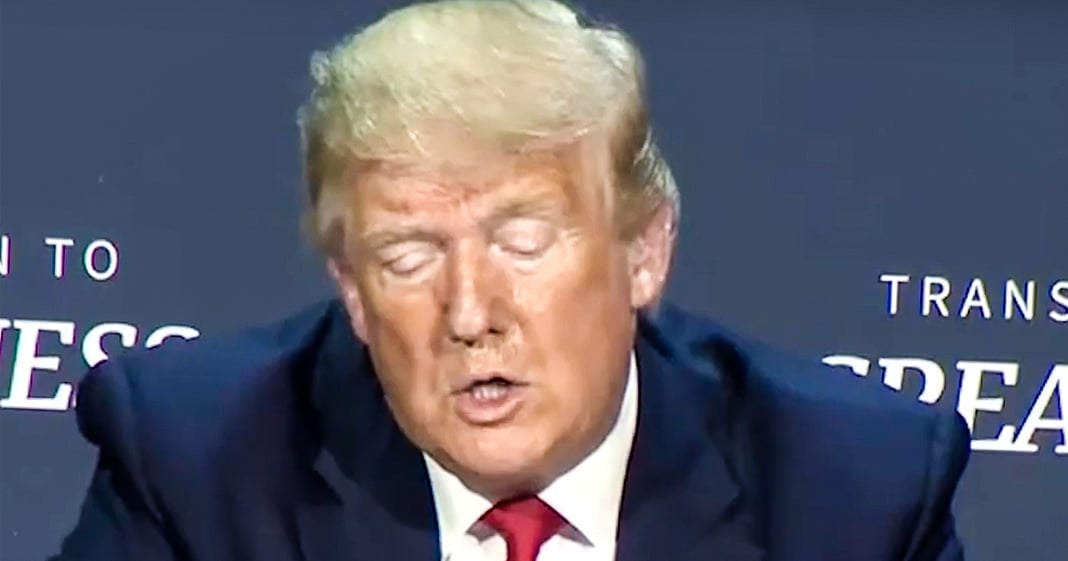 The Trump administration is desperately trying to convince Americans that they aren’t forcing people to go back to work, but their policies tell us otherwise. By changing the rules for unemployment, they ARE effectively telling people that fear of the pandemic is no longer an excuse to not be working. And as more and more workers continue to get sick and the virus continues to spread, Trump and his team are starting to look ever more incompetent. Ring of Fire’s Farron Cousins discusses this.

The Trump administration has a bit of a problem right now. They need the economy to essentially go back to where it was six months ago, but they need it to happen right this second. You know, not a gradual process. It has to be something that really shifts overnight, because if it doesn’t, they’re screwed in November. The public is not going to reelect a man who allowed the economy to go completely down the toilet and so what they’ve done obviously, is they have encouraged States to reopen. They have criticized States that were slow to start their phased reopening. And what we’re seeing across the country right now is a massive, massive spike in daily new coronavirus cases. It is happening across the board. It is happening in red States. It is happening in blue States though. It’s happening more in red States, it’s happening in States that up to this point had not seen huge numbers of cases.

States like Alabama. Well guess what? Now they are. The state of Florida, my state here on Friday and Saturday, we lead the country in daily, new positive coronavirus cases. Things are getting so much worse and by the way, folks, this isn’t the second wave. This is still the first wave because numbers never actually started going down. They had just leveled off and then we thought that leveling off meant everything was okay. So everybody starts their phased re-openings and uh-oh, just as literally everyone with a brain predicted, cases shoot back up and that’s what’s happening right now. And so again, Trump has a problem here, because it’s kind of hard to go back and say, all right, everybody, you gotta close it down again, close it down, close it down. I don’t think the re closings are going to happen. Certainly not going to happen in any red States at all.

Florida will not shut back down. They should, people are dying every day, a lot of them, but they will, they will not shut back down. So here’s the thing. Trump administration is out there right now trying to claim that they never, never told people to go back to work if it wasn’t safe. That is what a labor secretary Eugene Scalia said last week. He said, we never told people to go back to work if it wasn’t safe. In fact, he said, just to be clear, we have never suggested that workers should sacrifice health for returning to work. We oppose them being put to that choice as well. He said that at a Senate hearing last Wednesday, except that Donald Trump has gone out there and said the workers in the economy, you’re my warriors for the economy. And we have actually seen members of this administration and of course, members of the Republican party saying maybe we just have to sacrifice our health, you know, sacrifice grandma and grandpa like Texas, Lieutenant governor, Dan Patrick said, and go back to work.

So you’re a frigging liar Eugene Scalia. Like daddy likes son, right? Piece of crap is what you are. So here’s the thing. This administration right now is trying to distance itself from its statements that are all on record and there’s video of every one of them. So they think we’re all morons walking around this country, pretending they’re not telling us to go back to work. But that’s just the public face of it, right? That’s just what’s happening that we can see. What they’ve done behind the scenes is force people to go back to work when it’s not safe by slashing unemployment benefits. They have now changed the rules back to what they were before and it says that if you decline a job offer, or if you refuse to go back to work because you are at high risk of contracting and having serious complications from COVID-19, you no longer qualify for unemployment.

You do not qualify if you willingly say, no, I’m not going to work because I can’t risk getting sick. That’s on you at that point. That’s not the economy saying we don’t have a job for you. You lose your unemployment benefits. So yes, Eugene, you are forcing people back to work. You personally, by the way, because that’s your department’s policy. You did this you piece of crap. Oh, I’m sorry do I seem, seem a little angry about this today, folks. Well I am and I’m going to continue being angry because this pandemic is getting worse and everybody’s acting like, oh no, everything’s fine now. Everything’s cool. No, it’s literally worse than ever in this country and we’re kind of unique with it getting worse. Other countries, you know, in the early days of it, yeah, I got worse, but then it got better because they, all they had to do was listen.

They listened. They wore masks. They socially distanced. They worked from home. We’ve done those things to an extent, not as much as we should and then we just ended it because I guess we got bored with it. And because we have a group of morons running the federal government. Morons like Eugene Scalia, morons like Donald Trump, morons like Steve Mnuchin. All of these men who are in a position of power that have been urging us to go back to work, Larry Kudlow economic advisor to Trump, same thing. These jackasses want you to die so the economy can do better so Trump has a better chance of winning reelection. Get that into your heads because that is what is happening right now.