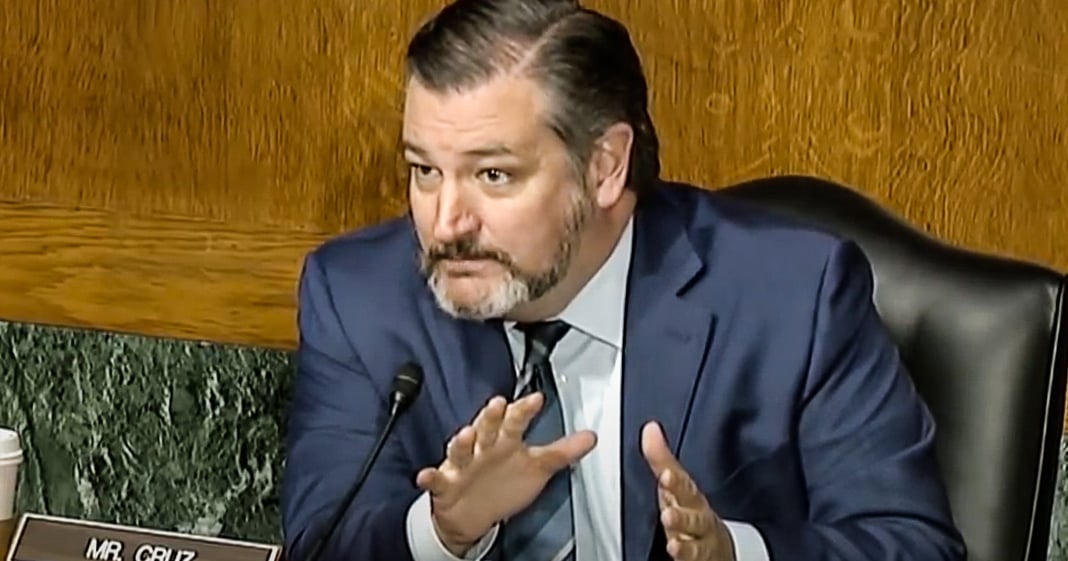 Actor Ron Perlman loves taking on right wing “tough guys” on Twitter, and after dragging Matt Gaetz for a few hours, Ted Cruz decided to jump in and defend the honor of his Republican brethren. Unfortunately, all Ted Cruz is capable of doing is making things weird and awkward, and that’s exactly what he did by offering Perlman $10,000 (donated to charity) if Perlman was willing to wrestly Jim Jordan. Nothing makes sense anymore, as Ring of Fire’s Farron Cousins explains.

Well, if you spent any time on Twitter on Sunday, you know that it was a pretty weird day. One of the biggest things going on on Twitter on Sunday, aside from everybody trying to make it Barack Obama day, because it was Trump’s birthday, there was another thing going on that was far more interesting and that was the feud taking place between Republican representative, Matt Gaetz and actor Ron Perlman. Now Ron Perlman, if you don’t follow him on Twitter, I suggest you do. It’s a ton of fun. He loves dragging Republicans, like absolutely trolls the hell out of them and does really well at, you know, pissing them off and factually negating the things that they say. So it’s the best of both worlds. So anyway, yesterday he gets in an argument with Matt Gaetz and Matt Gaetz doesn’t seem to understand, doesn’t know how to separate the characters that Ron Perlman has played over the years with Perlman himself and, and Perlman had a lot of fun with that. But then it reached a point where Perlman decided to get a little personal with it.

And so he tweeted out a picture of Jim Jordan and he said, PS, you’re lucky for this guy, Matt. If it weren’t for him, you’d be the ugliest politician walking. So Perlman basically saying that Jim Jordan is the only politician uglier than you, Matt Gaetz. Well this apparently pissed off, not Matt Gaetz, not Jim Jordan, but Ted Cruz. So Ted Cruz responds to that tweet, but saying this, listen, Hellboy, you talk good game when you’ve got Hollywood makeup and stuntmen, but I’ll bet you $10,000 to the nonpolitical charity of your choice, that you couldn’t last five minutes in the wrestling ring with Jim Jordan without getting pinned. You up for it? Or does your publicist say too risky? So Ted Cruz has challenged a Hollywood actor who, by the way, if you’re not familiar with Ron Perlman, not a small guy. The kind of guy that if you ran into him on the street, you’d probably be a little scared.

Ron, Ron Perlman’s a big dude. Jim Jordan, on the other hand, doesn’t know how to put on a sports coat and you know, just because he was a wrestling coach doesn’t mean that he’s all that good at wrestling, not to mention the fact that that’s been 25 years and he’s now under investigation for his role at Ohio state. So yeah, probably not a good idea to bring that up, Ted Cruz. So if Ron Perlman were to wrestle Jim Jordan, which I wholeheartedly support, don’t get me wrong. Hell yeah, make it happen. Jim Jordan would, would probably not be able to walk away from that ever. Perlman is not a wimp. He is the kind of guy that maybe he’ll take him up on this offer. Like, that, that would be phenomenal. I, I haven’t seen yet what Jim Jordan has to say, but there’s a couple issues I want to address first and foremost, if your Senator or Congressman or whoever it is, feels like they could ever just flaunt the fact that they’ve got $10,000 to waste, probably time to replace that Senator or Congressperson. Because they clearly have too damn much money.

That was one of the first things that jumped out at me, believe it or not, that Ted Cruz has 10 grand to just throw away if he so feels the need. That’s disgusting, especially at a time when more than 40 million people have lost their jobs, Ted Cruz is flouting his $10,000 that he doesn’t care if he keeps her loses. Disgusting little pig, Ted Cruz is. The other thing that really, really sticks out from all of this is the fact that we have Republicans, multiple Republicans, all fighting against one guy on Twitter because they’re cowards. You know, we see this a lot from Republicans on Twitter. I for one have seen Matt Gaetz actually, you know, try to be a sarcastic little prick to me on Twitter. They wouldn’t do this in real life. They wouldn’t do this in person. They wouldn’t do it face to face, that’s for damn sure.

Because they know how these things would end for them face to face. They are the classical bully. You know, they are online trolls is what these Republicans are because they are the ones who talk a big game when they know that they’re safe in their houses, tweeting on their phone attacking you, you can’t get to them. You can’t see them. You’re not in their face, but these are the same people who, if they were face to face with you, they would cower down and we know Ted Cruz is that way because we’ve seen the way he interacts with Donald Trump. He’s not going after that man for implying that his father killed JFK, or calling his wife ugly. No, he sucks up to Donald Trump every single time he gets the chance because Ted Cruz is an absolute coward. A coward who just volunteered his good buddy who’s under investigation, Jim Jordan, to wrestle a very large Hollywood actor.