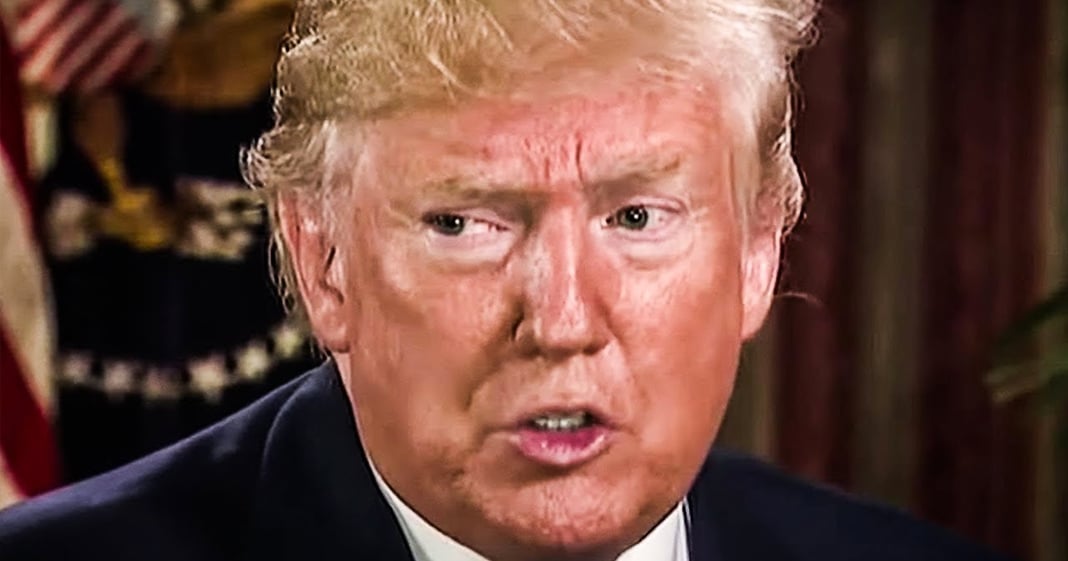 Donald Trump’s attacks on Democrats right now have reached to nearly slanderous levels, as he claims that these “far left” leaders and Party members are criminals, thugs, and worse. And as his poll numbers continue to fall, his attacks continue to get more and more intense and desperate. And that’s why this is even happening in the first place, as Ring of Fire’s Farron Cousins explains.

So Donald Trump had a very bad week and I don’t particularly care about that. If anybody deserves to have a bad week, it’s that guy, but he had a bad week because he is furious about his poll numbers. You know, there have been reports that he wants to fire Brad Parscale, his campaign manager. He wants to fire Jared Kushner because he’s blaming him for the poll numbers. He threatened to sue CNN if they didn’t retract the poll that he doesn’t like for no, like you can’t just say, hey, I don’t like this. You gotta take it away. No. And so he has gone to all sorts of different desperate measures because he’s so pissed about his poll numbers and the one he has done most publicly is borderline slandering Democrats across the country. And as the week’s gone on, as more people are aware of his poll numbers, his attacks on Democrats have just gotten more insane.

I mean, that’s really the only word you can use to describe it. Here’s how RawStory put it on Friday morning, they said Trump has labeled Democrats domestic terrorists, anarchists, Antifa, agitators and the radical left and all that was just over the span of a few hours on Thursday. Like, all of those different names and again, some of those that’s 100% slander. So hey, you can sue him for that and probably win it pretty easily. But that’s what he’s done and he’s done it because all he has left is fear. That is the only thing this man has. He doesn’t have a good solid economy to run on anymore. He let that go down the tubes. He doesn’t have his look how good I am as a leader, because we’ve all seen how he is as a leader, especially in the last two months, it’s been awful.

You, you’re really, really bad at it. Please don’t ever try it again. So what does he have to convince people to vote for him? Fear just like Richard Nixon did and that’s what a lot of people have, have obviously drawn parallels to, you know, with the big civil rights movement taking place there at the end of the sixties. There was a lot of civil unrest and Richard Nixon came along and said, listen, I’m, I’m the guy of law and order. I’m going to take things back. I’m going to make it okay. You’re going to be safe walking down the street. You’re not going to be ambushed by protesters. And all this was nonsense by the way, but that’s what Nixon sold the public and they bought it and they voted for him. Trump’s trying to do the same thing, but the world’s not the same place it was in the 1960s, early 1970s.

This country is not the same. The American public is not the same. You know, back then you didn’t really see videos of what the police were doing to protesters. Every single protestor out there didn’t exactly have a platform. You know, they couldn’t get on the news and do a segment, but they can today because they don’t need the news. They have their phones, they have YouTube, they have Twitter, Twitch, Facebook, maybe some of the real hipsters are doing it on LinkedIn. I don’t know. But the point is everybody can get their message across and the public is resonating with those messages or the messages are resonating with the public, excuse me. They believe in what the protesters are doing.

They may not always agree with the tactics, but support for the protesters is high. A majority of people support them. So Trump out there trying to say that Democrats, specifically Jay Inslee, up in Washington state, he has attacked him, said, you know, he’s allowed Antifa to take over the state. It’s just not true and the public isn’t buying it. And that is what is different today than in the late sixties, early seventies, the Nixon strategy I do not think at all is going to work. The public is different. The demographics are different. You know, back then all you had to do was scare the white people and if you scared the white people, that was enough to win you the election, it’s not anymore. We have different demographics, different proportions of the population for different races now and that’s a good thing.

And because of that, I don’t think Trump’s strategy is going to work. But if his poll numbers continue to tank, we’re going to see his attacks like this get far more desperate. The name calling is going to reach absurd levels. The accusations against these democratic governors, mayors, whoever it is, they’re going to become more unhinged, but he called them domestic terrorists. That is not true. There is no terrorism taking place. What’s taking place, whether you like it or not is people exercising their first amendment rights and if you have a problem with that, then by definition, you have a problem with the US constitution. So just keep in mind that that is what you’re fighting against when you think that these protesters need to just get out of the way or shut up, or when you say that you support the military coming in and forcibly removing them.