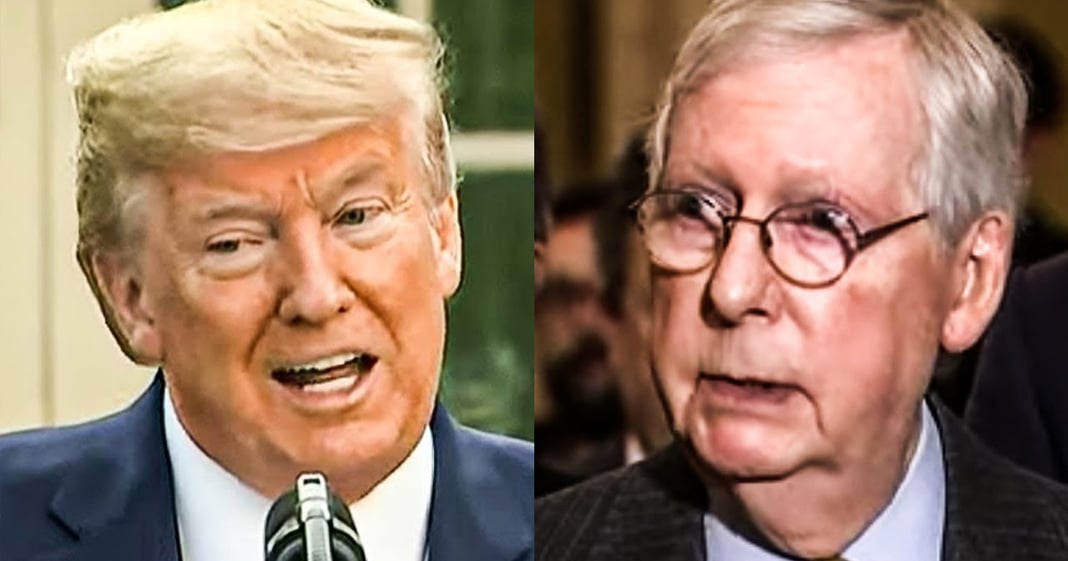 The Washington Post reported this week that some Republican lawmakers claim they feel like “prisoners” of Donald Trump because they can’t publicly go against him without getting severe backlash from both the President and their fellow Republicans. If the Party isn’t marching in lockstep then they can’t function, apparently. These Republicans want our sympathy, but the reality is that they are completely complacent in Trump’s actions, as Ring of Fire’s Farron Cousins explains.

A report came out this week from the Washington Post saying that of the half dozen or so Republican lawmakers they spoke to, they have described themselves as essentially being prisoners of Donald Trump. That is the mentality going around with these lawmakers in DC. Those who don’t quite agree with Donald Trump, they don’t necessarily like him, but oh no, we can’t go against him because then he’s going to be mad at us. Or maybe the voters are going to be mad at us. We don’t really quite know, but we know some people maybe are probably going to be mad at us and so dang it, we just gotta do what Trump wants us to do. Now here’s the thing. I have no sympathy for these people whatsoever. I don’t care that they feel like prisoners. You’re prisoners of your own making. You know, I am sick and tired of hearing these stories.

You know, for the first two and a half years of the administration, we heard all the stories of the staffers, hating their jobs working for Trump, but they, they weren’t going to leave. They couldn’t find other jobs and, oh. You chose this. You chose this. You chose to work for a madman. You chose to side with the psychopath. When you make horribly stupid decisions that you know are wrong, it’s really hard to feel bad for you. If you had no idea who Trump was or what his campaign was all about and any of that, you know, you just woke up from a coma for 10, 20 years. Sure, I could, I could forgive you there. I would have sympathy for you. But you saw how this man ran his campaign. You saw the video, you heard the things he said. So I have no sympathy for Republicans who feel like they’re prisoners, because they don’t want to piss off Trump or piss off their voters who support Trump.

Here’s the fact of the matter, none of these folks are prisoners, by the way. They may not like Donald Trump and I swear to God, I’ve said this a million times and I’ll say it a million more. They like everything Trump has done. They like everything Trump has done, even Mitt Romney, you know, the never Trumper, I’m not supporting you in 2020, you voted with him for the things he’s wanted more than 80% of the time. Like you can’t even, like, Joe Manchin doesn’t even vote with Democrats 80% of the time. And you’re sitting there saying I don’t support this man at all. I just like every single thing he’s done. That’s what it is with these Republicans. They like all of it. They’ve always wanted all of it. The deregulation, the tax cut, the overt racism.

They just don’t like the way he does it. They like the end results. They like the policy. They like the judges. They just don’t like that he’s, he’s icky with it, I guess. That’s why I feel no sympathy also. They knew what they were getting into. They know they don’t oppose the things he’s doing. They just oppose him personally because he is brash. He is abrasive and he’s disgusting, but they refuse to go against him. And as, as the Washington Post points out, they actually talked to Brendan Buck who spent, in the past worked for former GOP house speakers, Paul Ryan and John Boehner, Brendan Buck said, quote, I continue to believe that there’s really no political upside to running away from Trump. You gain nothing and you raise the ire of not just the president, but people who support him and see that’s right. Because people already know what the Republicans are all about.

You know, those independent voters, the moderate voters, and even the democratic voters who are, you know, more right than left, they’re not going to come to your side because you’ve all been exposed. So yeah, technically you gain nothing except a couple of nice headlines for a couple of days on liberal websites and I am sick of hearing about that. I mean, we saw it happen earlier this week with, oh, George Bush says he’s not supporting Donald Trump and then two days later, after all the good positive headlines about him came out, the story came out, oh, well, that’s actually not exactly what he said. He said, he didn’t say that and then his nephew came out and said, we are supporting Trump. So I’m glad I called that right, by the way. In a video I did, I said, stop praising these people. They, they’re not, they’re not saying they support your guy. They’re going to end up voting for Trump. I told you, nevertheless, don’t feel sympathy for these people. Don’t praise these people. They love everything he does. They just don’t always like the way that he does it. But at the end of the day, they’re all 100% the same and don’t ever forget that.