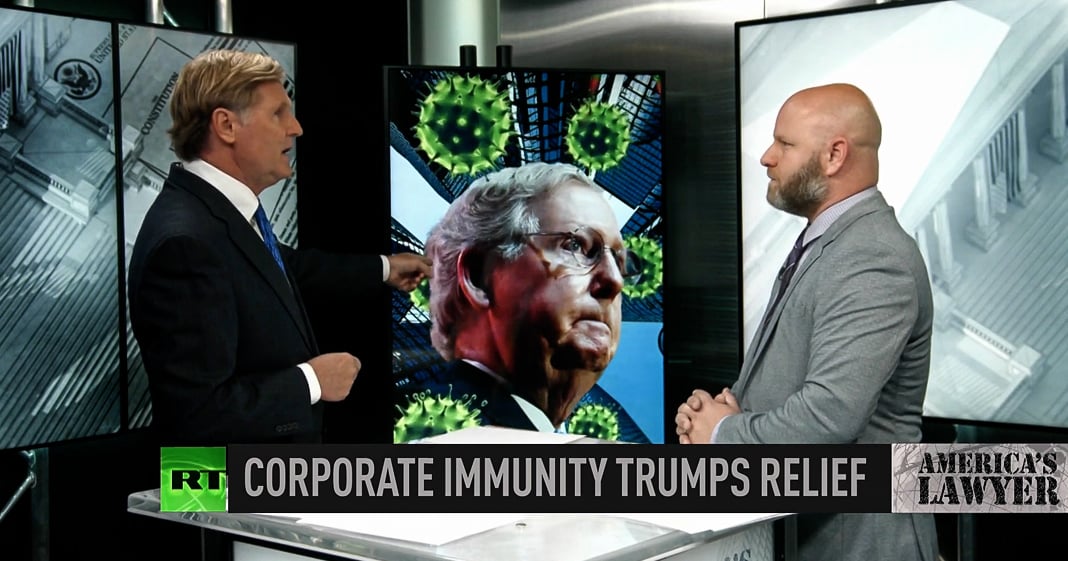 Mike Papantonio: Senate majority Mitch McConnell is still trying to give corporations immunity from the coronavirus lawsuit. This story is so ugly and here’s why, the US chamber of commerce came in. They, every time there’s, every time there’s an emergency kind of situation in the United States these freaks, these, these greedy freaks from the US chamber of commerce, who, by the way, they’re not mom and pop. They’re 19 or 20 of the largest corporations in the world. So they pile on. ALEC, ALEC is another organization that piles on. They pile on and they try to get the turtle man here to, to basically give corporations almost total tort immunity, no matter how bad the conduct is relating to whether they make the workplace safe for the worker. Pick it up from there.

Farron Cousins: Right, you know, Mitch McConnell has long been a friend, a good ally of both the chamber of commerce, of ALEC, and he is out there pushing their agenda right now, which is complete corporate immunity from any kind of coronavirus related lawsuits. He has personally said, McConnell has, there will not be another relief bill if it does not have this immunity and to their credit, the Democrats said, okay, we’ll think about it. We, we’re not closed off to it. So this could be easily a bipartisan, you know, effort to hurt consumers.

Mike Papantonio: The Democrats are in line for it.

Mike Papantonio: There’s no red. When, when Nancy Pelosi says that, she says, I’m probably going to go along with them. And so to talk about what this means, they put in place immunity no matter how bad the conduct is of the corporation. The corporation may know that coronavirus is all over the premises.

Mike Papantonio: Smithfield is a great example. People died left and right. People, people were contaminated left and right at Smithfield. The folks then left work, took it home to their families and ordinarily you would have a lawsuit that would, that would extend all the way to the workplace. Not anymore. Now here’s where it really gets ugly. They want that then to extend beyond the coronavirus. Turtle man here, it, you know, if there’s anybody in American politics that we should be worried about, it’s this guy. He is the most insidious character in Washington, DC right now. And he’s wholly owned by the US chamber of commerce and ALEC.

Farron Cousins: Well, you know, and you pointed out something great here. It’s never just about what they say it’s just about. When we’re looking right now with this administration, the EPA says, we’re not going to enforce any regulations. We’re cutting back surveillance or, or, or enforcement, excuse me, still thinking of the other thing we were talking about, but we’re cutting back enforcement just so we can kickstart the economy. And what they’re going to see is once people start building and the infrastructure, they’ll say, well, that works so well. Let’s just keep it.

Farron Cousins: Let’s just keep it. Let’s let’s make it, take it further and that’s what he’ll do with this. Everything is always a test to see how much further they can push it. That’s what this is.

Mike Papantonio: Well, for example, they’re working now with electric cars and automobile self driving cars. Turtle man has all, he’s already sneaking in stuff to not benefit, he doesn’t want to benefit the industry. He wants to benefit the corporate whores that he works for. That’s what he wants to do. And so, so what he’s doing is building little bills around the idea that if you, if you’re run down by a truck that’s self-driving, sorry, there’s immunity here. And so, so this starts taking with a little seed and then before you know it, turtle man here has expanded it well beyond that. This is a dangerous little guy.

Mike Papantonio: And why they can’t get rid of him is, is a mystery to me.