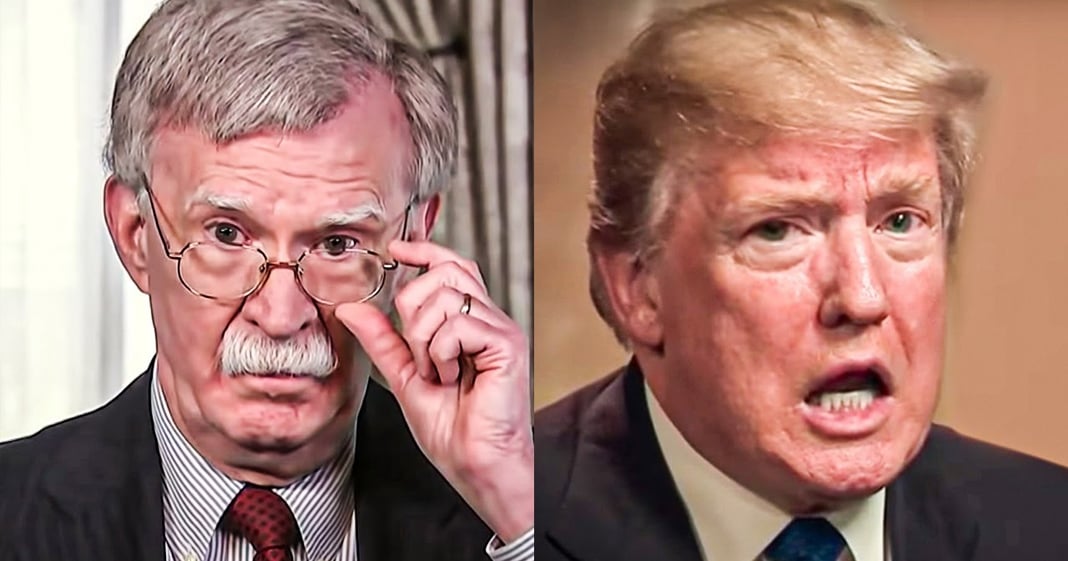 Former Trump National Security Advisor John Bolton is getting ready to release his new book, and according to reports, he makes the claim that Trump engaged in illegal or improper conduct with other countries, not just with Ukraine. This explosive allegation is important, but only if the next administration decides to act on it. And that’s where it either means everything…or nothing at all. Ring of Fire’s Farron Cousins discusses this.

According to sources who have actually seen John Bolton’s new book that has been delayed, but it’s going to be coming out soon. According to the people who’ve seen it who have now spoken to Axios, Bolton, Donald Trump’s former national security advisor makes the claim that it wasn’t just Ukraine that Donald Trump acted inappropriate borderline illegally with and that there are likely instances that are described in the book, that show that Donald Trump likely broke the law with other countries as well. That’s a big claim and that’s a pretty shocking claim too. Right? Implicating the president in further criminal activity. Unfortunately the sources who have allegedly seen this book, they did not elaborate any more than what I just told you. We don’t know which countries. We don’t know what kind of activities they engaged in. We don’t know what Trump said to them, what he withheld or didn’t withhold or threatened to withhold.

We don’t know any of that. All we know is that John Bolton has allegedly included these in his book. We also do know that aides inside the white house are terrified of the release of this book because as they described, John Bolton kept very detailed notes about everything. The guy always had one of those big yellow legal pads with him taking notes of everything, had stacks of them. So they’re worried about that. So don’t necessarily have any reason to doubt any claim that Bolton makes in the book. The question is, is he going to make these claims in the book? In fact, you know what? That’s not even the question because that question doesn’t matter at all. We’ll find out when the book comes out and I’m sure all of this is probably just to generate some press for him so he can get some good pre-sales, right?

Be on that best-seller list before it even comes out. The question is, what’s going to be done about any of this as if in fact he does make these claims? And I know a lot of people would immediately assume, well, hey, wouldn’t the next administration just investigate them? You know what, we thought that with Obama, right? Because we had memos. We had pictures. We had every possible thing needed to prosecute members of the former Bush administration for violating the Geneva conventions for violating the military’s own rules against torture. We had it all. We had all of the evidence ready to go. We could have started prosecutions on day one, but Obama announced that he wanted to look forward, not backward. So we were just going to ignore all of the crimes of the Bush administration and yes, they were crimes both national and international crimes, by the way, we’re going to ignore it. We’re going to look forward, not backward, those were his exact words.

So, no, we can’t guarantee that if Joe Biden wins in November, that he’s going to have the DOJ investigate these claims that Bolton may or may not be making in his book, folks. And here’s the reason for that and this is a theory I have, right, okay. This isn’t, you know, based on any hard evidence. But I think at this point, every president does things that they could probably get in trouble for. You know, not like it’s some horrible thing, but they have to make horrible decisions sometimes. And I think every new president that comes into office understands that and that is why we don’t actually see these big investigations into real things that are prosecutable. Maybe I’m wrong, maybe I’m not. But I feel like there’s this unspoken code from president to president saying, hey, don’t worry.

We’re moving forward. I know you did some things. I’m probably going to do some things. We’re all good here. Thanks, leave your key at the door. I really do think that there is some kind of, you know, unspoken code that, hey, we’re not gonna go after the guy before us. We’re not gonna go after the guy before us, all that, but we’ll say. But if Bolton implicates the president in more criminal activity, then yes, something needs to happen. And we clearly can’t trust the president to comply with subpoenas. We can’t trust him to do anything like that. So we have to hope that I’m wrong about there being some unspoken agreement between presidents, otherwise, any claim Bolton makes is just going to make it basically sell more books, but result in absolutely nothing for those who perpetrated these alleged crimes.