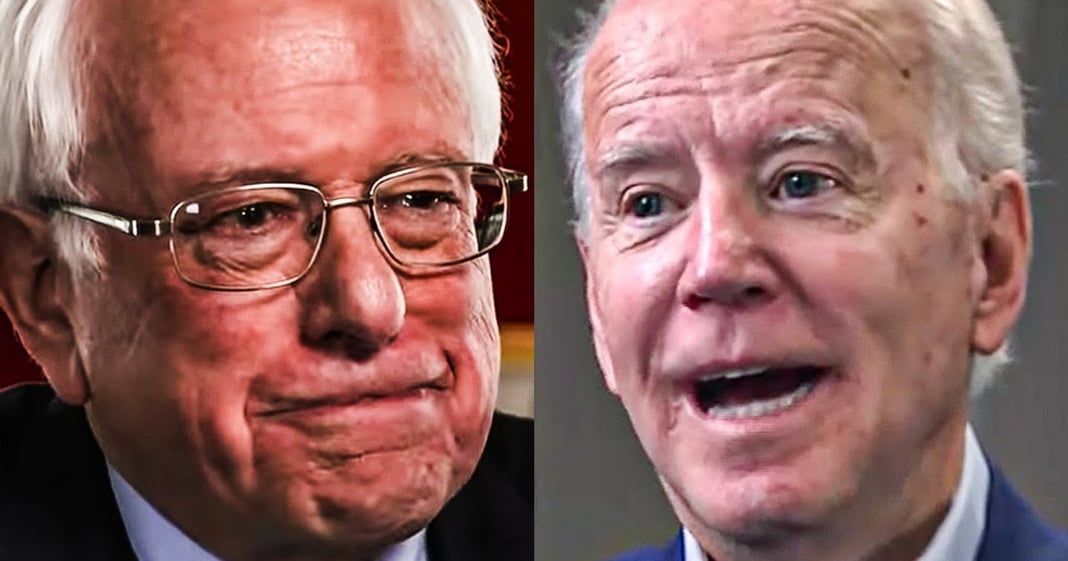 Bernie Sanders has been spending a lot of time talking with Joe Biden, and this week Sanders said that Joe is definitely open to being pushed further to the left. That’s a nice thought, but Joe’s own statements have already contradicted this point. Maybe Joe can be pushed to be more progressive, and we can’t ever stop trying, but there could be something else behind Bernie’s claims, as Ring of Fire’s Farron Cousins explains.

In an interview with the New Yorker this week, Senator Bernie Sanders said that Joe Biden might be a little bit more receptive to moving to the left than, you know, the last person to secure the democratic nomination. And the reason for that is because Bernie says, you know, he has a much better relationship, a much closer relationship with Biden. The two have been talking a lot, obviously, as we saw recently, Biden created, or Biden and Bernie, excuse me, the, the mjoint task force to do progressive things and, you know, AOC is going to help with the environmental stuff and some progressive thought this was great. Other progressive thought, the whole thing was a sham. And the truth is probably somewhere in the middle. Obviously they need this for show, right? Because you’re not going to get any progressive votes if you don’t at least pretend that you’re going to move a little to the left.

And I think at the same time, they’ve realized, okay, well, we’ve got the nomination now. We don’t have to worry about the moderate Democrats. Maybe we can move a little bit to the left on some of these issues. So I do think it is a combination of both and to a degree, I believe that Bernie Sanders is correct. I think any politician, if you push them hard enough can be pushed in any direction and, and that’s, that’s the terrifying thing because we can push them where we want them to be, where we need them to be for the future of this country. Sure. But the corporate money can also come in and push them to the right. When something is pliable, it’s pliable in any direction, not just to go to the left and I think Bernie missed that. But the one thing I do think Bernie hit on the head in this New Yorker interview was this.

When he said, quote, it’s not good enough just to elect Joe Biden, we’ve got to continue the movement in this country for transformative change and to understand that we are way, way, way behind many other industrialized countries in providing for the needs of working families. And that is something we have said for a long time here. It is not just enough to get a Democrat in power, you know, to have more Democrats than Republicans. That’s not enough. At this point, that’s not even good. Quality matters, you know, but, but if you ask the DNC, no, no, no, no. It’s all about the quantity. We want to have more Democrats than Republicans and way, if we do that, as long as we do that, we’ve won. End of story. Game over. We’re dumping the bucket of Kool, Gatorade over us. Koolaid actually probably would have been a more apt Freudian slip there, but anyway.

No! Quality matters because if you elect a bunch of Democrats who were sitting right there in the middle of the corporate fence, taking all the corporate money, you know, maybe saying a couple of good things about social issues, but not really doing anything about them. How is that good? How is that a victory? How is that a win? But we have had too many years, too many elections of that. So Bernie is right. It’s not enough to just have a Democrat there. It has to be somebody with courage, somebody with a vision, somebody with passion and fire. And we don’t see enough of that these days. You know, we we’ve got AOC and I think that’s why she terrifies the Republicans so much. I think that’s why Ilhan Omar terrifies Republicans and Rashida Tlaib and Ayanna Pressley.

That’s why the whole squad terrifies Republicans, because these are smart women who know what they want. They are not afraid. They do not back down and they’re not afraid to be heard. That terrifies Republicans and that’s what we need more of. We need more Ro Khannas we need more Ted Lieus and I know Lieu is a little more corporate than some of the other folks, but he’s also pretty dang good. We need more Ed Markeys and fewer Joe Kennedys and we might lose one for the future political career of the other. That’s sad. That’s depressing. Government has to be better. If we’re not pushing for better candidates who actually want to help us, then it’s no different than just team sports.