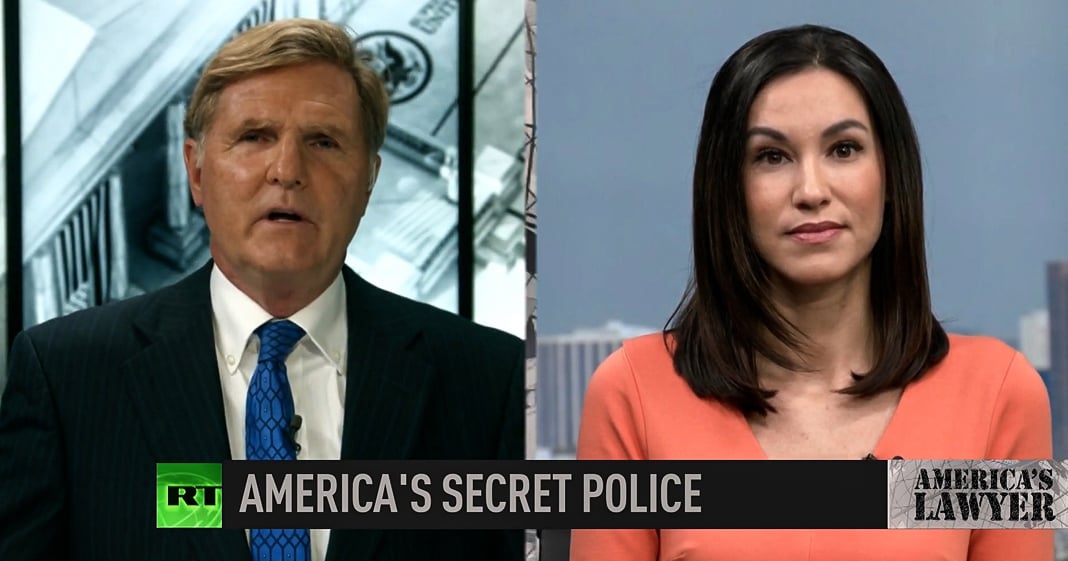 Via America’s Lawyer: Mike Papantonio is joined by RT correspondent Brigida Santos who investigates reports of unidentified officers arresting protesters. Just who are these so-called federal agents working for?

Mike Papantonio: Dozens of unidentifiable, heavily armed law enforcement officials have been spotted at protests across the country over the past two weeks. RT’s Brigida Santos joins me to talk about who are they, what’s going on? Is this America’s new secret police? Brigida, lay this story out. This is a remarkable story.

Brigida Santos: I mean, it’s absolutely crazy. Now heavily armed men were spotted at protests in Washington, DC, following the police killing of George Floyd. The men were in uniform, but they had no identifiable badges or department markings. When reporters asked them to identify themselves, they then refused to answer. Now, according to attorney general, William Barr, the federal officials came from the Bureau of prisons special operations response teams, which had summoned to monitor the unrest. Unlike members of the military, federal law enforcement officers are not required to wear identifiable uniforms. But their presence confused demonstrators and members of the media who were not sure whether the men were actually real law enforcement officers or just guys wearing costumes. Law enforcement experts criticized the decision to send unidentifiable feds to monitor crowds, calling the move very concerning. By deploying secret police to the streets, citizens have no way to identify officers who engage in misconduct while representing the federal government.

Mike Papantonio: Yeah, police and other departments around the country have also been, been hiding their badges. Where’s this happened and why is it happening? What’s your take?

Brigida Santos: Well videos from recent protests show officer’s covering their badge numbers and names with black bands, which police say is a mourning ritual to honor fallen officers. But many police departments don’t allow officers to intentionally hide identifying information. So when these officers were asked, why they’d covered their badges, they often said it was an accident. They claimed that the mourning badges had slipped or their mourning bands had slipped, but many officers were also spotted with tape covering their badges and others had removed their badges altogether. Now this was not an isolated problem. You can see videos of this happening, from officers in New York, Seattle and Chicago, to name a few cities. This made it nearly impossible for protesters to identify those officers who attacked to them, while they were peacefully protesting as we saw the video after video of over the last two weeks.

Mike Papantonio: You know, a disturbing incident at the protest in San Diego last week has gone viral. The video shows a group of men pushing a woman into an unmarked car and driving off. Who were these people?

Brigida Santos: Well, apparently they were officers. Now. They were dressed in plain clothes and military style uniforms with no identifying markers. They were caught on video, arresting a female protester and hauling her away in an unmarked van as her friends screamed at the men to identify themselves, take a look.

Brigida Santos: As you heard there, the unmarked officers are then shown yelling at the woman’s friends, “If you follow us, you will get shot. Do you understand me?” This is incredibly frightening and it really looks like a kidnapping because there’s absolutely no way to know whether these undercover police are legitimate law enforcement officers. They don’t identify themselves when they’re asked to. They don’t show their badges for all this woman’s friends knew that could have been a random group of agitators hollering, hauling her off until the end of time. And once that video went viral, San Diego officials looked into it. They found the officers who said that they arrested her for allegedly swinging a cardboard sign at a passing officer on a motorcycle. But this is very disturbing. This is one of the reasons why people are protesting against police currently.

Mike Papantonio: Brigida, thanks for joining me. Please keep up with these stories. As a matter of fact, if we can do an update next week, I’d like to do it. Let’s dig a little deeper into the story. Okay. It sounds like, it almost sounds like a federal secret police, a state secret. This is not something you would want occurring in the U.S. Thank you for joining me. Okay.