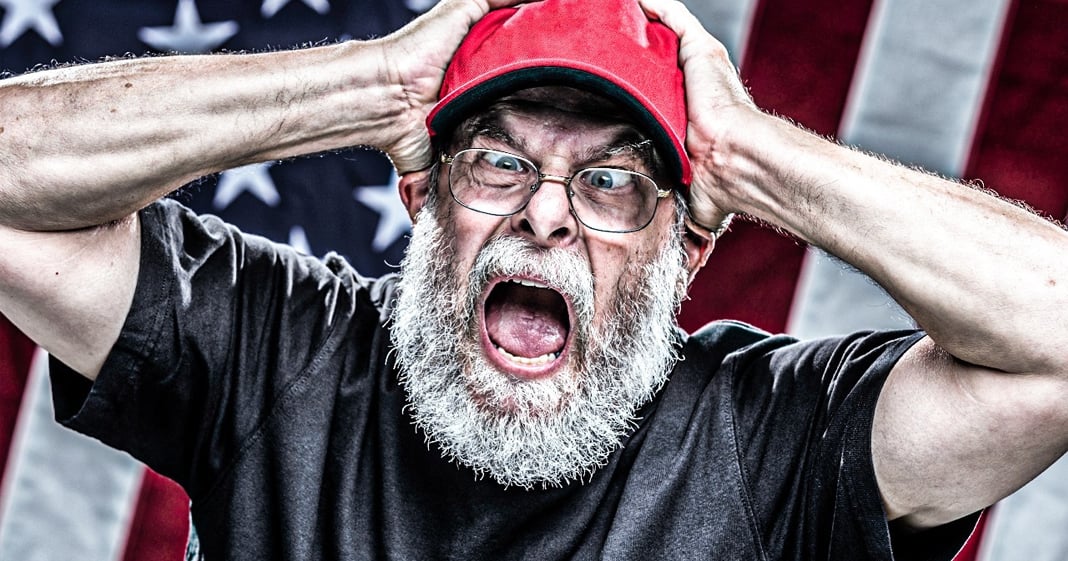 The Republican Party is currently building an “army” of roughly 50,000 volunteers who will have the job of intimidating voters during the election in November. These “poll watchers” will be located primarily in swing states – specifically, areas of high minority populations in swing states – to threaten people with jail or fines if they vote illegally. Just the presence of these poll watchers has the effect of making people stay home, and that’s exactly the point. Ring of Fire’s Farron Cousins discusses this.

The Republican party is close to their goal of finding 50,000 volunteers who are going to go around in November to intimidate people in an effort to get them to not cast a ballot in the election this year. Now the Republican party is obviously not framing it that way. They’re framing it as we need 50,000 poll watchers because of all the damn voter fraud in this country. Even though we can’t find examples of voting fraud, dang it, we’re sure it’s out there and you our 50,000 members strong army, you’re the front lines. In reality folks, if you’re a part of the 50,000, you’re not the frontline, you’re the pawns. You’re the people that the Republicans want to go out there and volunteer, of course, because they can’t pay you because then you run into all kinds of legal problems, but nonetheless, they want you to go out there and be the pawns.

So that way, if you get in trouble, then you’re on your own. Hey, you don’t work for us. Right? You went out there acting like a jackass all, all on your own doing. And that’s one of the reasons that they want these 50,000 people to be volunteers is so that, you know, they can keep their distance when they do get in trouble because most of what they’re doing is illegal, but in some States that’s not. And unfortunately, most of those States where it’s not illegal, those happen to be swing States and that is where the Republican party has said that they are going to focus their 50,000 member army, 15 different swing States to be exact. And we can pretty much expect that they’re going to be in majority minority districts, because that is what historically has happened in every other election where Republicans have sent out their poll watchers to root out this nonexistent voter fraud.

Here’s how this works. They send the poll watcher out there and because of the way the law works, the poll watcher is allowed to go up to the officials in that precinct and say, hold the hell up. I think this dude, I think he’s voting illegally. I challenge his ballot. By doing that, it immediately puts a review on that person’s ballot and if that person maybe doesn’t have the exact ID on them that they need, even if they’re not like in a voter ID state, they could invalidate the ballot right there and there, boom, there goes one vote lost. But see, that is a rare, rare case of a thing that happens that somebody doesn’t have the needed paperwork on them to prove they’re eligible. What is far more common is you have these people who go around and they threaten, they harass and they try to intimidate people to leave the line before they even vote.

They try to cause a scene. They challenge as many ballots as they can to create a backlog of people. Hoping some people will see what’s happening, say, you know what, I don’t want to get involved in that. I’m just not going to vote. It’s one vote. What does that matter? Well, when you have 100 to 200 people per polling place, start to do that, yeah, it adds up quick and that can easily flip an election and the Republican party knows that. And that’s why they’re doing it and that’s why they’ve been doing this exact same thing for decades now, folks, decades. They’ve been sending out these so called poll watchers to monitor for fraud when really they’re the fraud. I mean, we found it. It’s you, look in the mirror, you’re the one suppressing the vote. You’re the one acting pretty much outside the law here. Not the people casting their ballots.

But again, because of our ass backwards laws in this country with regards to voting this, isn’t always entirely illegal. Sure, certain things are, but certain things aren’t, and it depends on your jurisdiction and, you know, the leanings of your courts locally. So anything could happen. The point is don’t be intimidated. Don’t let them get to you. Don’t engage with them at all, by any stretch of the imagination. If they walk up to you and say, are you legal? Are you a former felon? Are you this, that or the other thing? Don’t answer call an election protection hotline and we will be sharing those numbers with you as the election approaches, we’ll be showing them all throughout election day. We’ve got five months, that will be available, but don’t under any circumstances, engage with these poll watchers for any reason. That is exactly what they want. So do not give them that satisfaction.