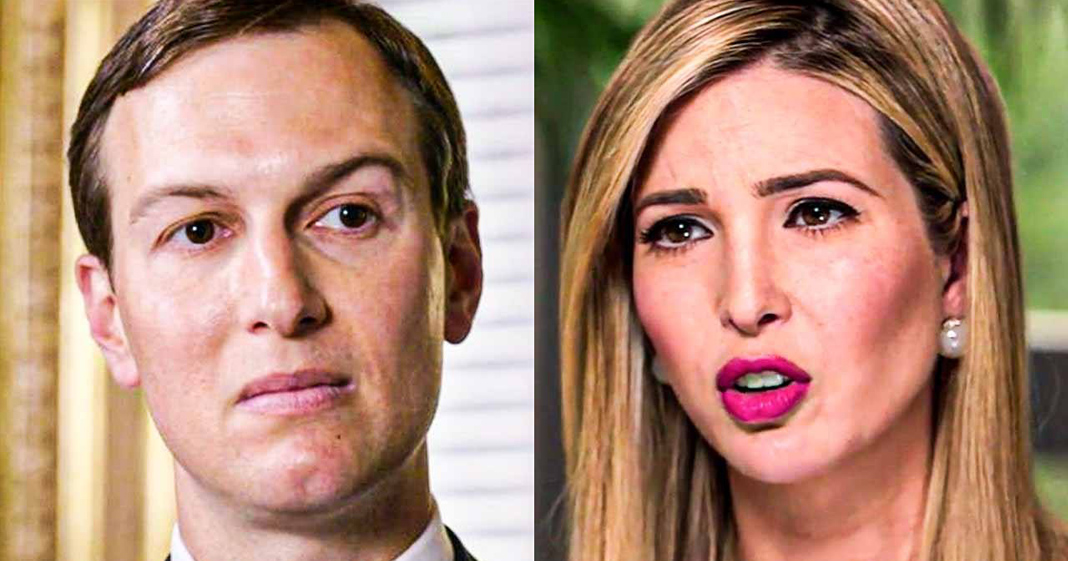 According to reports, New York’s high society crowd isn’t going to welcome Jared Kushner and Ivanka Trump back into their lives with open arms once those two leave Washington, D.C. Their actions in the administration could leave them with no friends, no party invitations, and absolutely no one to talk to except each other. Or so the reports would have you believe, but Ring of Fire’s Farron Cousins explains why these reports are completely bogus.

You know, there was a story this week, the headline absolutely caught my attention. I immediately clicked on it and as I’m reading the article, this wasn’t in the article, but I realized that I fell for it. I absolutely got conned as did you most likely, unfortunately, clicking on this video. Now let me explain. The story, which I found from raw story, but it was re posted from elsewhere, said Jared and Ivanka can expect to be shunned by Manhattan after taking part in Trump’s national atrocities, report. And this is because the daily beast put out a report, the reporter had gone and talked to some wealthy socialites in New York city, and they were appalled at what Jared Kushner and Ivanka Trump have done and green-lighted, and actually supported as members of the Trump administration. And this includes, as the report said, there’s been Charlottesville, kids in cages, the Muslim ban, the numerous rollbacks of many civil rights impacting people of color, women and the LGBTQ community.

The affront of the moment is the disinterest of the president in protecting the first amendment rights of hundreds of thousands of Americans protesting law enforcement’s brutal treatment of African Americans and blah, blah, blah, and all of that, right, like they’ve engaged in all of this horrible behavior and we know about that. Like we get it, Jared and Ivanka have been there, right there with the president. It was Ivanka’s idea along with Hope Hicks to go do that photo op in front of st. John’s Episcopal church last week that led to the gassing of protesters that has really, really come back to bite Donald Trump in the ass. And the reporter, as I mentioned, spoke to all these, you know, New York high society types, and they expressed frustration and anger over what Jared and Ivanka have done. And the reporter also pointed out that many of Ivanka’s former friends from New York have called her out on social media.

And based on these two things, a couple of conversations with some influencers in New York and seeing Ivanka’s former friends call her out on social media, the reporter concluded that Jared and Ivanka will not be welcomed back into high society in New York after they leave the Trump administration and they will in fact be shunned. And of course that makes for a great headline. Everybody loves to read about Jared and Ivanka being shunned, screwing up, people disliking them. I mean, look, you know, the videos we put up, if we do something on Jared or Ivanka, it’s going to get a lot of views and the people who wrote this article knew that exactly and that’s why they wrote it. And sure, everything they’ve said is true with regards to the atrocities that Jared and Ivanka had been involved in. There is no question about that. What they’re wrong about is the fact that these high society types are going to shun these two assholes because they’re not, you want to know how I know.

Because I think he was, what about a year ago, there was this dude in New York, I don’t know if you’ve heard of him, but his name is Jeffrey Epstein or was Jeffrey Epstein. Now you see Jeffrey Epstein had spent some time in jail on a very lenient sentence for bringing underage girls over to the United States and of course to his little private Island in his airplane, the Lolita express, where he would then have sex with them and they would be made to have sex with other people, including some very important people here in the United States. Now Jeffrey Epstein, the noted pedophile, convicted pedophile, as I mentioned his time in prison, then he was moved up to New York where in New York, he was not rejected by the high society of New York. Instead he would throw lavish parties and he would bring in big wigs from Hollywood, big wigs from the news media and the political news media, former and current politicians, wall street traders, wealthy scientists, like every frickin kind of person you could imagine who knew what this guy had done, why he spent time in prison, what his little sexual perversions were, but they still looked at that and said, yeah, but he’s got money.

I’m gonna hangout with him and that’s why Jared and Ivanka are not going to be shunned. And if they are shunned, it’s going to last a couple weeks because at the end of the day, these two jerks still have money and that is all that these New York high society folks care about. You got money you’re in the club. Oh, you were okay with kids in cages. Oh, you’re okay with taking away LGBTQ rights. But you got money, so come on back into the club. That’s how the club works folks, and that’s one of the reasons there’s a lot of anger in this country at that club, that 1% club, because it doesn’t matter what these people do. They can fly in women from all over the world to be their underage sex slaves, or they could just be complicit in the actions of the worst administration in our lifetime. Doesn’t matter. If you have the money, you’re always welcome in the club. Jared and Ivanka have nothing to worry about. Unless of course they go bankrupt. Then, you know, at that point, they’re out of the club, the odds of that happening though, little slim and I don’t think Jared and Ivanka are worried one bit.