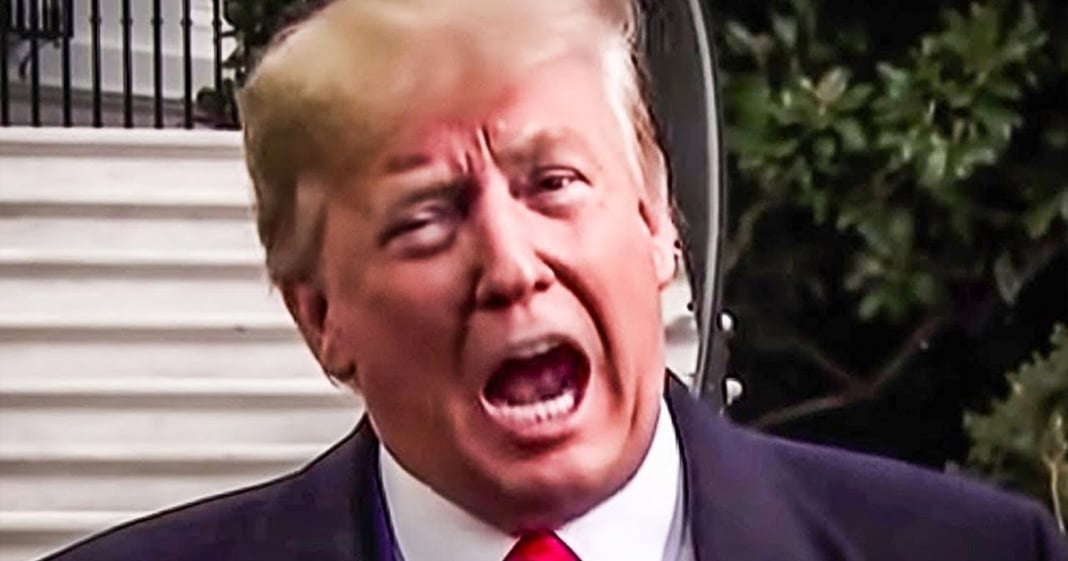 According to reports, Donald Trump is furious with campaign manager Brad Parscale and the way he is running his campaign and he’s contemplating firing everyone and replacing them all with people who know how to win. Parscale has been a little too arrogant in both his abilities and his execution, and his campaigns have served to drive more people away than to bring in new supporters. Ring of Fire’s Farron Cousins explains what’s happening.

According to a report in Politico this week, Donald Trump is getting increasingly nervous about the 2020 presidential election and as is often the case, Donald Trump is really, really bad at processing his own emotions. So his nervousness has now turned into anger and that anger is being directed as we have reported in recent weeks at his campaign staff, the 2020 reelection campaign staff. For the last few weeks, Donald Trump has been getting increasingly increasingly, excuse me, angry over the poll numbers, showing Joe Biden absolutely mopping the floor with him, not just nationally, but in swing States, in red States, States across the country that Joe Biden has no business winning, but he’s winning. And Trump is freaking out about this and as we have reported reports have said, Trump has contradicted it, but, it has been reported that Trump has lashed out at Brad Parscale over these polls.

He has now hired, by the way, his own independent polling company to feed him good numbers, because he’s so angry at all the bad news. So he literally hired a polling company, like only tell me good news. That’s a really, really bad strategy, by the way. I’m glad you’re doing it because you’re an idiot and you deserve it. But wouldn’t you want the company to tell you the truth so that you know what to fix? Anyway, he thinks he does know what to fix and Trump wants to purge his reelection campaign and bring back in people from 2016 or bring in people who worked on other successful campaigns over the years, possibly including Karl Rove. So that would be one of the worst things imaginable. But at this point, I don’t think it’s going to do any good. A lot of damage that’s been done to Trump in terms of reelection has come actually from Brad Parscale his campaign manager himself.

Parscale is out there one, pulling in lots of money and really just ripping off the Trump campaign. Now, again, I love to see it. I’m not going to complain about it, but there’s also no question whatsoever that Brad Parscale is using this as an excuse to just bilk the campaign for money. He’s buying luxury cars and just kind of cruising around thinking he’s hot stuff. But yeah, Trump, he is, you know, essentially stealing money from you and giving you nothing in return, except a lot of arrogance because that’s what Parscale reeks of in his campaign work. You know, the, the things he has put out, the things he says on Twitter, it’s all arrogance and there’s very few people in this country that are actually attracted to arrogance, whether it’s with a potential significant other or with political campaign, we don’t want arrogance.

Especially at this point in American history. We’re in the middle of a pandemic. We’re in the middle of a revolution taking place over racial inequalities, a revolution that is long overdue and you think arrogance, you think talking about the stock market kicking ass is going to be a good idea right now. Nope, but that’s what you are doing. Trump. That’s what Brad Parscale is doing and it’s turning people off left and right. But Trump can only blame people. He can’t change himself and yes, that is backwards. It should be the other way around. He should first look in the mirror and say, you know what, I’m the problem. The way I am with X, Y, or Z is what’s bad. I will change that. I will seek help on this issue and I will make the people like me by being a good person. But instead he wants to fire everybody and as a, this political report says, Parscale and Kushner for the last couple of months now have been firing lots of people off the campaign and replacing them.

These replacements are very clearly not working out because the numbers aren’t changing. And so they’re being fired again and replaced. But Trump has now kind of focused in at the top. Parscale maybe Kushner, we don’t know, but honestly that’s where the rot comes from. If I was looking at this totally objectively without all of the hatred that I have for Trump and Kushner and Parscale and all those people, if I’m just looking at this as an independent thinking brain. Yeah, fire Parscale and Kushner immediately, and also have Parscale investigated for what he’s doing with your campaign money, because he’s funneling it through several different little entities that he has created. That doesn’t seem right, bud. So really, objective thinking. That’s what it is. Your campaign sucks because you suck, you want people to like you do something worth liking and I think the top of the list would be firing Jared Kushner publicly because everybody hates him. And you want to get some people on your side. Yeah. A good public firing, after all, it’s pretty much what you’re known for. Try it again. See where that gets you.