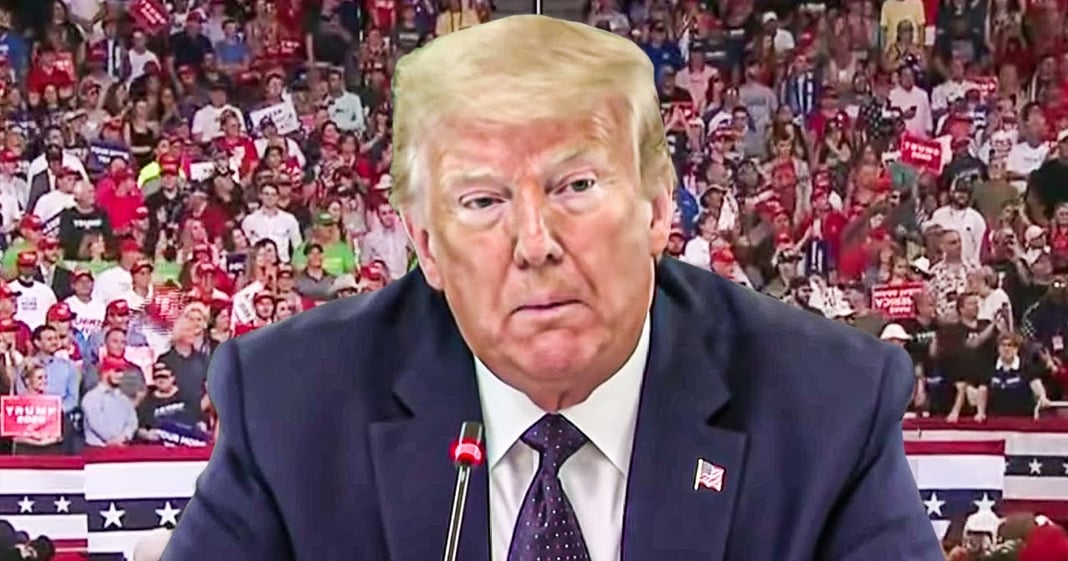 Donald Trump is planning on resuming his rallies in just a few weeks, but he doesn’t want his supporters to get angry when they get sick. In order to escape liability, Trump is making all of his supporters virtually sign documents saying that they will not sue if they get sick at one of his events, a clear sign that people are going to get sick. Ring of Fire’s Farron Cousins explains what’s happening.

Next Friday, one week from today, Donald Trump is getting back out there on the campaign trail and holding a rally in Tulsa, Oklahoma, on June 19th, which also happens to be Juneteenth, which is freedom day. The celebration of the anniversary of the emancipation of all enslaved Africans here in the United States, you know, way, way back when. That’s what that is. That that is a very important day and Trump has chosen that day to get back out there and hold one of his hate rallies, because that is exactly what’s going to happen. Considering what is happening in this country today, next Friday’s rally will be nothing more than a slightly more sanitized version of a Klan rally. That’s what we can look forward to. What we can also look forward to, by the way, is an increase in cases of, in Oklahoma, of coronavirus.

And that’s not just me saying that. That’s not just science saying that. That’s actually the Trump campaign itself warning us that, hey, this is going to happen. Oh, and by the way, you have to agree to not sue us if you want to get tickets to the rally. You have to buy your tickets online, obviously, and so when you go online to buy your tickets for Donald Trump’s latest hate rally, here’s the disclaimer on there. By clicking register below, you are acknowledging that an inherent risk of exposure to COVID-19 exists in any public place where people are present. By attending the Rally and that’s capitalized. That’s, that’s weird. You and any guests voluntarily assume all risks related to exposure to COVID-19 and agreed not to hold Donald J. Trump for president inc., the bank of Oklahoma center, ASM global, or any of their affiliates, directors, officers, employees, agents, contractors, or volunteers liable for any illness or injury.

Now here’s the thing, folks, this is kind of the standard disclaimer. You, you know, you see this at a water park, you see this in any kind of venue. Hey, if you get, if something happens to you, you can’t sue us. Guess what? Most of the time, most of the time, not all the time, but most of the time, these actually don’t hold up in court. It’s a little too generic. You cannot guarantee that the person did in fact go through it. There’s nothing legally binding there, so it’s okay. You might still be able to sue them. But reality is you shouldn’t ever come to that point. You need to understand that risking your health and the health of every person you love, is that worth going and seeing Donald Trump’s stumbling through, you know, a hate-filled speech for 60 minutes? If you say yes, then by God, go to that rally, go to that rally and hug as many people as you can.

And if somebody coughs, go walk right into the line of that cough, because that’s what you should do if you think the health of everyone you care about is worth less than watching Donald Trump talk for an hour. But for those of you who think rationally, those of you who aren’t crazy, you have to understand that this risk is not worth the reward at all by any stretch of the imagination. But the reason the president is even willing to put you in this position one, is because he doesn’t care about you, you’re expendable, he doesn’t care if you live or die. But two, his support is tanking and this is the only thing he knows how to do. He’s thinks that these rallies are going to go out there and help him pull his support back. And to that, I asked, did it work in 2018? Wasn’t, wasn’t 2018 the election where Republicans retained control of the house of representatives and they increase their margins and, it was the red wave is what they called it. Right? That’s a thing that happened. Oh no, I’m sorry.

None of that materialized, even though Donald Trump was doing rallies, like every couple of days at that point. Democrats won Trump backed candidates lost at a higher rate than non-Trump backed candidates on the Republican side. You were a disaster because everybody hated you and that’s what the poll numbers are telling you now. So if you go out there and you do these rallies, not only are you going to get people killed from corona virus, that’s going to happen. Make no mistake because we’re still in the middle of a pandemic, a pandemic that by the way, folks, it’s getting worse just because you’re not paying attention to it doesn’t mean it’s not getting worse. It is getting worse. People will go to these rallies. The virus will spread like wildfire. Some of these people will die from the virus. People are going to die because they had to see Donald Trump talk for an hour. That’s insanity.

I don’t care if it was a Democrat and Democrats are doing this, I would still call it insanity and call anyone who attended stupid. This makes no sense. Can we please not do this? But Trump is willing to throw you under your bus, under the bus, the life of everyone you know under the bus, because you may be asymptomatic, but you could take this thing home to your kids and you could kill your kids because you wanted to see Trump. You could kill your parents because you wanted to see Trump or your neighbors or your coworkers or whoever it is. Is it worth it? Is it worth it? Honestly, look yourself in the mirror, ask yourself that question and then without breaking eye contact, answer it. And that’s going to tell you a lot about the kind of human being you are.