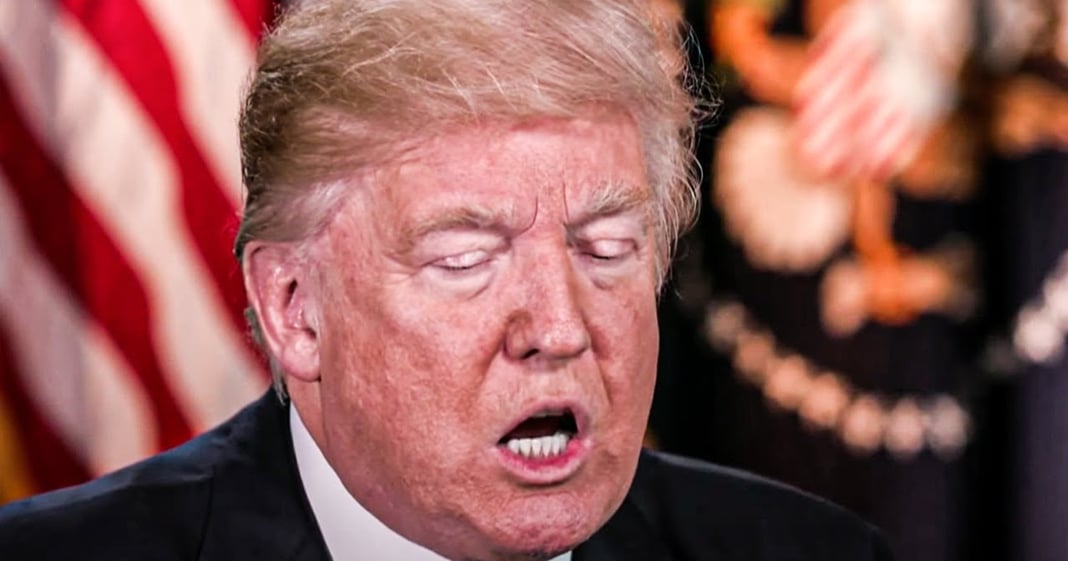 Republican Senators up for reelection this year are starting to ramp up their ad campaigns, and most of these ads share a common theme – there’s absolutely no mention of Donald Trump. No Trump imagery, no Trump talking points, and no mention of the man or his administration himself. They understand how toxic the man is for their campaigns, and the last thing they want to do is remind people that he’s one of them. Ring of Fire’s Farron Cousins discusses this.

With Donald Trump’s poll numbers continuing to tank and Republicans having to defend 23 Senate seats out of 35 Senate elections this year, how do they reconcile that? Right? You have a hugely unpopular president from your party and you gotta defend 23 Senate seats. How do you tie those things together? Well, don’t worry because Republicans around the country have actually found a way to kind of get around this and the way they’ve been getting around it since March is to pretend like Donald Trump doesn’t exist. Since March there have been 15 publicly released Republican for Senate ads. These are across the country. Not all from one particular candidate, you know, it’s kind of spread out, but each candidate that has released one of these ads, 15 ads total, they all have one thing in common. There is not a single mention of Donald Trump in any of these ads.

None. There is no imagery of Donald Trump. 15 ads from different Republicans running for Senate all over the country and none of them mention the president who is from the same party as them running the country. That’s how unpopular Donald Trump is right now. He’s so unpopular that Republicans running to retain control of the Senate have to pretend that he doesn’t exist. Like whoa, president? I don’t know. Is there one of those? I don’t think, I don’t think we did that this year. That’s, that’s, that’s what Republicans are doing in order to convince people to vote for them. You know, typically the party that controls the white house, the people running for election will do whatever they can to tie themselves to that person. You know, when Barack Obama was president Democrats did everything they could, they showed imagery of Obama. You know, they were shaking his hand.

Republicans did in 2018, by the way, you know, oh, look at me, I’m with Trump. I am so special. Trump endorsed me. Here’s a clip of him endorsing me. And I think that’s actually why they decided not to do it this year because they saw what happened to them in 2018. It did not end well for them. You know, playing clips of Donald Trump’s saying what a cool, great person they are. I’m not saying it failed across the board. Obviously some Trump backed candidates won. I’m sitting in a district where one of them did in a state where one of them did, so that sucks for me. But for the most part, most of them lost and they don’t want to make the same mistakes this year. They know that Trump is unpopular. They know that his policies are unpopular. They know that he hasn’t done anything to actually help average American citizens.

They know that he has failed with the pandemic. They know that he has failed with response to the civil unrest and the racial inequality in this country that people are protesting. He’s doing nothing about it now, except making it worse and siding with the oppressors and Republicans know that this is toxic. If the Democrats had a stronger candidate at the top of their ticket, it would already be over folks. It would already be over. But sadly Biden has a very good chance to lose this because he’s so God awful as a candidate. Democrats, take my advice. Please pick somebody else at the convention. Just do it. Just revolt. I don’t care. Anybody else because Biden ain’t it. Anybody else will be running away with this and we know that because right now we’re watching Republicans run away from it. They know how horrible this man is. But the Democrats had to pick the absolute worst person out of their crop of 500 people they had running for president, picked the worst possible guy.

It’s ridiculous. It’s absolutely ridiculous. But again, let’s make this about the Republicans for the time being. They know they’re in trouble. They know that Trump is bringing them down. They know that they have nothing to offer themselves to the American public. They never have, other than lies about taxes and the economy. Nothing that they tell us is true. Nothing that they’ve told us about taxes or the economy has been true for more than 40 years at this point. But they’re going to keep telling us those same lies this election cycle. They’re going to pretend like Donald Trump doesn’t exist and they’re going to act like they got something better to offer you than the Democrats. The truth is they don’t have any of those things. Trump does exist. He is a burden on their ticket. The tax cuts have not helped the economy at all. They haven’t given anything to average Americans and the Democrats though, not all that better, still on the whole are better than the Republicans.