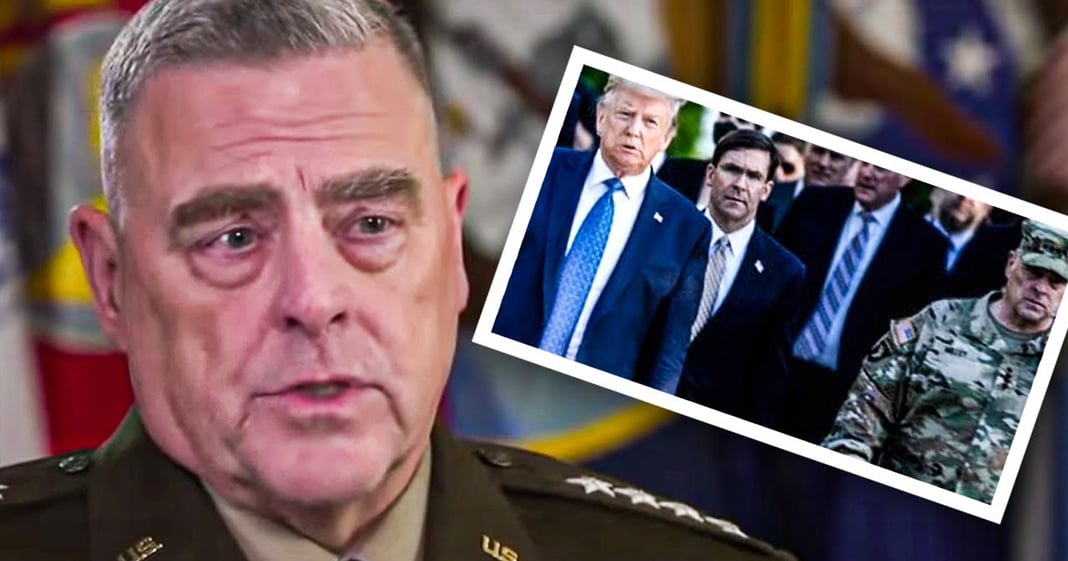 General Mark Milley, the Chairman of the Joint Chiefs Of Staff, has formally apologized for appearing in Donald Trump’s photo-op in Lafayette Square last week where protesters were tear-gassed to make way for the Trump brigade. Milley still defends the work of the military with regard to fighting the protesters, but he also understands that the optics are pretty bad for him and everyone else involved right now. Ring of Fire’s Farron Cousins discusses this.

General Mark Milley, the chairman of the joint chiefs of staff and the top general at the Pentagon came out yesterday, during a teleconference speech to the national defense university, where he apologized for appearing in that photo with Donald Trump from last week in Lafayette square. Now I’m sure everybody knows what I’m talking about. That was when Donald Trump, Milley, Bill Barr, Hope Hicks and all the other, you know, crazy people from the administration walked from the white house rose garden over to st. John’s Episcopal church in Lafayette square. Trump did the photo op holding up the Bible and looking around, making sure everybody sees me with a Bible. But in order to get that photo, they had to gas all the protesters who were peacefully gathered in that area and that’s why this thing sparked such massive backlash. The federal government basically stripped these people have their first amendment protections. Used unnecessary force against them, according to the media outlets who were present at the time, specifically CBS has said that the official story is an absolute lie.

These people were not told to disperse. They were not given warnings. They were simply gassed by Bill Barrs jackbooted thugs and Milley, General Milley was a part of that. But yesterday he made it known that he is sorry that he did this. He apologized to the other members of the military for his involvement in this and said that he is sorry for, you know, bringing politics into the military and vice versa. In fact, this is exactly what he said. He said, as many of you saw the results of the photograph of me in Lafayette square last week, that sparked a national debate about the role of military in civil society. I should not have been there, my presence in that moment and in that environment created the perception of the military involved in domestic politics. To his credit, first of all, that’s a pretty half-assed apology, but anyway, to his credit, he did go on and kind of seemed a little more sincere about other things he was talking about.

For example, George Floyd’s murder. He did sound very sincere about that and said, we have to do something. The military, we’re not even very good with, you know, integrating and, and equality, racial equality in the military and we have to get better. So yeah, that was better than his half-hearted apology, but I do want to say this about Milley. This isn’t necessarily a defensive of him or an endorsement in any way, but according to reports, Milley has been the one from the Pentagon who has been putting up roadblocks to Donald Trump because Trump had wanted far more soldiers on the streets of the United States than he got. He wanted more soldiers in DC than he got and Milley is the one, according to reports, according to people who were there, who actually stood up to Trump.

You know, there was allegedly that shouting match and it was Milley who prevented that from happening, general Milley. So if that is true, then general Milley, thank you. General Milley, if you are in fact sorry that you appeared in this photo op, not just because of the optics that it gave off, but because of the fact that people had their first amendment rights trampled for you to be in this photograph. If you’re sorry about that, then thank you. But if it’s just because, oh, shucks. Now people are mad at me. If that’s why, you’re sorry, just because people are mad at you, then I think you know where you can shove that apology.