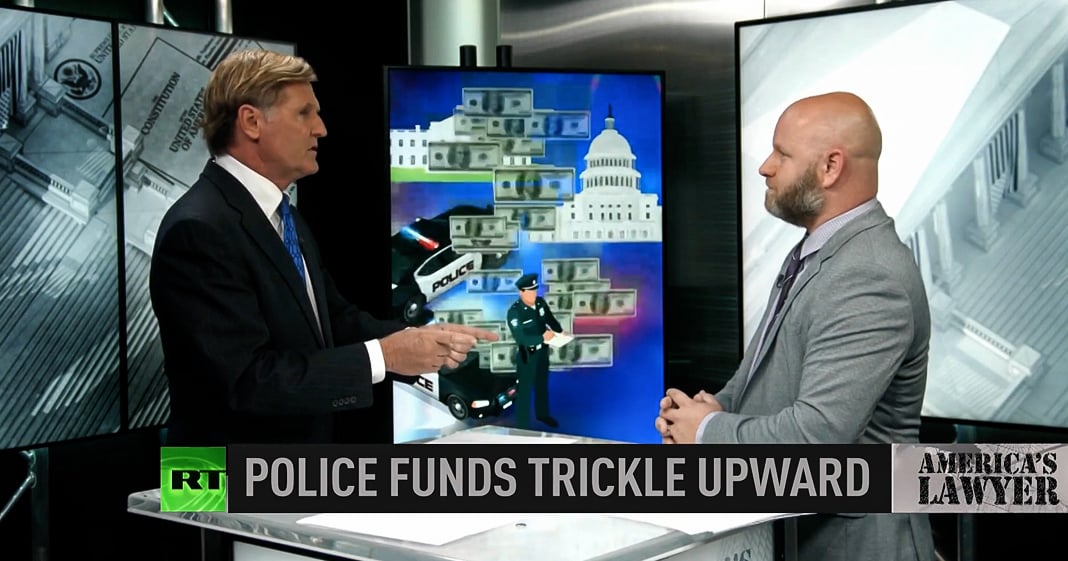 Via America’s Lawyer: Capitol Hill has a very good reason NOT to defund police departments, as much of their funding actually makes its way back to lawmakers and even President Trump himself. Mike Papantonio & Farron Cousins discuss.

Mike Papantonio: Most Americans agree that we need policing reforms and there’s a very obvious reason why those reforms have never happened, political money. Talk about this, the police talk about the police, you know, you would think they would understand what’s sincere and what’s not. What, tell, tell me about this. Nancy Pelosi gets this money from the police unions, right? Then she turns around and does what?

Farron Cousins: Well, aside from the ridiculous photo op.

Farron Cousins: She does absolutely nothing. She does absolutely nothing. You know, the, the relief bill or the reform bill, excuse me, that we saw earlier this week. It includes almost nothing that isn’t already codified in state laws across this country. You know, they, they made the choke hold illegal. Okay, well the choke hold is already illegal. We might, might get rid of qualified immunity. Well, some States have already done that and there are certain limitations on it already. So that’s not a whole heck of a lot, but once you.

Mike Papantonio: Well, okay, the performance art. What a ridiculous, how ridiculous did democratic leadership look dressed up in African garb on their knees? The, the African, did you see this photo? It’s unbelievable. The worst thing about it is this 80 year old woman couldn’t even get up after she had been on her knees, looking like a total buffoon. The African American community has reacted to it. They said, how dare you think we are this stupid? How dare you? And she’s doing the same thing with the police officers. How dare you think we’re this stupid Nancy Pelosi, Chuck Schumer, idiots running the democratic leadership. That, doesn’t that kind of set up what you’re talking about here?

Farron Cousins: Well, it does and the center for responsive politics who tracks money in politics at all levels here, they’ve come out and said, listen, we know everybody wants reforms. The polls have increased by I think 20% in the last week on that. This, this is universal, but they’re saying, listen, the Democrats are trying to sell you one thing, but follow the money. You have to follow the money. Most of this police union money, most of the police super PAC money is going to Democrats in Congress and in the Senate and that’s, what’s preventing real reform from taking place at the national level.

Mike Papantonio: So this is a facade.

Mike Papantonio: Your point is the whole Nancy, the, the idiot show that we saw with her down on her knees with Schumer dressed up in African garb. If I were, you know, the reaction is exactly what you would think. How dare you think we’re this stupid? But they do think that. Now, apparently they think the same thing with police officers, right?

Farron Cousins: They do and that’s also part of the problem. Everybody in DC thinks they’re the smartest person in the room. They think they can always have their cake and eat it too here. We’re going to pay lip service over here, pay lip service over there. But at the end of the day, we’re always going to do whatever’s going to help my next campaign. That is where it is. You know, the, the black lives matter, the protesters, they’re not the ones funding these politicians. The people calling for reforms, they’re not funding these politicians. So they’re unlikely to get what they want from the current people, the current leadership in DC. They want what they want to happen. They know what to do, and that is get rid of the leadership that’s there now, or else it will never happen.

Mike Papantonio: Oh, it’s a, it’s a disastrous bunch of leadership. They’ve got to. Farron Cousins, thank you for joining me. Okay.