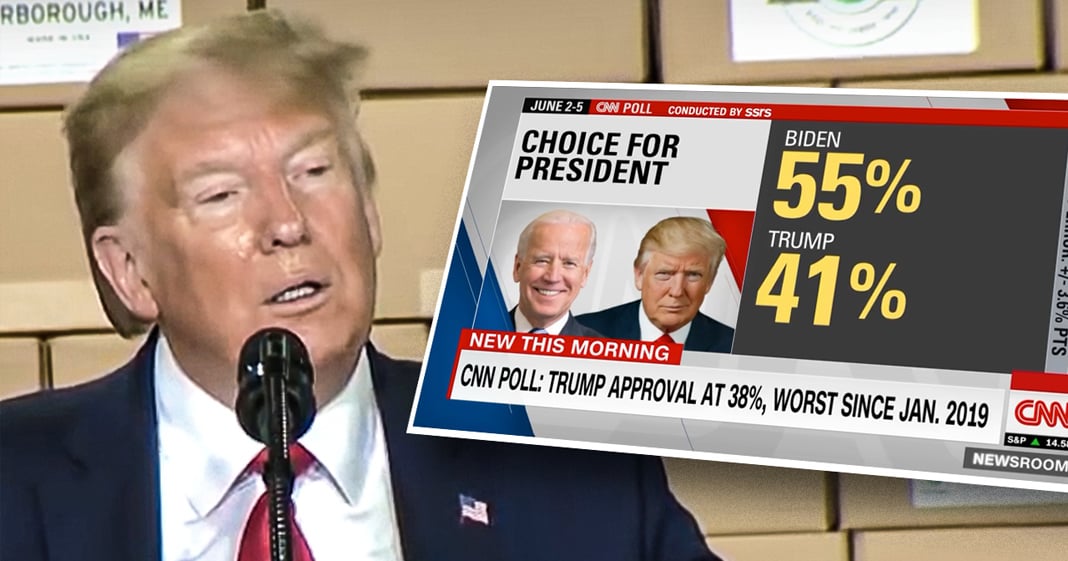 President Snowflake is at it again, this time demanding that the CNN network apologize to him for publishing a poll that showed Trump was losing to Joe Biden, massively. The poll was conducted correctly, but it hurt Trump’s little feelings and now he needs the cable news network to make him feel better. That’s not what the media is there to do, as Ring of Fire’s Farron Cousins explains.

Donald Trump is as usual furious about the latest poll numbers that show him lose, losing to Joe Biden and he’s actually still furious right now about the CNN poll from earlier in the week that showed Joe Biden, beating him by 14 points nationally. And because he’s so angry, his campaign has decided they’re going to do something about it. They’re going to try to ease his anger a little bit, make him feel better about himself. So his campaign has reelection campaign has sent a cease and desist letter to CNN telling them they cannot under threat of lawsuit, continue talking about this poll and they must immediately issue a retraction for it because CNN, allegedly, according to Trump and his reelection campaign, totally made it up. The whole thing is absolutely fake. It’s fraudulent. They interviewed people that aren’t even registered voters. The whole poll was biased, they’re telling us.

And they’re telling us this because they hired their own independent consultants, McLaughlin, to look into the poll and McLaughlin is actually rated as one of the least trustworthy and reliable pollsters in the country because they actually make stuff up. So they hired a group that they know is totally fraudulent to come up with information to say that CNN’s poll was totally fraudulent. And based on that fraudulent information, which CNN was easily able to refute, they’ve told CNN, if you keep saying this poll is real, we’re going to sue you because president snowflake can’t take the onslaught of bad news that he’s getting right out. That’s what this is about, folks. You know, conservatives love to talk about how, how sensitive and snowflake like liberals are, but by God, the biggest snowflakes on the planet belong to the Republican party of the United States of America.

This man is furious about a poll, but if he thinks CNN made it up, then I wonder what he thinks about the other polls, because we also have polls from ABC news, Washington Post, Monmouth University, NPR, PBS news hour, Marist college, NBC news, wall street journal, Quinnipiac University, and Fox news that actually all show the exact same things. All of those outlets have also released polls in recent weeks, showing Joe Biden winning by double digits. So what’s more likely, that every single outlet out there, including the conservative ones came together and conspired to all somehow come to the exact same polling conclusion or that this McLaughlin group that Trump and his campaign hired is just absolutely lying? I’m going to go with McLaughlin lying because that’s actually what they have a history of doing. Colluding with one another isn’t necessarily something that media outlets are good at or they’ve, that they really have a history of.

Unless of course a corporation sends them a, you know, paid spot to read like Amazon does. Other than that, not a whole lot of cooperation between the networks here. Trump is terrified. He knows that these poll numbers are real, but he has to create that doubt in you, in his base, in the public. He has to make them think that they’re not real, but the question is why? Okay. So if somebody thinks the poll isn’t real fantastic, does that change their opinion of Donald Trump? Probably not, but it will help Trump feel a little better. It might make him sleep a little better at night, even though the country’s going to hell rather quickly and he is doing absolutely nothing about it, which by the way, actually helps explain why his poll numbers are so bad and getting worse.