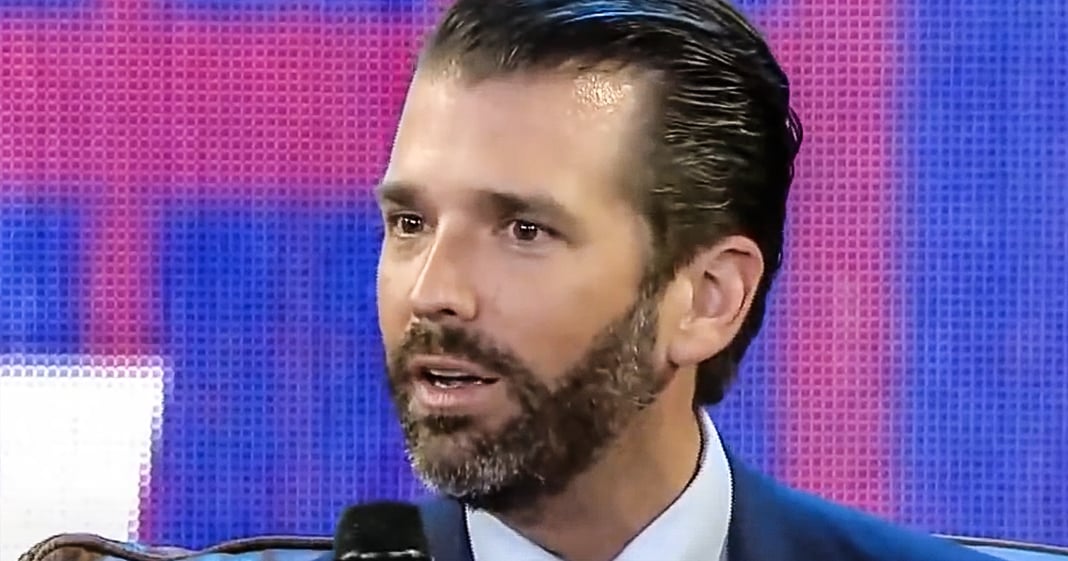 Last August, Donald Trump, Jr. went to Mongolia for a hunting trip (where he was killing sheep – a perfect metaphor for his family.) The trip included Secret Service detail at the expense of U.S. taxpayers, and we have now learned that the total for the trip was over $75,000. Taxpayers shouldn’t have to pay that much for the President’s wealthy adult son to go on vacation, as Ring of Fire’s Farron Cousins explains.

Last August Donald Trump jr. decided to head over to Mongolia on a hunting trip and while he was in Mongolia, the whole reason he went over there was because he wanted to hunt the Argali sheep, which happens to be a threatened animal globally, not, not a ton of them left. But Hey, Trump jr. wanted to kill one. So he got to go over there and hunt one, and he paid for the trip himself. Sure. Except of course for one vital part of the trip and that was the secret service protection that he received. And we now have the receipts thanks to citizens for responsibility and ethics in Washington who have now told us that this trip, just the secret service protection that Trump jr. received on the trip cost US taxpayers more than $75,000. To be exact, the grand total was $76,859 and 36 cents.

That’s how much we paid out of our tax dollars to have secret service fly with Trump jr., the president’s adult wealthy son, to Mongolia so that he could kill the largest sheep in the world. He wanted to kill a sheep, so taxpayers had to pay $76,000. Now none of that makes sense and CREW goes on to say that as the president’s son, of course, he is entitled to secret service protection and we’re okay with that. We just want a little more transparency. Well, I’m not going to be that diplomatic about it and I haven’t in the past, when we talk about these exorbitant price tags that we have to pay for Trump’s grown adult wealthy kids, and here it is. Trump jr. should not have secret service protection at all. Not at all. He is a grown human being, an adult who makes his own decisions, who does not live with the president, who is not a part of this administration and therefore does not deserve these secret service protections. We, the taxpayers should not be footing the bill for this.

The man has private security that he pays on his own, so did Trump, before he became president. They can afford it. They already do it because they like to do it. We don’t need to give them this extra security. So no, I do not feel like Donald Trump jr. is entitled to this kind of taxpayer supported security. He’s absolutely not and furthermore, whenever we see these conservatives out there who try to tell us that, oh, Trump’s such a good guy. He’s donating his salary back to the government. Well fantastic. He’s also costing US taxpayers in secret protection for his non administration official kids. He’s costing us a hell of a lot more each year than he is donating back to the federal government. So just shut your stupid mouths with that argument right now because it is infuriating and it shows how either stupid you are, willfully, or that you truly truly have bought into your own propaganda. Trump is not saving the government money, money. He’s not doing anything altruistically. He is bilking US taxpayers, he and his kids, for every single dime that they can. They’re going out there having fun at our expense. That’s what’s happening right now and this needs to come to an immediate end.