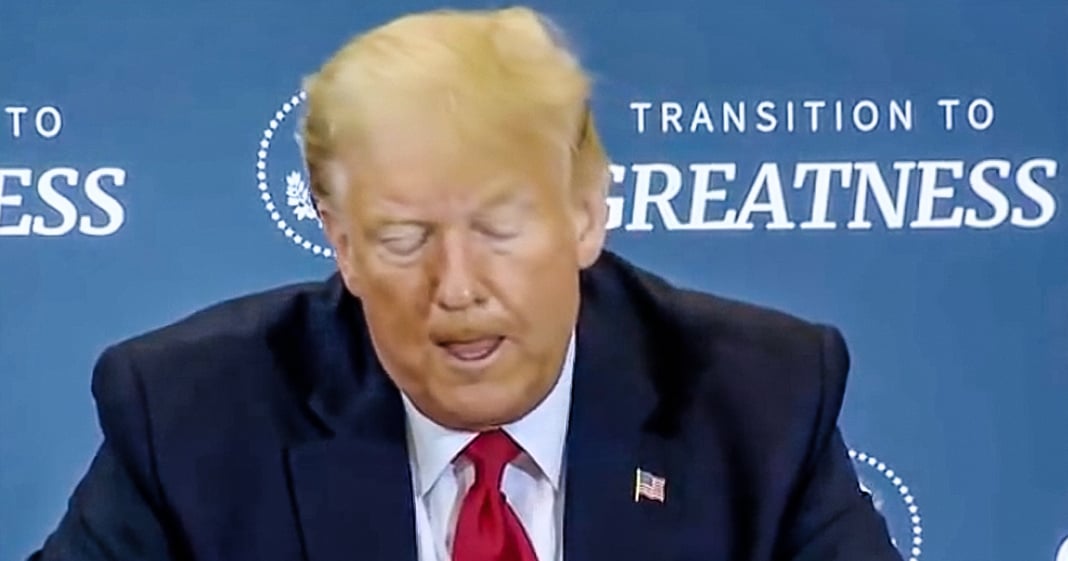 Donald Trump is trying to deny the very reality all around him at the moment because that reality isn’t very good for his poll numbers. And if things get worse (and they will) those poll numbers are going to tank even further. New numbers are showing that the 2nd wave of the Coronavirus is currently upon us, and the President is acting like this isn’t even happening. Ring of Fire’s Farron Cousins explains what’s happening.

Well folks, if you look at the numbers available right now, it looks like we have actually entered the second wave of COVID-19 infections here in the United States. We have now nationally passed 2 million confirmed cases and in States across the country, both the red States and blue States, mostly red States, we’re seeing the second wave of infections hit and there is a reason why I emphasize the red States and I’ll get to that in just a moment. But again, it’s not limited to red States. Just this week, the past seven days, California has seen the highest number of COVID-19 hospitalizations than they had seen throughout this entire pandemic. California had done a fairly decent job of containing this. Then of course, they decided to start phasing reopening, and this is what happens. More people got infected. Then over to the red States, Texas and Florida being the absolute two worst out there.

Arizona’s actually experiencing a horrible wave of it right now as well. But Texas and Florida are even worse because they have also tried to fight the restrictions that were in place. Texas, by the way, last Wednesday reported 2,500 new coronavirus cases, which was the highest one day total since the pandemic emerged. A month into its reopening, Florida has reported 8,553 new cases in the past week, the most of any seven day period that they’ve had and here in the state of Florida, by the way, I think four days ago, we had our highest day ever with 1,417 new coronavirus cases. The second wave is here, at least in some States, the States that already made it through the first wave, or maybe this is, you know, the tail half of the first wave. That’s what’s so awful right now is we don’t even necessarily know what wave this is.

Is, is it still part of one? Do we still count it as one because it never stopped or do we count it as two because they went up? Who knows? But the thing that everybody needs to keep in mind right now is that the pandemic has not ended. I understand there’s other very important issues that we’re seeing more and more on the news right now. But at the same time, we still have to be aware that that doesn’t mean that just because we’re not seeing it on our TV, that we’re okay to go to the grocery store without a mask on and, and, and, you know, stand right behind somebody in line. That’s still not, not okay. It’s not, but that’s the problem we have with society today. Is that if you think if you’re not constantly being told not to do something that it’s okay to go do it. And another problem, and this is probably the biggest problem, but I think a lot of this does by the way, have to do with personal responsibility, where a damn mask, folks. Wear a damn mask.

You have other countries out there that are basically coronavirus free now because they did the social distancing. They wore the masks. They, they stayed at home when they were supposed to. They weren’t frigging idiots like we are here in the United States and they’re done. They don’t have to worry about this shit anymore because they fucking listened. Yeah, it pisses me off and it should piss everyone off because we’re so goddamn stupid collectively as a country that we’ve made it this much worse. But again, what makes it even worse than that is Trump. Trump doesn’t give a damn anymore. As Dr. Fauci told us over a week ago, Trump stopped communicating with the coronavirus taskforce. Coronavirus taskforce isn’t even meeting as much anymore. They’re not really doing anything. They’re still tracking it. You know, they’re, they’re doing something, but they’re not doing as much as they were and of course, as I mentioned, Fauci says, Trump’s just totally checked out of it. Trump doesn’t care anymore.

So the administration itself doesn’t care anymore. The only thing Trump is concerned about right this minute is his poll numbers. Man’s been bitching and crying about it all week. I mean, we’ve got real race problems here in the United States. We have a pandemic that is getting worse in this country and the president’s out there bitching about his poll numbers on Twitter. That’s what he’s doing. He has actually threatened to sue, threatened to sue CNN yesterday because the poll showed him losing to Biden by 14 points. The man is fucking crazy and at this point, as I’ve said before, so is any other person in this country that still supports this man un-ironically. This is absolute nutso. We have to do better as a country, not just with the personal responsibility of not infecting others with coronavirus, but with our political choices. This is what happens. This is what happens when you elect a psychopath with absolutely no experience in government and no history in his entire life of giving a goddamn about any other human being on the planet. Sorry, folks. This is what happens. Please, for the love of God, don’t ever do it again.