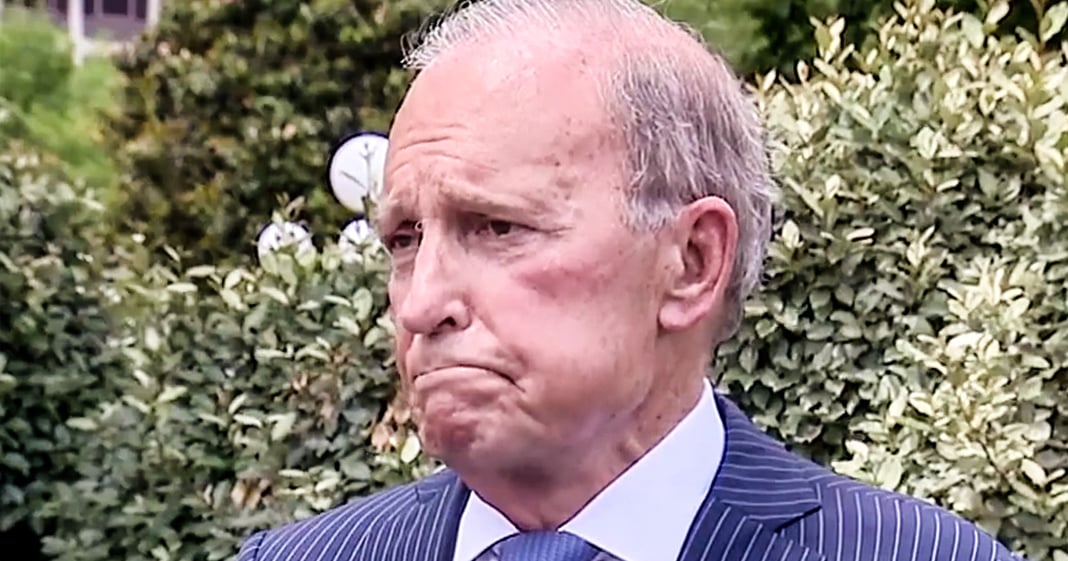 Donald Trump’s economic adviser Larry Kudlow told reporters this week that systemic racism doesn’t actually exist in the United States, then he refused to go into further detail about his claim. Here’s the thing about systemic racism – it isn’t an opinion, it is a provable fact. Ring of Fire’s Farron Cousins goes through the list of figures that prove that systemic racism is real.

You know, unless you choose to bury your head in the sand or you just enjoy being ignorant, you’re probably not going to say that there’s no racism in the United States and you’re certainly not going to say that there’s not systemic racism here in the United States. Most people have seen it if not happened to them, happen to others, or they have read about it. They have looked at statistics and like I said, you would have to be willfully ignorant of the issue or intentionally deceptive in order to say otherwise. And I guess one of those categories is what Donald Trump’s economic advisor, Larry Kudlow, falls into because yesterday Kudlow told a group of reporters that he does not believe that systemic racism actually exists here in the United States. His exact words were, I don’t believe there’s systemic racism in the US. I’m not going to go into a long riff on it.

Then they asked him again, like, well hold up now because we have statistics that prove that this is real. So what do you think? And he says, I will say it again. I do not. I think the harm comes when you have some very bad apples on the law enforcement side. What was done to Mr. George Floyd was abysmal, abysmal, but I believe everyone in this country agrees with that. Aw, see he had his little reverse, reversed, rehearsed talking point there that he was ready to say, like, it was a abysmal and I think everybody agrees. This was just awful. It was a tragedy. But see, they didn’t ask you that question exactly like that. They asked you about systemic racism. So you being the good, loyal little Trumpist that you are, you had to stick to that talking point. So you had to go through quite a bit of twists and turns there to kind of wedge it into this conversation where it didn’t fit at all. Like, you weren’t asked about police brutality against African Americans.

You were asked about systemic racism, which encompasses everything and you, as the economic adviser should know that systemic racism is built into our economic system here in the United States. African-Americans make about 27% less than their white counterparts, which means if you take a black person doing a job and you take a white person doing the exact same job, exact same company, that black person is likely to be making 27% less or 27 cents less on the dollar than that white counterpart. That is what is happening across the United States right now. The justice system, an African American defendant going up against the same judge as their white counterpart for the exact same crime, the African American defendant on average is going to get a prison sentence that is 10% longer than the white person will get. African-Americans far more likely to be pulled over by police officers until, and this is an interesting part of this statistic, until sun goes down and then cops can’t see the color of the person driving the car as well anymore.

So the number of white people pulled over after dark increases because, oh, we didn’t know you, weren’t black. I could go on and on and on and on Larry, because these statistics are very easy to find. There’s scholarly articles about them and I know because they’ll show up in the top results of Google. Any, anybody in this country with internet access can, can read these kinds of things, Larry. Just like, I know you have, Larry. You’ve been involved in economics for quite some time. I know you’re not very good at it, but you talk about it a lot and you did that on CNBC. So I know you understand and I know, you know what I’m talking about here. Systemic racism is very real. It’s real in the criminal justice system. It’s real in the capitalistic system. It’s real in the environmental system as African Americans and other minority groups are far more likely to experience higher levels of air pollution, where they live, than their white counterparts. That is systemic racism and that is what we’re talking about. That is what we’re trying to raise awareness about right now and fix the problem because it’s not just, not just about police officers killing unarmed black people. That is a huge part of it, but the problem is so much deeper, so much more ingrained in our society and all of it, all of it has to be fixed because if any part of it remains, then racism still will remain a part of American culture.