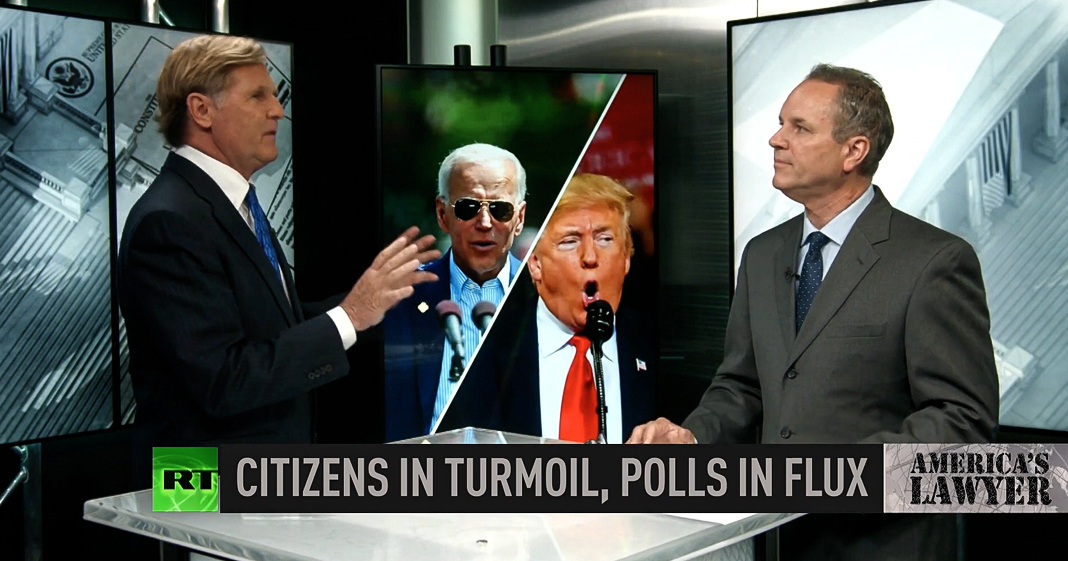 Via America’s Lawyer: Media analyst David Lamb joins Mike Papantonio to update us on the 2020 presidential race, as Biden and Trump’s poll numbers are reeling from one of the most tumultuous election years in U.S. history.

Mike Papantonio: Polls show Americans are looking ahead to the presidential election as a chance to return to normalcy, following the nightmarish pandemic, historic recession and sweeping civil unrest. But what do numbers really mean for Biden and Trump? Media analyst David Lamb joins me to talk about this. David, first of all, let me, let me get this out on the, you’re a media analyst. You follow polls. Let me tell you my problems with polls.

Mike Papantonio: They were a disaster in 2016, okay.

David Lamb: Unmitigated, no argument there.

Mike Papantonio: So, so are they defending, are the poll industry defending themselves on this? What are they saying? Because I look at a poll right now, I go, meh. What does it mean? It doesn’t mean anything to me.

David Lamb: Pap, you’re going to love this because their response is we got it right.

David Lamb: Okay. Even though there’s scant evidence of any pollster or polling service that actually said Donald Trump was going to win, but they said we did get the, Hillary Clinton won the, the popular vote. We were right on that, but it is hard to, to understand and, and really believe that the pollsters in 2016 and it’s difficult to trust them in 2020.

Mike Papantonio: What impact, okay, so here we’re, we have all this turmoil. We’ve got the pandemic, we’ve got protests. We’ve got a guy that can’t speak without saying something stupid.

Mike Papantonio: He can’t Twitter without saying something stupid. What does it mean in the polls? Have the Democrats made a decision that Biden’s in? Because you listen to a guy like James Carville, oh, it’s over. All Biden has to do is stay in his, in his cellar and, and not say anything and everything’s going to be okay. What is your take? You followed races like this a lot.

David Lamb: I have and this is an interesting race that we have here, because this is all about Donald Trump. That’s really what this is about. Love him, hate him, it’s all about him. But, so the polls show that Biden has a clear advantage and has for some time over Trump, the average is anywhere six to eight percentage points. There’s a poll, the NBC news wall street journal poll that showed Biden’s advantage 49, 42 up some, but Biden has led this race for a good long while. But what’s interesting is that he really has done it from his basement. It’s, it’s had little to do with what Biden has done right and, and you ticked off the list of what this year is, what 2020 has been like for Trump. It’s just been one, one struggle, one challenge, a pandemic, a disaster right after the other and it is certainly reflected in the polls. President Trump has an incredible uphill climb to pull this out.

Mike Papantonio: Yeah. Well, let’s talk about that climb. Hillary Clinton, I went back and looked at the polls. I’m interested to know where was she at this time against Trump?

David Lamb: All right, so normally nationally Clinton had a one point lead over Trump nationally at this point in 2016. University of Virginia center for politics showed a comparison of Clinton in 2016 versus Biden today and this is how it looks. First of all, a little caveat, these national polls are just meaningless. What matters is battleground States, how they’re doing in the battleground States, because you’ve got to cobble together this electoral college votes. That’s really what matters. Remember Clinton won the popular vote and she’s not the president. So in these battleground States that are crucial, Michigan, Clinton was up four, Biden is up seven. In Florida, a key state, huge number of electoral votes, Clinton was barely down. Biden is up three and a half percent. Pennsylvania, Clinton barely up about two points, Biden up seven. Georgia, Clinton was down nearly five points, Trump/Biden are tied and Arizona Clinton down four, Biden up five and a half. Of note here, president Trump has announced where he’s going to be going for these rallies once the, he gets the clear you’ll notice he’s going to Arizona, Georgia, all of these States that are crucial battleground places for him to win.