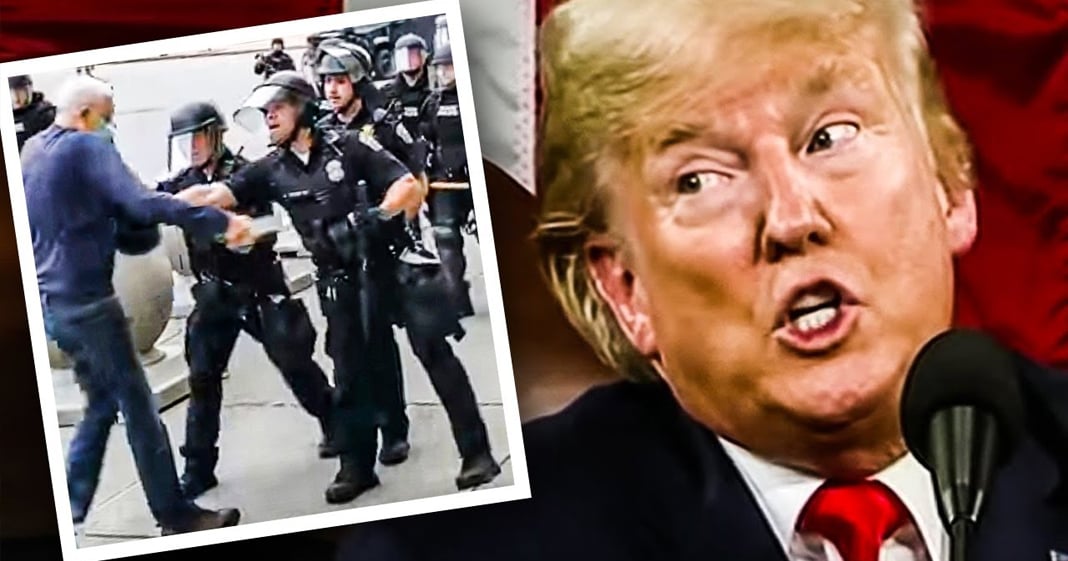 Donald Trump has never been too shy to promote a conspiracy theory, especially when the conspiracy serves a narrative. The narrative that Trump is pushing right now is that all of the protesters are bad and all the cops are good, but the videos we’re seeing everyday tell us the opposite is true. And the video of police officers shoving Martin Gugino to the ground caused Trump to claim that the 75-year-old man could actually be part of an Antifa setup to hurt the police. Ring of Fire’s Farron Cousins explains what’s happening.

You know, one of the easiest ways to tell if somebody is a bully or not is to see who they pick on. If they’re only picking on people that they know they could, you know, pretty much take in a fight that’s, that’s characteristic of a bully. They’ll never take on somebody that they know they can’t beat. And right now, Donald Trump is showing us what a bully he is by spreading conspiracy theories about a 75 year old activist. Now this 75 year old activists, a man by the name of Martin Gugino. You may not know his name, but you all know who he is. He is the 75 year old man that was shoved down by police officers, cracked his head on the pavement and has spent the last several days in the hospital in serious but stable condition, according to the latest reports.

On Tuesday morning, Donald Trump tweeted out the following about Mr. Gugino. He said, Buffalo protester shoved by police could be an Antifa provocateur. 75 year old Martin Gugino was pushed away after appearing to scan police communications in order to black out the equipment. OAN I watched, he fell harder than was pushed, was aiming scanner, could be a setup. So the president’s admitting he watched the One American News network. That’s the OAN part of that tweet, which is a completely conspiratorial propaganda network that exists only to basically pour, perform fellatio on Donald Trump from afar. That, that’s the point of, of the One American News network. That’s what y’all do. They’re spreading conspiracy theories about the 75 year old activist, Martin Gugino. I believe that’s how you pronounce his name. Forgive me if it’s not, but either way, this man was shoved by police officers, did not fall harder than he was shoved and was immediately bleeding from his head.

He is not an Antifa provocateur as Trump says. But here’s the reason that Trump is spreading this conspiracy theory, right? This guy is not Antifa because Antifa is not an actual organization. He’s not some kind of super soldier. He’s not there scanning police with his little guns. He’s not there to, you know, really rage against the machine. He is there to peacefully protest for equal rights in this country and apparently according to reports, the man’s been doing it for a very long time. He is a good person and Trump can’t comprehend the concept of being a good human being. But that’s what this man is and now he’s in critical condition or stable condition, but serious condition in the hospital because of these thuggish police officers who shoved him down for absolutely no reason.

So why is Trump pushing this conspiracy theory? Why his OAN pushing this conspiracy theory? Well, the answer is simple. They’re doing it to protect the cops. They’re doing it to make it seem like the actions of these police officers are not as bad as they looked on camera. And the reason they’re singling out this particular issue, instead of say protecting the cops who literally ran over protesters in New York, that actually should be an easy target for Trump, I mean, it’s New York. He hates the leadership in the state of New York. The reason they’re defending these cops is because this was a white dude. This was an elderly white dude and we all immediately saw that the guy was bleeding out of his head. Now, the reason I have to point out that obviously, that Martin Gugino in the video is white, is because I think that woke a lot of white people up too. White people suddenly got to see Holy crap, they’re doing it to white people too, now. African-Americans get it thousand times harder and a thousand times more frequently than white people do.

But that woke a lot of people up too and they thought, Holy crap, that’s what black people have been dealing with for a long time and it could happen to me. It could literally happen to my grandfather. So people are pissed. That shifted a lot of things when you look at the polls right now, that shifted a lot of person, personal opinions. So Trump’s out there trying to defend it, trying to downplay it saying, hold up folks, this guy, Martin Gugino was basically the Captain America of Antifa. He’s evil. He was taking on that squadron of police officers. No, the man wasn’t. The man was shoved down by police officers, police officers who later claimed that, oh, he just tripped and fell. We know millions of people have seen the video, but trust us, he tripped and fell. No, the cops were scumbags. Martin Gugino is a hero and Donald Trump is an absolute piece of trash for trying to downplay what these cops did and put some kind of positive spin on it, just to improve his polling.