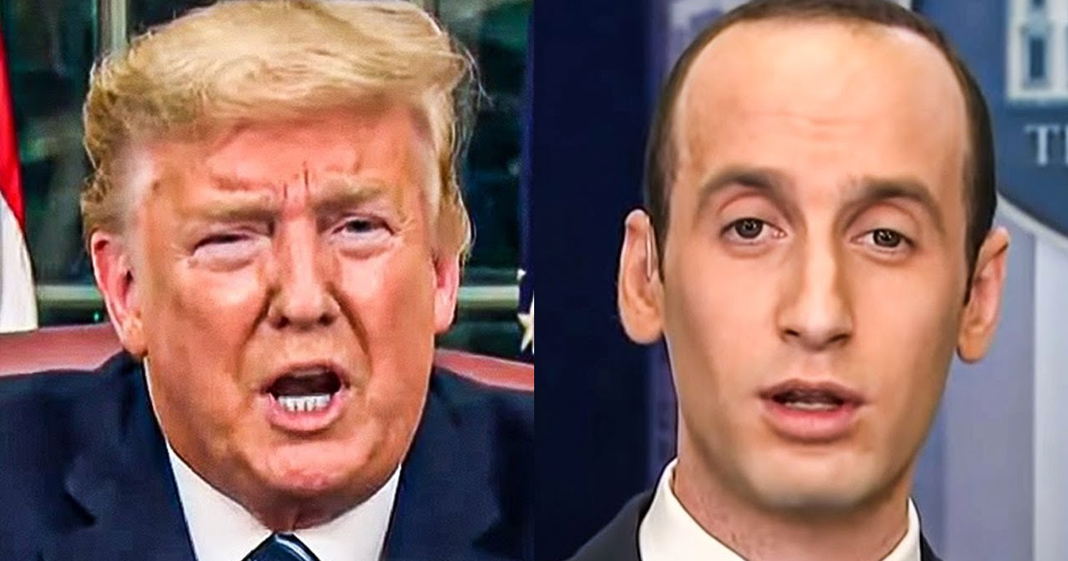 Donald Trump is planning on delivering a speech on race relations in the United States, and his tapped his trusted aide Stephen Miller to write it. If that concerns you then good, it should. Miller is a noted white nationalist who has been the force behind the administration’s most racist policies to date. This speech will make things so much worse for this country, as Ring of Fire’s Farron Cousins explains.

Donald Trump is preparing to, I guess, address the nation on the issue of racism. Maybe hit on police brutality a little bit in there, but either way it’s at least two weeks late, but nevertheless reports say the president is planning to address the nation. And of course, if you’re going to address the nation, you got to have a speech, right? So Donald Trump reached out to his most trusted advisor, the guy on his staff that is most like him and said, you, you will be the one writing my speech and that person happens to be white nationalist, Stephen Miller. And the reason we say white nationalist Stephen Miller, is because Stephen Miller’s history is filled with white nationalist tendencies, all the way from before the Trump campaign, when leaked emails revealed that he had been sharing racist articles from Breitbart. He is the mastermind behind some of the most racist policies from the Trump administration, including things like the travel ban and the separation of families at the Southern border.

Those are Stephen Miller projects. And so of course, why not pick the guy who thinks that white people are superior to everybody to write your speech about racism in the United States? I mean, is that why you reached out to Stephen Miller? Because he knows a thing or two about racism. I don’t get it, except they do get it. That is what this administration is about. There is no way, even if he didn’t have Miller writing the speech that Trump could go out there right now and say anything believable about the issue of racism. There is no way this president could go out there and offer any kind of words to heal the nation. That’s not the kind of person he is. And that is unfortunately the kind of leader we need right now and we don’t have it. I’m starting to think we don’t have it anywhere in government at any level, because we’re not seeing it happen.

You know, Oprah Winfrey tried to do her little, you know, conversation with America yesterday evening for those who chose to watch it. But that really didn’t offer much, much help for anything. We need actual leaders, leaders in a position to do something, not leaders in a position to, you know, flout their power in front of us and say, look, I’m doing, no, you’re not. We need something more than Democrats dressing up in African garb and kneeling, and then not being able to stand back up. All you did was make things worse and so how, show how idiotic and out of touch you are. But Stephen Miller is worse than all of them combined because Stephen Miller is fact racist, which again is ironic because if you look at Stephen Miller, there is nothing about him, like, when he looks in the mirror, I don’t know how he can see his own reflection and say, yes, white people are superior clearly.

No, buddy, definitely not. And you’re, you’re not a good spokesperson or spokesmodel even for white people, but this is going to make shit so much worse folks, and that’s the point. Trump wants white people to know that he’s on their side. That’s why Stephen Miller has been tapped to do this. Trump has to be racist or else he’s not going to win. That’s how he won in 2016, promising these horrible, absolutely racist beyond belief policies and with, with an election five months away, he’s got to double down on that. He has to let the racists know he is one of them. And at this point in American history, that is going to end in absolute disaster.