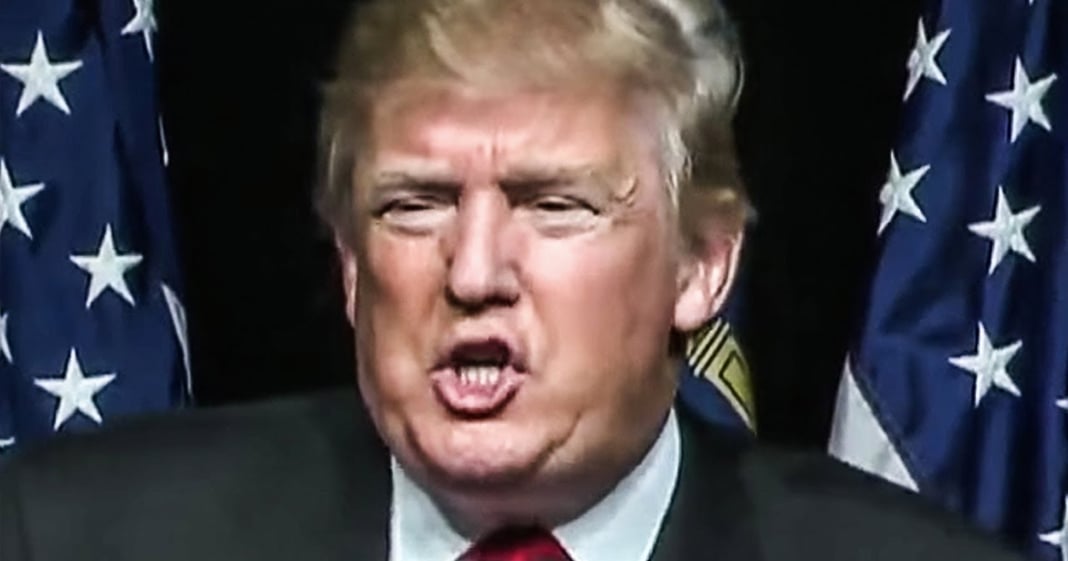 Trump came into office swearing that he was going to build a wall, and he has finally done it. But this wall isn’t along our border, it is around Trump himself. The terrified President has built himself a little cage around the White House because he is so terrified of the angry protesters that have descended upon D.C. Even as he tweets about them from inside his cage saying that they are small in number, his actions prove that he is a complete coward. Ring of Fire’s Farron Cousins discusses this.

Right now in Washington D.C. Donald Trump is hiding in a cage. In case you haven’t been paying attention, over the past week or so, the white house has started erecting new barricades around itself, around Donald Trump, new fencing, new concrete barricades, as they continue to expand the secure perimeter around the white house. Now, Donald Trump came into office promising us he was going to build a wall, right? Except at the time he told us it was going to be along the Southern border. But in reality, what’s happening now is that he’s, he’s built the wall, but he’s built it around himself because the man is absolutely terrified. So terrified that he is hiding in this little cage he has created for himself. So what is terrifying Trump? It’s not the threat of violence from these protesters outside the white house. These are not violent people outside the white house. As he has repeatedly said on Twitter, it’s not even a lot of them out there.

So why hide in the cage? Why erect these barricades? Why expand the perimeter? The truth is because Donald Trump right now, for the first time in his life, like many of the wealthy elite, they’re being challenged. They’re being challenged by the very people that they have walked over, that they have stepped on and that they have taken advantage of for far too long to get where they are. That’s what’s happening in this country right now, folks, this isn’t just people angry about a single killing at the hands of police officers. This is the culmination of everything up to that point, all of the killings, all of the racial inequalities and all of the other inequality in this country as well that does disproportionately affect, as do police killings, minority communities. It has all culminated in what we’re seeing right now and the people who’ve benefited the most from that system, people like Donald Trump, they’re running and hiding because that’s all they know to do.

They don’t think, trust me, they do not think that they’re going to get confronted by these people on the streets, that these people are going to beat them senseless. What they’re going to do is confront them with the facts, confront them with their words, confront them with their own privilege. That’s what terrifies the wealthy elite right now. That’s what terrifies those in power right now and that is why Donald Trump is building a cage around himself, not just to physically protect him, but to protect his frail psyche from having to be confronted by the inequality that he himself has benefited from along with his other wealthy buddies for far too long. This country was built on the backs of those people that are in the streets right now and they know it and so do people like Trump. They want equality, but Trump is afraid giving equality, treating these people as if they were equal to him, somehow means that he loses his freedoms or he loses what he’s gained. That’s not what this is about. This is about putting everybody on an even playing field, but even the thought of that is enough to make Trump run and hide.