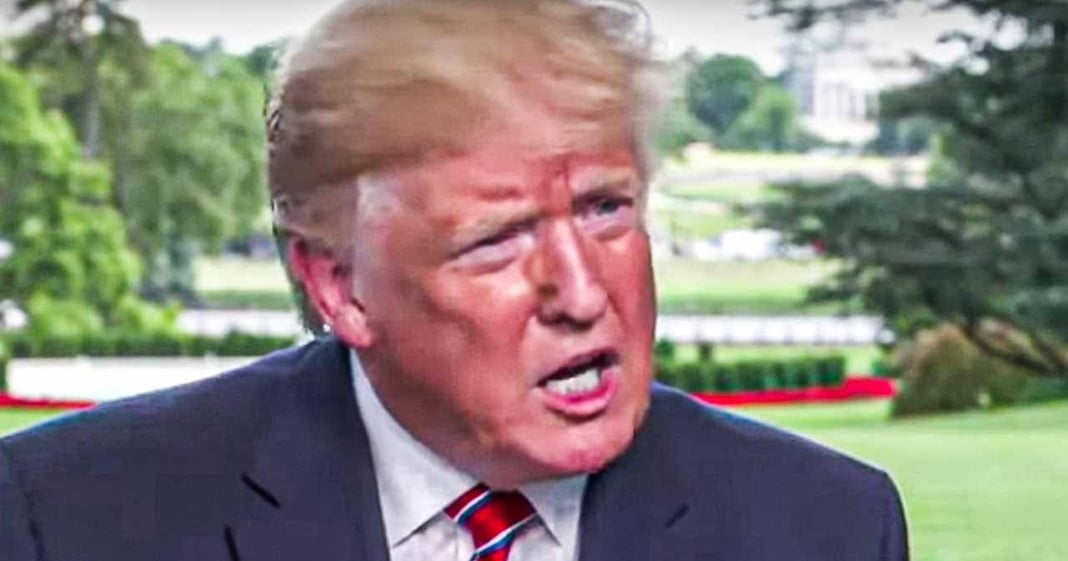 According to reports, President Trump got into a heated shouting match with a Pentagon official last Monday before his photo op at the DC church, where the President screamed that he wanted 10,000 U.S. troops deployed in order to squash the protests across the country. The Pentagon has not been very willing to bend to Trump’s requests, which is good for America, but likely bad for the future of everyone in the military. Ring of Fire’s Farron Cousins discusses this.

Last Monday, shortly before his photo op in front of the st. John’s Episcopal church right there in Washington, DC, Donald Trump got into a shouting match, allegedly inside the oval office with high ranking Pentagon officials and attorney general William Barr. Now, according to the reports, the shouting match was all with Donald Trump on one side and on the other side, you had a defense secretary, Mark Esper. You had Mark Milley, the chairman of the joint chiefs of staff and Bill Barr who were all arguing against Donald Trump. So what were they arguing about? What was the big fight happening? Well, the big fight was allegedly that Donald Trump wanted 10,000 United States military members patrolling the streets of Washington DC. That’s how many troops he wanted to march around the city and, you know, give him the illusion of safety and the Pentagon officials said, yeah, absolutely not.

That’s crazy. We’re not going to do it. We’re not giving you 10,000 of our soldiers, just so you can put on this, you know, fascist display of power. Which lets be honest, they didn’t actually use the word fascist by the way, I did, because that’s what this is. That’s what this administration is devolving into very rapidly at the first sign of any bit of civil unrest, pure full-blown fascism. The United States, executive branch is actively engaging suppressing the first amendment rights of these protesters. They’re illegally gassing them, illegally attacking them and now they want to bring out their military. Trump’s already asked about tanks and other military vehicles that he could send across the country to intimidate and terrify these protesters, to get them off the streets. This is fascism folks, and we have to recognize it and call it out for what it is and that is what it is and I think these military officials understand that as well.

They know that their job is to be in the military and they chose that path in life and some of us may or may not agree with it, but that’s a conversation for a different day. What is important right now is that these military officials, in spite of some of the bad things they may have done in their past, they understood that this was crossing a line. This is where the line is for them and it’s good to know they have a line. A little disappointed that the line is not a little, you know, further back because there’s other things that have been done by the military that they should’ve stood up to, but okay, at least there’s a line and the line is we’re not bringing fascism to the streets of the United States. Mark Milley, chairman of the joint chiefs, excuse me, was apparently, according to the reports, the one who was yelling the loudest and engaged the most with Donald Trump in this shouting match. Ultimately they agreed on giving him 1600 members of the army to patrol his streets and then all of the men present there at that little shouting match put their differences aside and they all took place in the March over to st. John’s Episcopal church, after the protesters had been gassed and cleared out from that area.

So it was all for nothing. Sure, Trump didn’t get his 10,000 troops, but he got 1600 of them. You know, maybe he didn’t get as much fascism as he wanted. He only got 10% of the fascism that he wanted. But hey, 10% is 10%, we still got to gas some protesters in the process. Right? So all these shouting matches, all these people standing up to Trump, it means nothing. They’re ultimately going to cave as we saw last week, as we saw with Mark Milley, as we’ve seen with Esper and as we have certainly seen with Bill Barr. They can stand up to Trump momentarily. But in the end, they’re always going to give him at least a piece of what he wants, no matter how anti-democratic it is.