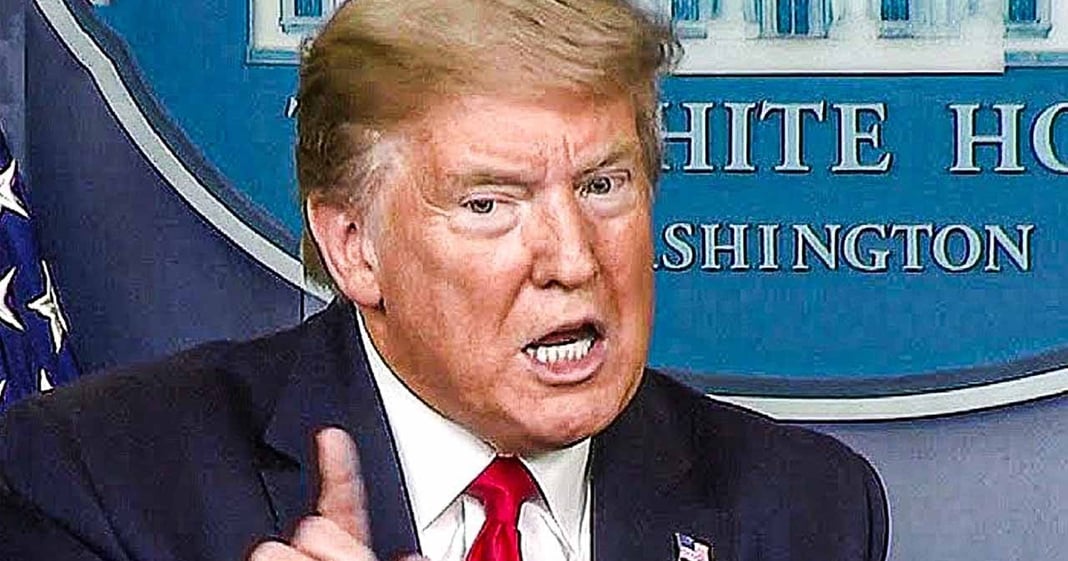 The country is heading downhill as quickly as possible right now, with massive protests about police brutality and racial inequality capturing headlines as the pandemic continues to rage. But Donald Trump can’t be bothered by things like this when his poll numbers are tanking, and the President took to Twitter to whine like a little baby about his sagging numbers. Ring of Fire’s Farron Cousins discusses this.

If you were to ask anyone in this country, what the most important issue in the country was at the moment, people would probably be evenly split, right? You have those that would say the civil unrest and racial inequalities police brutality issue and the other half would probably say the ongoing pandemic, because if you’ve been paying attention to the numbers on that, things are actually getting worse. They’re, they’re no longer getting better, we’re back to getting worse. Either way, these are two massive issues that have captured headlines for quite some time now and they are clearly the two most important issues happening in this country today. But not if you asked the president of the United States himself, Donald J. Trump believes that the most important issue happening in the United States of America today is the fact that his poll numbers are not very good. Donald Trump tweeted out yesterday the following, he said, if I wasn’t constantly harassed for three years by fake and illegal investigations, Russia, Russia, Russia, and the impeachment hoax, I’d be up by 25 points on sleepy Joe and the do nothing Democrats. Very unfair, but it is what it is. Very unfair, but it is what it is.

First of all, let’s not call it the impeachment hoax because you actually were impeached. You just were removed from office, but you were impeached. You know, you’re going to wear that scarlet letter for the rest of your life and throughout all of history, you were impeached. There’s nothing you can do about it. Cry a little harder, big baby. Now the Russia investigation, that was an investigation that did need to happen. Okay? I don’t care which side of it you fall on? Was it a hoax? Was it not? Doesn’t matter, it needed to happen. So outcome wasn’t exactly what Democrats had wanted it to be. Wasn’t exactly what Donald Trump says it was. Like, crime was uncovered. Interference was uncovered from that investigation. Those are facts. Nevertheless, as Trump says, it is what it is. Right? And had it not been for all of this, he’d be 25 points up.

Actually, no, see those things, right now are not even weighing on people’s minds, as I mentioned. The reason you’re losing so badly in the polls right now is one, because you have taken the wrong approach to the civil unrest throughout this country, instead of siding with the protesters and saying, yeah, you know what, statistics prove that you’re right, because they do and something needs to be done. Let’s all sit down, come to the white house. I’ll bring a delegation with, of you over here. Let’s sit and talk and figure this stuff out and come up with some reforms. Instead of doing that, Trump is actively out there saying, give me more military, tear gas them, get rid of them, get them off the streets, fly your black helicopters, lower to scare the crap out of them. You took the wrong side. The American public agrees that the protesters are rightfully angry about what’s happening.

Then on the pandemic, you chose to bury your head in the sand and pretend that it wasn’t that big of a problem. That the media was trying to overhype it to, I guess, what hurts your poll numbers again? You can’t do anything, right, that’s why your poll numbers are not higher. Has nothing to do with the fact that you were impeached, just what, four and a half months ago. Like, that wasn’t even that long ago and everybody’s already forgotten that it even happened, man, because we have had a world of stories emerge since then. As for the Russia thing, that was a little over a year ago, we got the results of that what 13 months ago. Nobody even cares about that anymore, except you because you’re still pissed off that it even happened.

But the truth is the reason your poll numbers are low and staying low and actually getting lower is because you’ve been exposed for the fraud that you are. People understand that you are not the person to lead them out of a crisis. You are not the person to show any kind of leadership during a crisis. They want something better, anything better and at this point it doesn’t even have to be better. The American public is just clamoring for a different warm body to occupy the white house. That’s why your poll numbers are low and also, it certainly doesn’t help that you’re sitting there crying about your poll numbers on a Sunday, when the entire country is imploding at the moment.