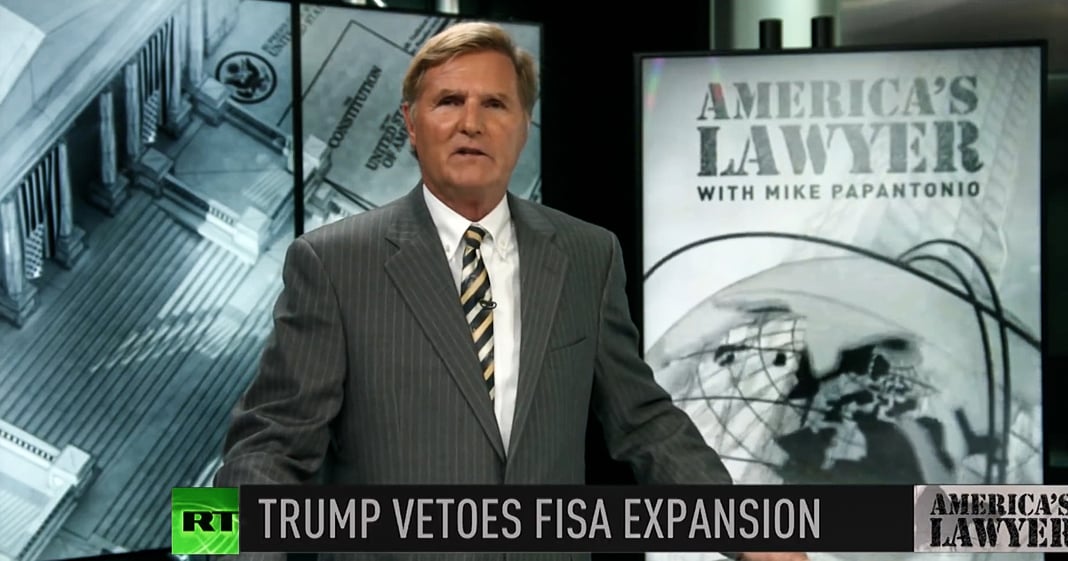 Via America’s Lawyer: Donald Trump’s threat to veto a bill that would have reauthorized surveillance powers for the federal government was actually enough to get Congress to put the legislation on hold. Mike Papantonio explains more.

Finally tonight, some good news. Donald Trump’s threat to veto a bill that would have reauthorized surveillance powers for the federal government was actually enough to get Congress to put the legislation on hold, thank goodness, at least for now. The legislation was actually supported by both Democrats in the House and their sworn enemy attorney general William Barr, with both wanting the federal government to have broader powers to spy on American citizens, to spy on you. But after Trump said that he would veto the legislation, no Republicans were willing to vote, Yes, on that legislation. Regardless of your opinion of the president, this is a very good move. FISA powers have been abused by the federal government for decades and decades and after a broad expansion of those powers, following 9/11, it’s, it’s way past time for the government to be reigned in. This is absolutely an abuse of governmental power.

That’s all for tonight. Find us on Twitter and Facebook @facebookbook.com./rtamericaslawyer. You can watch all RT America programs on Direct TV, Channel 321. Also stream them live on YouTube and be sure to check out RT’s new portable app where you can watch all of your favorite shows anywhere in the world. I’m Mike Papantonio and this is America’s Lawyer where every week we tell you the stories that corporate media is ordered not to tell because of their political connections and because their advertisers order them not to tell those stories. Have a great night.